Tim Seeley and Jim Terry’s dark and emotional Dark Horse Comics series continues this week. But did it continue to build on what came before it? 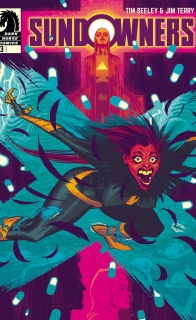 The pasts of the strange “superteam” known as the Sundowners begin to unfold as the Citizen tries to protect a family that no longer wants him, Arcanika is visited by an old boyfriend, and Crowlita experiences visions of a life she prays isn’t hers!

The first two issues of Sundowners had an unenviable task. Setting up an entirely new comic book mythos is a difficult balancing act between the twin challenges of exciting your audience without overwhelming them, and giving them information without drowning them in exposition.

Seeley and Terry managed this feat with aplomb. The titular heroes met under the observation of the enigmatic Dr. Shrejic, a psychologist with a secret all of his own, before introducing themselves and their own personal psychoses in a way that – although they didn’t realize it at that point – hinted at links between the group that we would spend the next few issues exploring.

While the second issue spent more time examining the darker forces at play in their world, an as-yet-unnamed group of equally disparate fanatics headed by the Illuminatrix, issue three pulled us back into the action (and often-times crippling inaction) of the Sundowners themselves. Seeley takes his foot off the gas slightly with this issue as we are offered a look into the real lives behind the masks of our collective of ‘heroes’.

This is the first chance we’ve had to get a proper look at the mental issues facing the Sundowners. Seeley’s dialogue does a fantastic job of constructing realistic characters who feel ‘lived-in’ as far as this world is concerned. With a storyline as shrouded in mystery as this one is it’s integral to give the audience something to grasp onto, and Seeley’s tragically flawed characters are what make this story something truly standout. This issue sees Crowlita tracking the illusive figure of Meghan while struggling with against the ever-present threat of panic attacks, The Citizen confronting his ex-wife about the security of her house, all the while seeking solace in the arms of a women who has long since turned away from him, and Arcanika struggling with some Old-Testament level guilt at the perceived source of her powers.

Seeley’s empathy when dealing with these broken characters – lonely outcasts who appear to have burned so many bridges that they have only each other for comfort – elevates this issue beyond its predecessors and I hope that this is the direction that the series is planning on following. Terry’s art is an invaluable addition to this achievement. His ability to capture and convey mixed emotion in close up facial panels, combined with the energy and entropy he captures in the stances of his heroes humanises them in a way that means that, for all their latex and body armour, we can’t help but see their vulnerabilities. This skill is most succinctly displayed in a stilted confrontation between The Citizen and his estranged wife, in which the switch between his body language as a masked man and as ‘Joe’ is so severe it could give Frank Quietly’s Superman/Clarke Kent study a run for its money. While The Citizen is a goliath of a man, standing tall and ready for action, Joe’s shoulders sag under the weight of his trouble, displaying clearly the life of a man that is tired, confused, and alone.

And that seems to be the primary focus of Sundowners’ first arc, balancing the invulnerability of a lone super-human against the very human need for connection. Seeley and Terry are investigating the idea that, alone, we are all intrinsically flawed but that, together, we can be something more. Whether or not that something is a good thing is explored in the various ways that characters reach out for one another during the narrative. Whether it’s Dr. Shrejic’s support group, doing all the right things for the wrong reasons, or the seductive, cult-like embrace of the Illuminatrix, this story is the poster-child for that old adage ‘No man is an island.’

With less to develop in terms of initial plot-points, Seeley is also able to focus on the nature of a shared reality and personal unrealities within this latest issue. Our protagonists are bound together by their psychoses, alienated from the majority who refuse to see the world as they do. This is a deft demonstration of behaviours often found in cults, and collections of people suffering from real-world mental illness. Seeley’s eerie, almost omniscient narration as his characters attempt to overcome their own personal unrealities has found a great tone that sits on the right side of impersonal without ever being callous. Colourist Sean Dove do a great job enhancing the creepy nature of the Sundowner’s slightly twisted variations on the world with great use of secondary colours – unsettling purples, turquoises, and oranges, instead of the more familiar primary palette – while Terry’s ability to flit between the real world and each hero’s experiences of it often leave the audience wondering what is real and what isn’t.

But, while we may not be sure whether our characters are seeing everything entirely clearly, the risks themselves are well and truly real, as evidenced at the end of last issue with an unexpected and rather gruesome death that would have probably elicited a grim nod of approval from George R.R. Martin for its out-of-left-fieldness. Seeley and Terry have quickly established a dark and dangerous playground for their characters to step into and, even though three issues in we’re still faced with far more questions than answers, the care and detail they’ve put into this ragtag bunch of heroes means that you’d struggle not to make a connection with each and every one of them.

Final verdict: 7.9 – A dizzying and dark foray into the dangerous world of a superheroes’ psyche. If you head into this series you might want to leave a trail of breadcrumbs.