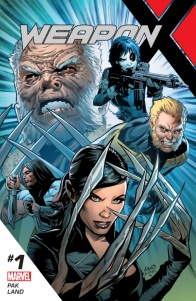 The grouping (they certainly aren’t a team yet) of Old Man Logan, Domino, Sabertooth, Lady Deathstrike, and Warpath, some of Mutantkind’s deadliest members, sounds like the makings of another X-Force. Placing them in a story centered around a shadowy organization with plans to co-opt and gruesomely murder mutandkind also sounds like the makings of an X-Force story. “Weapon X” #1 written by Greg Pak with art by Greg Land, isn’t another X-Force series, contrary to all of these outward appearances. Which isn’t bad.

Trying to do an X-Force story, after Rick Remender’s opus on the inherent moral corrosion and corruption being a member to such a group brings, is a statement filled with finality. Disconnected from that frame of reference,  Old Man Logan bringing together a group of killer mutants to combat a resurgent Weapon Plus program sounds akin to The Wild Bunch. It is also the kind of pitch that sounds at home to Marvel’s stealth limited series publishing strategy. I just wish everything came together to form a better first step on this journey.

First issues are a difficult balancing act, with lots of little things to setup and not many pages to do it in. The first issue of “Weapon X” barely gets anything set and what is set isn’t the stuff that makes this issue an enjoyable unit of storytelling. Greg Pak projects singularly through the view of Old Man Logan, which makes a lot of sense. However, that never points the reader to some kind of turn or operational theme for the series to hang on. There is a sense weariness you would associate with Old Man Logan, or sense of responsibility to try and stop things for once. Instead Logan just kind of acts like a jerk in the end who forces people into fighting with him rather than recruit them.

The issue is an exercise in plot not storytelling. There are kernels of ideas, but nothing that sprouts and unifies it. There is the shattering of machismo for characters like Logan and Sabretooth, these invulnerable men with super senses suddenly unable to trust, except when these moments are undercut by artistic choices that read as unintentionally comical. There is body horror from being a captive of this program, where those who submit to it and are transformed into what appear to be Omega Sentinels mixed with the Terminator. The best art in this “Weapon X” #1 deals with this sudden, horrifying transformation of normalcy into giant killer cyborgs. But nothing in this first issue gives me a reason to care about any of that going forward.

This is going to sound shocking, but Greg Lands art seems posed! It is that frozen quality that lies at the center of the static, layered, appearance of “Weapon X.” While Land is not the sole member of the art team, which also consists of inker Jay Leisten and colorist Frank D’Armata, his pencils are the foundation the others work from. Land’s choice of layout and perspectives favor the body in foreground. Leisten uses heavy lines to outline that body, giving it a sense of solidity. At the same time he uses sparse amounts ink in the middle and background leaving these sections to D’Armata’s pallet. Without strong lines (or lining in general), D’Armata’s pallet lacks definition, leading to vaguely defined colored shapes. In that contrast, the foregrounded body is further centralized and now stands firmly apart from everything. The sequence of Logan and Sabretooth having it out in the forest appears as if their bodies were pasted onto an impressionist forest. That forest background doesn’t look too bad, it just stands out in utter contrast to everything in the foreground. These overarching design decisions make for an overall disconnected aesthetic that undercuts the sense of unity and cohesion these types of book trade on.

This  draws attention to their posing, without a sense of coherence within the frame they just stand out as uncanny. This is on top of other odd emotive choices. Choices like drawing characters conversing with one another seemingly mid blink or with black holes where color should be. Without these windows to the soul, I’m left staring at the rest of the face and the uncanniness continues. Figures are shown with “smiles”(read: mouth shapes) that look more freighting than the ones affixed to the giant killer cyborgs. There are several persons in a library sequence with gestures and faces that strike me as being based off an internet meme due to their absurdity. Old Man Logan for his part is a continually growing mass of wrinkles and little consistent definition.

On a more macro level, page construction varies mightily. There are several pages with interesting and overall readable flow, such as the surrealist representation of Logan’s memories of the Weapon X program and all of those affected by it or two pages with contrasting angular panels which look good in a physical comic. In between these pages are ones with paneled sequences that can be read as discontinuous to the overall action. The most egregious involve a pair of Weapon X cyborgs chasing after Logan jumping down waterfalls and cliffs. These waterfalls and cliffs were not setup in previous panels, suddenly appearing out of nowhere. It is as if these panels were cropped, and in that cropping the perspective was screwed up removing the necessary pieces that create a continuity of action.

“Weapon X” #1 is not a good start to this series. The writing and structure left me wanting. The art is disjointed and baffling at how it undercuts any sort of supposed dramatic tension. This doesn’t even feel like a good first part of a two-part pilot. The first part is supposed to be the setup the necessary objects so the final half can fulfill the promise, but nothing is promising.

Final Verdict: 4.5 – There is the germ of an idea in “Weapon X” #1 but with the price, double shipping, art team, and no reason to care at the end of this issue, maybe it won’t sprout.