The Marvel Universe is positively overflowing with superheroes. There’s something for everybody, a superhero for everybody. We all have our favorites. I like Black Panther, you might prefer Thor. On the flip side of that coin, we all have characters we hate too. For example, Daimon Hellstrom gets on my last nerve. His very presence irks me, you have no idea. Then you probably have plenty of heroes somewhere in the middle. Maybe you’re indifferent to them, maybe you think they’re just alright, maybe you want to like them but can never quite manage. Personally, Black Widow’s right there in the middle for me. 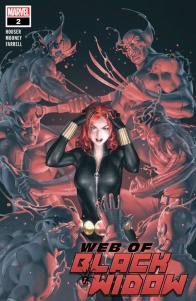 Written by Jody Houser
Illustrated by Stephen Mooney
Lettered by VC’s Cory Petit
Colored by Triona Farrell
SOLDIERS. ASSASSINS. LOVERS. THE WIDOW AND THE WINTER REUNITE! Natasha Romanoff and Bucky Barnes have a history as long as war, companions since the Widow’s earliest days in the Red Room when both were trapped in service to the wrong side. It’s one of the greatest — and most tragic — love stories of the Marvel Universe. Now the world will try to get between them once again. And with the Widow missing memories, she may find herself losing the only person who would have forgiven her for what she has to do next.

I’ve tried to get invested in the character. I’ll admit, there’s plenty to like about her on paper. Her costumes are always sleek and stylish. She’s resourceful and can be absolutely ruthless when she needs to be. Plus there’s something to be said for superheroes that go toe to toe with ‘gods’ relying on just their skills and smarts. The biggest roadblock for me is that each of her comics seems intent on telling the same story.

Natasha’s MCU depiction was kind of all over the place but when I think of the character, I always come back to that one quote from Avengers. “I’ve got red in my ledger, I’d like to wipe it out.” That’s the story that Black Widow keeps coming back to. Some variation of righting the wrongs of her past and “Web of Black Widow” #2 is no different.

To the credit of this comic, I think that this latest variation is one of the better ones. It’s a good, well-done issue but we’re still checking a lot of the same boxes for a Black Widow story. In all fairness, you always expect Nat to be secretive and for there to be espionage in a Black Widow story. She’s one of the Marvel Universe’s best spies after all. Still, within the first three pages we’ve got a flashback to Natasha’s training in the Red Room. Again.

Black Widow finds herself at odds with one of her fellow heroes for the umpteenth time. It’s kind of funny when you think about it. One minute, Nat saves the world with the Avengers, the next she’s more than ready to knock her teammates out. In Mark Waid and Chris Samnee’s run on “Black Widow”, Natasha came into conflict with Iron Man. She actually was at odds with Tony again last issue but this time around, she comes to blows with Winter Soldier.

Bucky shows up fairly often in her titles, whether they’re together or not. With him, you see one of Natasha’s great loves and we get to see how haunted she is by her past. Two birds, one stone. Natasha’s past always comes up. She’s defined by it. Sometimes it’s routine, sometimes it’s interesting, depends on the creative team. Her past is the driving force behind the lion’s share of her stories, this one included. Here, Natasha’s trying to separate those she made rich in her Red Room days from their ill-gotten gains. It’s all poison and she’s going to burn it all down. It is fun to witness here and a bit of a new twist on what we’ve seen but when is Nat finally going to get all the red out of her ledger? You’d think she’d be about done by now but apparently not.

The artwork is really one of this issue’s greatest strengths, making the comic even more enjoyable. There are some great little touches. Nat’s swimsuit having an hourglass symbol might not be practical (especially for a secret agent) but it is stylish. In one page, Mooney effectively sums up the history between Barnes and Natasha. The blank silhouettes give readers a look inside of the heroine’s mind and are great visual short hand for Natasha’s incomplete memories.

Artist Stephen Mooney’s style has a spy thriller feel to it that’s especially fitting here. It’s cool seeing Natasha cut through a window with a laser and glaring as she’s half-underwater in the final panel. There’s other great moments too like Widow snatching a security guard into a supply closet in the background or seeing the imposter Black Widow (ten bucks says it’s Yelena Belova again) posing with a smoking pistol On another note, it’s important to remember that Black Widow isn’t a quippy hero like Iron Man or Spider-Man. She’s a spy. Natasha doesn’t really need to be heavy on dialogue or really have any dialogue since espionage is often done in silence. Mooney makes sure it’s fun to watch her work. Black Widow’s actions are violent but she moves very gracefully and you can see her ballet training when she does a flip-kick or dives out of a window. The fight scenes are all engaging and full of energy. This is a solid comic though I do hope the creative team goes somewhere new in the coming issues.