Webcomics Weekly is back in your life. This Week: A heartfelt scene of friendship is interrupted by a GIANT SPIDER in “Agents of the Realm.” The Obligatory Guest Artist Webcomic Duration continues in “Sam and Fuzzy.” The adventure continues in “Tigress Queen.” Things get surreal in “Warm Blood” and their many artists.

“Agents of the Realm” has entered a well known phase in the structure of team based anime or manga, especially where some sort of magical evolution or form change is involved. Sequences tend to go like this: normal stuff is happening until that normalcy is shattered by the supernatural and whomevers turn it is to get the big transformation sequence saves the day. At least the first half of Sailor Moon and Digimon is dedicated to running the various chosen ones through that structure, and I love it. In the case of “Agents of the Realm” it’s time for Adele Silveira to get in the game and save her new friend and roomie Norah.

While this batch of pages eventually take a more action heavy stance, the first more interpersonal half is what really got me on a content and craft level. As Norah and Adele get to know one another, it provides another chance for Louis to work in her “That C+ can be valid” aphorism that undergirds the can do, try your hardest, attitude in “Realm.” Silvermount isn’t the most prestigious place and her parents could afford to send her plenty of other places, but it was the school that accepted Adele. As she says “If this is where I got in. Then this is where I’ll go. This is still my opportunity. I want to make the most of it.” It’s an interesting contrast with Norah who is staying local, yet clearly dreams of moving away even if she doesn’t think she’s read for it yet.

This sequence would be an easy walk an talk, and it is at first. Eventually the two roommates stop to admire window merchandise, and the cartooning craft of Mildred Louis comes through again. The rest of their conversation is them stationary, but because they’re in front of windows we get glimpses of their facial expression! Louis use of their reflections and overall body language takes what could be a visually boring sequence and makes it engaging. In many ways the visual language of this sequence operates as the inverse of the previous Skype heavy sequence, but towards the same end goal.

Of course, the supernatural and drone Jade Blackwater must intervene making for an awkward end to a heartfelt sequence but such is the life of a Agent. Instead of a monstrous bear, Norah finds herself confronted by a not so itsy bitsy spider. The spider reveal is the best part of this sequence as Louis plays with the natural darkness of the alleyway to mask the spiders form. The general shape is there, highlighted by crystal formations on its body. Louis gets some solid cartoony facial reactions, but the overall sequence is a bit standard. Not bad due to a throw lacks the crisp spatial awareness of the previous Bear sequence. It’s all setting up for Adele to do something magical however, and that tease was quite effective. 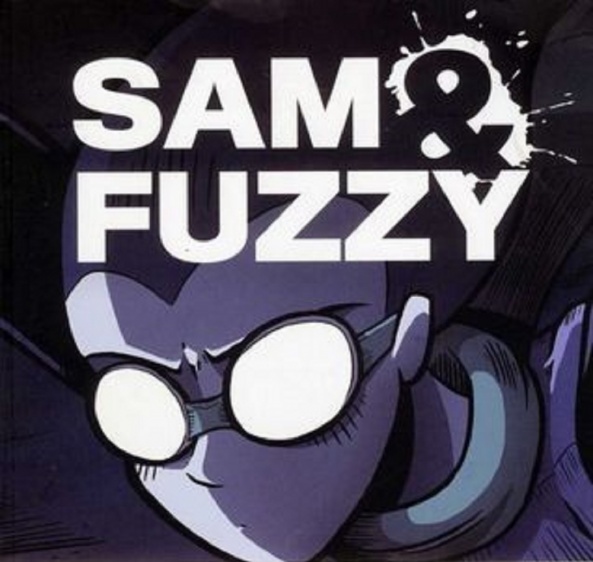 “Sam & Fuzzy” presents an odd challenge this week. The ‘Obligatory Guest Artist Webcomic Duration’ in its sixth volume is a collection of guest spots for a series that has been running for a very long time. In the blog post accompanying each installment Logan himself notes that a number of these reference a previous version of the webcomic–previous versions stretch all the way back to 2002. With a lack of context and too large a tome to pour through for a broader knowledge some of these will go right over the head of any readers starting where my reviews began, and Logan seems content to leave the viewer confused.

That said, there are a couple of rather fun entries within ‘O-GAWD 6.’ Michael Stearns brings back Bitey the Shark and makes one nostalgic for the 90s. Its a short bit, but exactly the kind of meta-commentary one wants in a round of guest-artist-stints.

KC Green contributes one of the more fun collections of panels as the titular characters deal with a ghost and his existential crisis. While these reviews generally refrain from worrying about spoilers this particular post is worth reading yourself whether you’re familiar with the series or not.

There’s so much here that is worthy of praise but you should really just dig in yourself. You can use the link above to drop you right in to ‘O-GAWD 6.’ One other noteworthy contribution is the 2-panel GIF presented by Andrew Hussie. Hussie is the creator of “MS Paint Adventures.” The action panel provides a very simple representation of a ninja battle but it is beautiful to look at.

‘O-GAWD 6’ is a nice reprieve from the core series before we begin ‘Inhuman’ in two weeks. Enjoy the fun and remember. It’s MADE. OF. CORN. 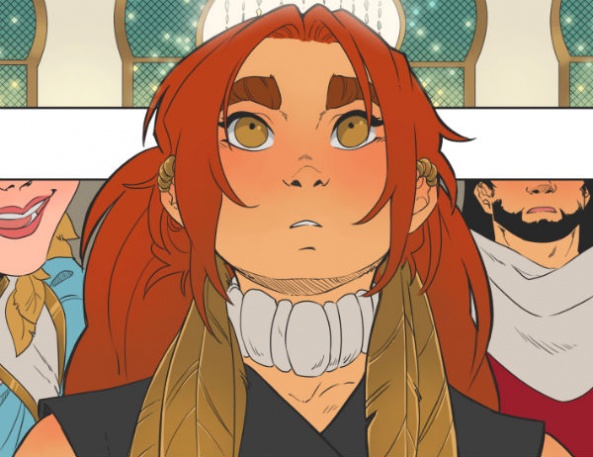 When we last caught up with the adventures of warlord Kizarasunga, she had just reached the capitol city of the Jaezian empire. Initial banter among the royal family, Kizarasunga, and her warlord entourage was at an all-times high, but still in a respectful manner, despite its protocol nature.

Artist Allison Shaw is doing a phenomenal job at this series, which is only impaired by the somewhat slow pace of recent updates. The world building is gradual and free of exposition, as readers learn of this world alongside the main characters. Visuals are stunning, walking the thin line between the cartoony and animated style, versus the more realistic approach to architecture and surroundings.

For this particular set of updates, it was intriguing to see a more subdued, almost naive, way to Kizarasunga. She marvels at items absolutely mundane to the empire (like the coloured glass windows of the throne room), and seems to be warming up to the idea of knowing this culture a bit better. On this regards, Shaw’s work on facial expressions is really good, leveraging off the animated style and very large eyes to maximise emotions.

Plot-wise, there is not much at play here, with this update to “Tigress Queen” being very much a slow-burn. That would not be bad unto itself, but the delays on update might turn some readers off, expecting a more fast-paced rhythm.

A note worth mentioning: the craft around lettering on this issue was really above par. There are some clever uses of fonts to generate a “voice” to certain characters, are it is even used as a visual narrative flow on some pages. Not usually seen, always appreciated.

All in all, another solid update for “Tigress Queen.” Those eager for world building, culture clashes, and character building are in for a treat.

I’ve been wanting to check out Josh Tierney’s “Warm Blood” for a while, since first seeing “Hunters” a year or so ago. Why? Well, just take a look at the credits list above. Notice anything a bit. . .odd? Well, that’s because, just as with his other projects, every scene is drawn by a different artist. It’s quite clearly a conscious choice, rather than the churn of artists at DC or Marvel, creating this patchwork of visual styles that should clash but, by this point in the narrative, are the constants that ground the story. It also gives “Warm Blood” the exact tone it needs.

The story of “Warm Blood” is surreal and while it is graspable, Tierney is light on exposition, thrusting you into the world of Penny and her wildly eclectic friends, acquaintances, and enemies. There’s a killer on the loose that no one knows the identity of. . . except it’s revealed in the first scene of the first chapter and no one bats an eye. There’s a shrimp person and ghosts and aliens probably exist but it all rolls off the characters like water off the back of a duck. It’s not normal for this world but the characters seem just affected enough to create an atmosphere of unease around every strange interaction and every event.

What’s most important to the story of “Warm Blood” are the characters and their interactions. Take out the surreal horror and what you have left is a slice of life, romance comic that’s done exceptionally well. ‘Blackout’ is a great example of this, as there are “ghosts” but we never see them and instead we have a pizza party with Penny and her friends, an embarrassing rom-com moment that gets Penny to walk farther down the road towards realizing her feelings in full for Eve, and a development of the greater mystery regarding the killer. There are times that the dialog is a bit too esoteric for my tastes — a bit of exposition can be helpful for understanding a scene.

Also, while all the artists are wonderful, and I love the showcase aspect of “Warm Blood,” exposing me to a whole new slew of artists, the coloring on Greenia’s stood out in a way that didn’t meld super well with the rest. It’s a bit too bright, with an orange/pink palette, surrounded by cool blues and less saturated purples and yellows. But, again, that off-kilter feel is exactly what this comic thrives on and is a testament to the character designers for these characters so that they remain distinct, even across the many, many styles.

If surreality and confusion isn’t your bag, this won’t be the comic for you but if, like me, you’re sucked into the weird world of “Warm Blood,” this chapter does not disappoint.

Interview with a Webcomic: Zach Weinersmith on the Daily Grind, Nerdy Comics, and Being Around Since 2002

Welcome back to The Webcomics Weekly! It’s been a hell of a couple weeks and it looks like we’re in for a while more. I hope you’re all safe and healthy, and that your loved ones are too. With the news of Diamond stopping their shipments, it seems as good a time as any to […]

The Webcomics Weekly marches on towards its centennial column and continues its mission to inform you of the variety and interesting webcomics out there. This week, I continue my treck through “Trekker” and reach the peak of “Agents of the Realm” volume 1 pages 234-238. Elias brings us a look at “Bheapjack Gentlemen.” Jason conintues […]