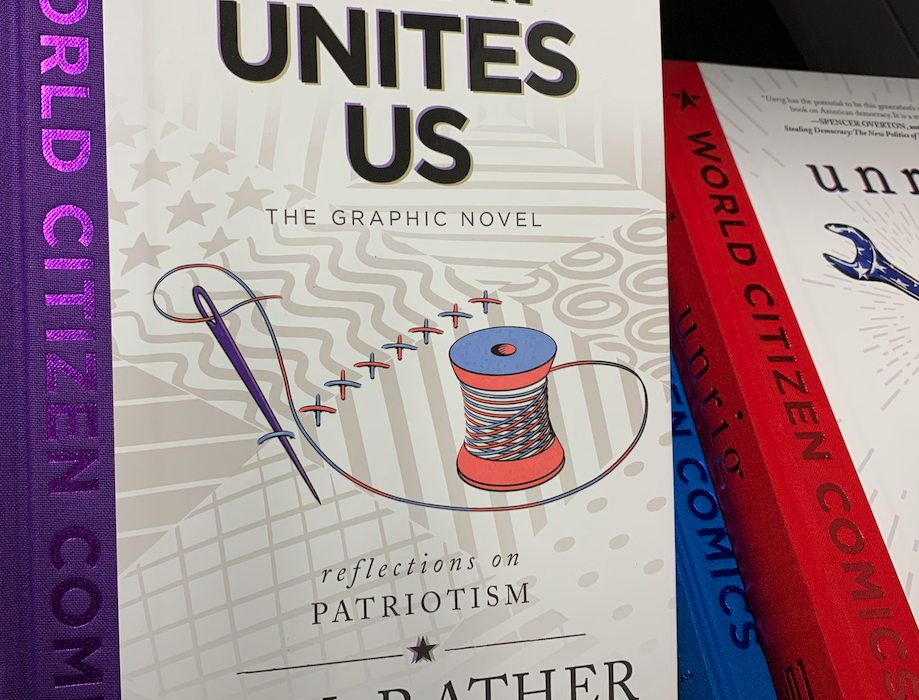 Patriotism as an American virtue has been in a desultory state, its vocal defenders and crassest arbiters so often using it as a cudgel. Reviving patriotism as a nuanced, democratic, and self-renewing thing is an art pulled off by only a few, those rare political and media figures who, even if flawed and susceptible to critique, still have the credibility of their convictions intact. Enter Dan Rather. 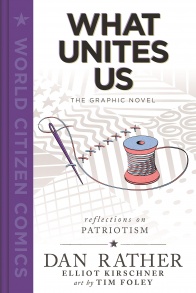 Written by Dan Rather and Elliot Kirschner
Art by Tim Foley

In this graphic novel adaptation of his bestselling collection of essays, legendary news anchor Dan Rather provides a voice of reason and explores what it means to be a true patriot.

Brought to life in stunning color by artist Tim Foley, What Unites Us: The Graphic Novel takes apart the building blocks of this country, from the freedoms that define us, to the values that have transformed us, to the institutions that sustain us. Rather’s vast experience and his unique perspective as one of America’s most renowned newscasters shed light on who we were and who we are today, allowing us to see a possible future, where we are one country; united.

Somewhere in the mid-2010s, long after my cohort and I stopped consuming TV evening news, amidst gathering clouds of Trumpism, Dan Rather’s Facebook posts started showing up on my feeds, reposted by late Gen-Xers and liked by Millenials, perhaps with some relief that at least one bygone media stalwart seemed to muster the courage and outrage that more should have voiced.

A decade prior, around 2005, the longstanding evening news anchors of ABC (Peter Jennings), NBC (Tom Brokaw), and then CBS (Rather) all departed their desks from retirement, death, or in Rather’s case, some controversy. We didn’t know then what a significant watershed moment that was in our fourth estate, after which the splintering of the body politic by cable news would then fracture inexorably into the hyperpartisan shards of social media enclaves. Brokaw, Jennings, and Rather might be rightly considered the last of their breed.

In countless ways, we are better for moving on from the mythic evening news anchor as the single, comforting, (WASP-y) voice of assurance and authority. Yet the array of sources filling that vacuum in our civic discourse– everything from Buzzfeed to Steve Bannon, from late night satirists to talk radio blowhards, from trolling bots to Youtube demagogues– has patently exacted a toll on the coherence of our democratic beliefs, and our democracy itself.

In 2017, probably rejuvenated by the warm embrace of his social media conspiracy of common sense and decency, Rather published “What Unites Us: Reflections on Patriotism” with collaborator and filmmaker Elliot Kirschner. For the past year, graphic novel impresarios First Second have been publishing the “World Citizens Comics” series, tackling topics like fair elections and campaign finance reform. The series has paired comics illustrators with well-regarded civics authors, but Dan Rather is doubtless the most widely known of the set.

“What Unites Us: The Graphic Novel” is Rather and Kirchner’s book set to comics art by freelance illustrator Tim Foley. Like its siblings in the series, “What Unites Us” reads more like illustrated comics essays in “The New Yorker” or “The Nib” instead of the narrativized journalism of Joe Sacco or books like “They Called Us Enemy.” The other “World Citizens Comics” have been deep dives into particular civics topics, but “What Unites Us” is more sweeping in scope, as Rather’s presence and voice in the graphic novel furnishes an argument for a progressive brand of patriotism through appeals to history, memoir, ideals, diagnoses of what ails us, and prescriptions for hopefulness.

I couldn’t help but ponder, as I read, what advantages were gained from adapting Rather’s reflections, reminiscences, allusions, and arguments to comics form. Perhaps it’s as intuitive as Rather’s Facebook posts, those genre-mashups that merge the evening anchor’s fireside tone with the shareability of a newsfeed post.

If so, Foley’s art does an effective job of punching up Rather’s prose with drawings that are clean, allusive, tonally matched, and at times, poignantly emblematic, like a masterful score to a documentary that neither overwhelms nor leaves naked the subject matter’s affective layers.

I think the comic is more than a soundtrack to Rather’s musings, though. The speech balloons are few: a moment of Rather’s Scott McCloud like voice-over here or there, a brief memory of what his mother used to say. But the cartoon Rather who takes us through these ideas, these historical precedents and grand democratic principles, these snippets of autobiography and snatches of journalistic reportage, become a visual companion to the authorial voice that is also imprinted in the book’s language.

The two prior “World Citizen Comics” (which are hefty and handsome volumes, by the way, and all grace my shelves) provide good alternatives. The authors of “Fault Lines in the Constitution” (2020, First Second), Cynthia Levinson and Sanford Levinson, clearly have a perspective and a voice, conveyed through cartoonier but equally effective art by Ally Shwed. But the Levinsons don’t appear as characters in their comics adaptation, allowing Shwed to employ a hint more diagram, caricature, and un-narrated storytelling (like a nearly wordless rendition of 9/11 before expounding on continuity of government).

In contrast, in “Unrig: How to Fix Our Broken Democracy” (2020, First Second), author George Newman is present on almost every page (and at one point, three of him in a panel!) describing his advocacy and reporting on election finance and reform proposals. Artist George O’Connor brings Newman, rumply plaid shirt and plainspoken good sense, to vivid life, and his propulsive argumentation drives the whole book.

Rather is a larger-than-life personality but also wants to rest the gravity of his argument not on his own compelling authority, but the weight of history, of virtues hard-fought, of the best and not the basest of the people’s faith and effort. Foley isn’t just tasked with illustrating ideas or “drawing” infographic-ish conclusions, but of echoing the historical resonance of the defining moments and movements upon which Rather rests his disquisitions: Nixon and MLK, suffragettes and space missions, freedom riders and founders, playwright Horton Foote and the principal of his Houston elementary school.

To those ends, Foley’s stylistic steadiness also contains just enough formal flexibility to echo Rather’s seriousness while employing some useful tonal variance. The same ink-line with which Foley draws a spot-on Dan Rather, with zero excessive strokes, gets used to convey respectfulness to the wide museum of figures who populate nearly every page— the Hamilton cast, LBJ, Ella Fitzgerald, Elon Musk, and on and on.

There’s plenty of montage effect that is well-served by Foley’s pen, neither too fastidious nor abstract. But in other places, such as a Chibi-like illustration of the “I Have a Dream” speech promissory note concept, or Comic Dan Rather standing atop hills of multi-color mosaics to proclaim that superior metaphor over the “melting pot,” we get Foley putting comics’ visual versatility to really potent use. This book is Exhibit A to why comics are a medium par excellence for the visual versatility between the conceptual and concrete. Foley’s art and Rather’s voice are sublimely complementary.