Coming off the back of Marvel’s last big comic-book event “Original Sin”, and teeing up for yet another Marvel-verse shaking crossover with the ‘March to Axis’ issue #6 of “Loki: Agent of Asgard” has a lot to tie together in twenty-something pages. It could have been a filler issue or a joyless vehicle for exposition, but Ewing, in a style befitting of the god of Mischief himself, shrugs the burden of responsibility in favour of starting this second narrative arc with some rather brilliant misdirection. 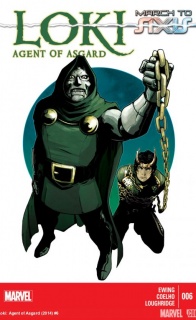 Loki’s back from the Tenth Realm, and facing his greatest challenge yet! Can you say Doctor Doom? But with Valeria Richards in the mix, who’s the hero of the story? And who’s the villain?

If you’ve been following “Agent of Asgard” without picking up the additional “Origin Sin: The Tenth Realm” side-books then you should still be fine to pick this issue up without a preparatory trawl through Wikipedia. Suffice it to say that the young Loki we left, after a heist of Asgardian proportions, is safe and sound after a friction-filled family reunion with Thor, Odin, and a host of other faces — some familiar, some all-together new. But, as “Agent of Asgard” #6 picks up it seems that Loki is more focused on fixing the fractures that his treachery has fostered between himself and his Midgardian family.

This issue opens in Latveria, in the wake of yet another cross-comic event. Up until this point “Agent of Asgard” has been concerned almost exclusively with Asgardian life but, for the first time, we’re opened to a more Marvel-specific element of the mythos: the hugely under-utilised man of mystery, Victor Von Doom.

Doom, in his seemingly infinite wisdom, has seen the threat of a god roaming freely amongst mortals and decided that a show-down is long overdue. He summons Loki to his citadel with a view to confront him about his plans for the future of Midgard, without realising the true level of internal conflict that Loki is experiencing. Ewing’s inclusion of Doom is definitely a welcome spanner in the works as far as “Agent of Asgard” is concerned, as Doom is the perfect foil for Loki; if Loki is silver tongued, then Doom’s speeches are coated in cold steel. He uses words as an offensive weapon with which to damage and disorientate as part of a concentrated attack. He’s a legitimisation of the villainous trope of monologuing that has been criticised and parodied for years on end.

Ewing’s Doom is an acrobatic balance of Neil Gaiman’s Sandman and Alan Moore’s V. He talks, in no unsure terms, about the importance of leaving a literal legacy as well as one set in legend, and provides Loki with a rare opponent who can match him both in terms of power and histrionics. Coelho, for his part, manages to emote beautifully – despite the limiting nature of Victor’s mask – by working almost exclusively through body language. His ability to convey Doom’s dominance and Loki’s first real physical struggle definitely makes his audience stop and take note of the power of Latveria’s current monarch.

So far this series has been a decidedly dualistic beast, playing its eponymous protagonist (The word ‘hero’ doesn’t ever really seem applicable when you’re dealing with Loki) in a battle of wits against the one opponent who can keep up with his dastardly machinations: himself.

Running off the success of the Tom Hiddleston’s hugely charismatic reinvention of Loki as more of an anti-hero than straight-up villain, the focus of “Agent of Asgard” has been largely on a young, charming, and seemingly legitimately penitent version of Loki. This teen heart-throb incarnation of Odin’s second favourite son has come straight from the pages of Keiron Gillen’s well-received run on “Journey into Mystery”/”Young Avengers”, and Ewing and Coelho has managed to capture the character’s youthful fascination with the world of Midgard as well as the quip-heavy speech patterns that make him seem a good deal wiser than his years – biologically speaking, at least.

The thing that has stopped this book getting lost amongst the sea of teen-helmed titles that Marvel are currently flooding the market with is the way Ewing balances the lightness of young Loki against the shadowy influence of old Loki. There’s a very distinct brand of darkness that Ewing spreads from behind the main action, and Coelho’s weatherworn, emaciated framing of the classic villain is a perfect accompaniment to the ‘old man of riddles’ persona that Loki has fashioned for himself.

While the previous arc followed Loki’s attempts to atone for his past sins against Asgard, this new run seems to be focusing on securing his future. Ewing’s obvious understanding of the character of Loki is what makes this series a deeper and more appealing read than the initial brief might have led readers to believe. Both the young trickster and the old man of riddles have been fleshed out to a point that demands empathy for their respective positions, either sides of a sliding scale of good/evil. Ewing has bypassed both the Golden Age cackling villain and the Cinematic brooding anti-hero to create a new collection of Lokis for a new age in Marvel. A perfect characterisation for a world that no longer allows its supers to simply fall into black and white categories, both young and old Loki exist only in shades of grey, and both are yearning for a world where they can be known as unequivocally ‘Good’ or ‘Evil’.

The inclusion of Dr.Doom shows that – unlike the architects of the MCU – Ewing and Co aren’t convinced that Loki is the only interesting villain that Marvel has to offer. I look forward to watching the inventive way that Loki worms his way out of scrapes with the less morally obligated characters that Marvel has in its roster.

Final verdict: 8.2 – A great balance of pop-comics and darker, manipulative storytelling. This is a must read for fans of talented trickery and verbose villainy.