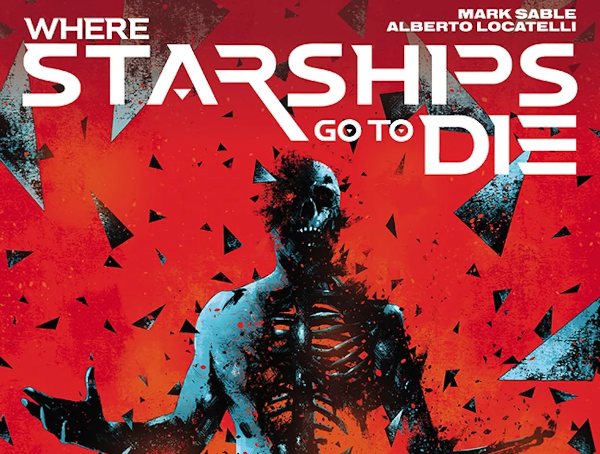 “Where Starships Go to Die” #1 definitely goes for glory in this story, pulling from climate apocalypse, deep space, deep sea, and alien invasion themes to put together a plotline that has the makings of an epic tale. While the story has its high points and is nothing if not ambitious, at times “Where Starships Go to Die” #1 perhaps flies too quickly and too recklessly into the unknown. Let’s gaze upon this beautiful beast of a story and try to make sense of it all. 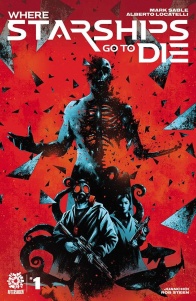 Point Nemo – the farthest oceanic point on earth from any landmass. A spacecraft graveyard where rockets and satellites can be safely ditched on the ocean floor. In a near future ravaged by climate change, an African astronaut teams with an Indian shipping magnate to mount a dangerous salvage mission to recover the wreck of humanity’s first interstellar starship. But what they find is beyond their worst nightmares.

Like we said, “Where Starships Go to Die” #1 tries to have its cake and eat it too when it comes to grand settings and novel ideas. Things kick off in the year 2075, which is some number of years after a global war, converging with a an ongoing climate crisis, has lead to near apocalyptic conditions, at least South Africa, which appears to have been a fulcrum for the war. What’s nice here is that the intersection of climate crisis and global war feels like a believable end game for humanity, and the ragtag nature of the world, although we only get it through glimpses, feels interesting. So many apocalypse stories go so far in the direction of total civilization destruction and identity unravelling that it gets exhausting. Listen, we love a Mad Max style story, but “Where Starships Go to Die” has a little more nuance. Some of the world is in shambles, while other parts have chugged along, with the victors mostly residing in the global north. What remains is a ersatz world of superpowers, multinational corporations with untoward power, and everyone else trying to live off scraps in a sweltering, stormy world.

This is all pretty cool. One thing to note is that a lot of the history/lore of “Where Starships Go to Die” #1, and hence a lot of the world building, happens in the declassified file postscript of the comic, and not in the comic panels themselves. This is too bad, because if some of that content had been seeded in more intentionally or more deftly, the off-page threats in “Where Starship Go to Die” #1 would feel more menacing, or at the very least more contextualized. Instead, we get talk of “China and the US closing in” on the protagonist’s position, but without any knowledge of what that threat’s about, it just feels a little hollow.

We’ll be the first to say it, we think merging themes of deep space with the deep ocean is a lot of fun, as both settings are rich in intrigue and the kind of primal fear of the unknown they invoke in us. However, “Where Starships Go to Die” #1 ping pongs a little too fast and a little too hard between the two, which leads to some breakneck pacing that in our opinion leaves the audience behind. For example, our main protagonist Captain Samkelo “Sam” Dlameni starts the story by sneaking into the abandoned headquarters of the South African NASA, and somehow finding a working screen while listening to the news, which is eagerly awaiting a transmission from the Daedalus, a manned spacecraft sent many years ago that should be in orbit of a habitable planet. Why he’s watching a screen while waiting to listen to an audio transmission doesn’t quite make sense, but when the enigmatic leader of a ship scrapping company shows up, it makes more sense. We need the screen because we need to see some images to go along with the exposition, and after we see that the Daedalus actually crashed into the ocean when it should have been light years away, Capt. Samkelo gets whisked away into a submarine to search out. The pothook of finding this sunken spaceship (and the promise of flying it again) is undoubtedly fun and a good premise, but it just goes so fast to the point that it’s hard to get attached to characters or care too much about what’s going on.

Genre fans will probably gravitate towards “Where Starship Go to Die” #1 based just on the sheer ambition of its premise, and if they’re willing to handwave some of the pacing and exposition, they’ll be in for a good time. There’s nothing catastrophically bad about this comic, but there is certainly room for improvement and we’re eager to see where things go in the next installments.

Final Verdict: 7.0 An ambitious romp into the twin depths of space and sea that’s hampered by pacing and plotting issues.