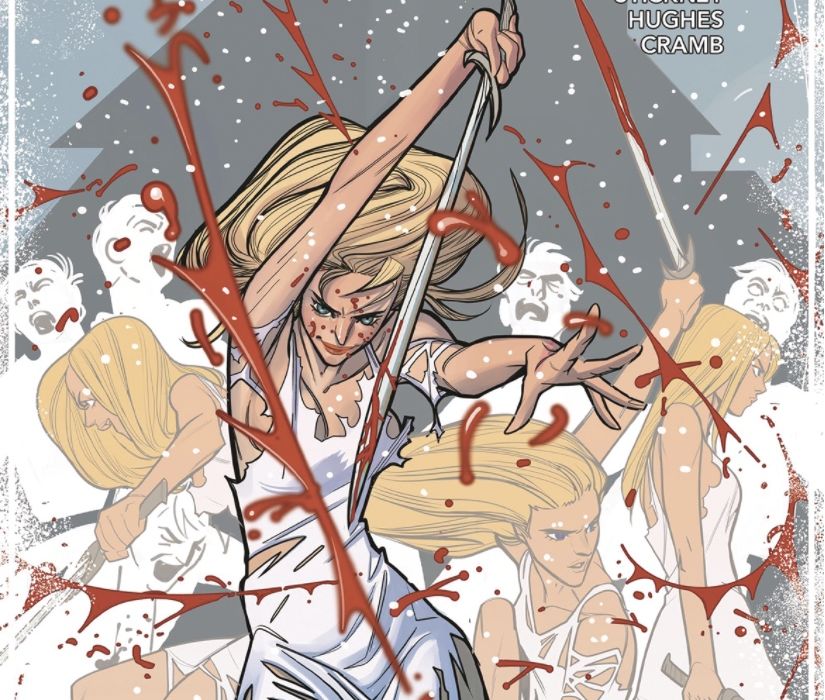 Aleck’s been plunged head – or is it neck? – first into a world of dwarves, elves, monsters and intrigue. He seems to be handling it pretty well, for a half-dwarven, moody college kid. Warning: spoilers ahead. 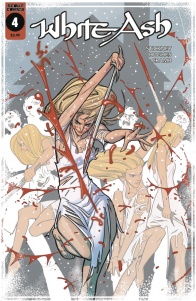 Cover by Connor Hughes
Written by Charlie Stickney
Illustrated & lettered by Connor Hughes
Colored by Fin Cramb A tragic death leaves the residents of White Ash reeling. More of the Town’s secret past is revealed as we get our first glimpse of the “Longest Night.” The incomparable Glarien makes her debut appearance cutting a bloody path on to the scene.

“White Ash” #4 continues the heavy lore lift of the previous issue, but the info delivered – and the comic’s premise – are interesting enough to keep us along for the ride. Stickney and Hughes clearly put a lot of care into fleshing out this fantasy world, and the scaffolding doesn’t come through lengthy monologues or repeat flashbacks. There’s just the one at the beginning of the issue, and that’s the correct narrative spot.

Instead, we get bits and pieces layered throughout the book. Issue #4 is packed, true, but what we learn also gives us more insight into the people around Aleck. Thane’s transformed from an elitist, pigheaded jerk to a wounded, elitist, pigheaded jerk in short order. His honor matters enough to him that when pressed, he will do the right thing for Aleck and his father – at least, for now. Interestingly, we don’t have to wait for a handful of issues to see the elves display dimension beyond their arrogance. The dwarves aren’t immediately angry and drunk, and even the Brood are more interesting and faceted than we expect. It’s almost as if the creative team knows the tropes they’re playing with and wants to push past them to get at the heart of the story. This kind of care and attention matters, especially in a comics market choked to death with genre books. There are a few plot points that remain unclear, but not so murky that we get lost in confusion, and a nice mystery set-up for later issues.

Hughes brings a lot of strengths to “White Ash.” Perhaps the most compelling is the facial detailing and style. Aleck’s bristly personality doesn’t obscure his naivete or make him so much of a jerk that he’s hard to relate to. Hughes’s art is the main vehicle for Aleck’s youth and genuine emotion. The gentler moments and smaller panels, like his earnest concentration as he pours the antidote into his father’s IV bag, make the character come to life. Hughes also does a decent job balancing cheesecake and (relative) youth in Lillian, although there’s some inconsistency in profile panels at times. Thane’s appropriately patrician and disdainful, though he softens in key moments to create sympathy. Hughes also pays careful attention to background detail and makes sure no bit of space is wasted.

The main artistic challenge in “White Ash” is that the team tends toward crowded pages, and this can get in the way of some otherwise cool attempts to be stylish or meaningful. Throughout the book, Hughes’s lettering is straightforward, with a few nice flairs like the heart monitor overlay as Gunther’s life hangs in the balance. The final panels that feature the monitor sound don’t do this sound effect any favors, though, even if the intent is to create chaos to quicken our reading pace. The sound effect acts as the strip borders on these two pages until the final stacked panels. The sound effect tapers off evenly across the page, and from there our eye should travel down to the bottom right corner. However, the panel borders break with the effect and slant up, breaking our concentration. The next panel in our reading order is above the end of the sound effect, but it feels out of place now because the line is disrupted. There are a few ways to do this differently, but the simplest would be to square the borders of these two panels to slow our reading pace and maintain that visual symmetry with the sound effect. The moment of action is over, the resolution is clear and our eyes can take in Aleck’s grief at our leisure.

Analyzing a final product can be a bit like reading tea leaves, and subscribing intent or responsibility for any one element isn’t as simple as it seems. The overall crowding could be down to a lot of things: script, artistic preference, editorial intervention. We don’t know, and it’s often easiest to attribute all decisions to the artist, but it’s also often incorrect. What’s certain, though, is that Cramb does a lot of work to pick out details and clarify the book to build mood and to give us a bit of visual space. The funeral is a good example of what a colorist has to balance. The scene’s rich with deep woody tones that establish a lived-in aesthetic for the dwarves and provide a good backdrop for a lot of character faces and physical details. Group scenes are tricky, and we can easily be overwhelmed by an explosion of textures or underwhelmed by a sea of anonymity. Cramb’s work shines here and in many other places, and gives “White Ash” a lot of style and clarity. There could be more unity in the overall palette but that can also be built over time – and Cramb is doing well to gradually hone in on what works and what does not.

Overall, “White Ash” is an enjoyable comic backed up by good execution. The book builds intrigue without forgetting the personal depth of its story, and it delves into horror and fantasy while delivering some cuteness. The team’s not afraid to draw on our sense of wonder and curiosity, and that’s a balm to a jaded comic fan who’s a little cyberpunk-ed out at the moment.

Final Verdict: 8 – “White Ash” #4 does its world-building and plotting in equal measure without forgetting its emotional core.