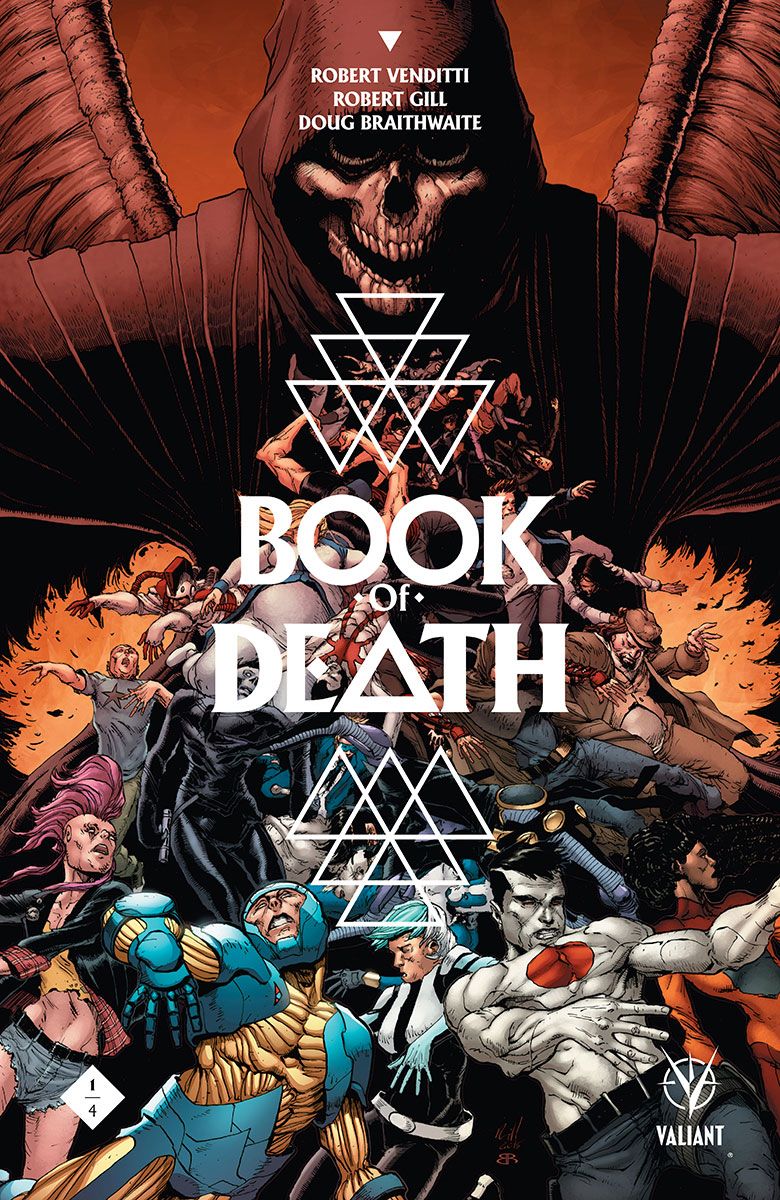 The Eternal Warrior is on the run, protecting a little girl who may hold the key to the world’s salvation. Unfortunately, her powers also cause the destruction of any town she approaches. Will Unity track down their founding member and stop the girl’s massacres or will they just write themselves a new chapter in the Book of Death? Find out in our spoiler-ere review! 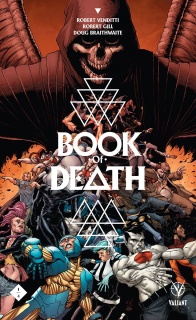 “A coward dies a thousand times before his death, but the valiant taste of death but once.”

Now we know. The Book of the Geomancer has recorded it all. But only a young girl – the last in a line of the enigmatic mystics who protect the Earth known as Geomancers – has seen this future come to pass, from the coming cataclysm to the dawn of the 41st century. Alone with her sworn protector, the Eternal Warrior – a soldier battle-forged across five thousand years of combat – the duo must defy their allies to stop the Dark Age that now threatens to eclipse our world.

Together, they are the number one target of every hero and villain on Earth. Either the Eternal Warrior hands her over…or they take him down. But can even he single-handedly protect one child when the entire Valiant Universe wages war against him?

While reading “Book of Death”, I realized I had made a terrible mistake. Namely, I had never read a Valiant Comic before. I heard they were fantastic and decided to jump into them through their latest crossover. Surprisingly, what I found was a pleasingly succinct comic with believable characters and two art styles that were, at times, wonderfully disturbed.

What’s nice about “Book of Death”, is that it `doesn’t assume the reader has read all of Valiant’s comics. “Secret Wars” for example, is somewhat dependent on the continuity of a three year long series that turned some fans into Grandpa Simpson at the burlesque club. “Book of Death” certainly relies on continuity, not surprising since Valiant as a company thrives on its tight-knit continuity, but the crossover goes to great lengths to not kill its momentum for the sake of exposition. Instead, it presents a story we’ve kind of seen before (ronin wandering around and protecting some magic child) and uses that to explain its consequences on the rest of the Valiant Universe, seen in bits through an ominous flash forward. That said, “Book of Death” still stands on its own with great characterization and energetic storytelling. Speaking as a new reader, “Book of Death’s” slow tease of the rest of the Valiant Universe, rather than a flood of infodumps, made me want to explore all the other Valiant comics in order to enhance my experience with “Book of Death” instead of fix it. It’s the difference between crossover tie-ins making the main story feel bigger and making it feel incomplete. “The Book of Death” is certainly not incomplete.

“Book of Death” is (surprise surprise) kind of creepy. Especially for those with insectophobia. Robert Gill’s use of insects and scorpions in a major fight is a unique type of superhero fight that isn’t really seen much these days. Giant scorpions are all the rage in stuff like Fallout 3 and, uh, Fallout: New Vegas but an honest to god army of tiny scorpions? That’s a whole lot scarier than one big monster, if only because it feels more real. It also comes at the worst possible moment for Unity and The Eternal Warrior, who are having one of the most legit beefs in comics. Eternal Warrior wants to protect this girl because he’s lived through the Spanish Inquisition and ET and has seen what people do to those they don’t understand. Unity, meanwhile, wants to stop all the people who are dying because this girl can make trees come alive and stab people. Hero vs. Hero fights have been played out for a while now, but an honest clash in interests can spice up any cape fight.

Okay, that fight might sound a bit more uneven than I made it sound, but those who’ve seen the girl’s passage from the titular book would probably side with Eternal Warrior too. The sequence, illustrated by Doug Braithwaite, depicts the Valiant Universe in turmoil and, as someone new to Valiant, I didn’t feel the i impact as much as l long-term Valiant fans might have. Like I said earlier, the sequence didn’t feel incomplete, but some significance was definitely lost on me. That said, I did recognize a lot of the Valiant characters depicted in the passage, and that’s probably a testament to how striking Valiant’s character design has been. Either way, Braithwaite definitely delivered the message that, if something didn’t change, everything would be going to hell in a hand basket. Also, there was a minotaur in a suit. I need to know which Valiant book that guy is in.

All in all, “Book of Death” was a lot of fun, which is what crossovers are meant to be. And while I didn’t get everything, I didn’t feel stupid or left out for doing so. Vendetti, Gilbert, and Braithwaite know how to include new readers into their story while offering a lot of rewards for those who have been with them the entire time. It really is the best kind of crossover: one that showcases the greatest a universe has to offer while offering a new status quo for its permanent residents. “Book of Death” began at a slow pace in order to catch up new readers and lay out its own consequences, the board has been set for one hell of a war. And I’m going to make sure I see every step of it.

Final Verdict: 8.1 – “The Book of Death” is a bold entry point into the Valiant Universe and, for long time fans, a crossover that seems to validate tons of long-term stories.