After a brief hiatus, this week sees the return of Kieron Gillen and Jamie McKelvie’s massive hit “The Wicked + The Divine.” Though never the types to just rest on their laurels, the team have shaken things up somewhat with this latest issue and delivered us something a bit more conceptual than we are used to. If you can believe it. Furthermore, the incredible Kevin Wada has been brought on to provide the necessary ‘lewks’ that this very special issue needs. 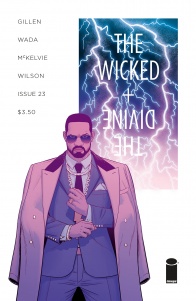 Written by Kieron Gillen
Illustrated by Kevin Wada & Jamie McKelvie
NEW STORY ARC! ‘IMPERIAL PHASE I’: Part One-Welcome to the November 2014 issue of Pantheon Monthly. Exclusive interviews with all your favorite gods. Plus! The first photographs of the Morrigan ever!

Just like many of the real life musicians that the ‘Pantheon’ have styled themselves after, Kieron Gillen and Jamie McKelvie are prone to reinvention. It seems with every new arc of “The Wicked + The Divine,” the two can’t help but change things up. We’ve seen the book shift format, tone, and even setting, yet with each new direction it has only gotten stronger. Normally, this amount of experimentation, especially in lesser hands, can destabilise a book; you’re asking a lot from your audience to stick with you if you’re going to sporadically make huge leaps. Though Gillen is very particular with the risks that he takes, they always serve to reflect some aspect of the book at large. Also, it helps that the core concept at the centre says fundamentally the same. With issue #23 we see the biggest shift the team have accomplished over the course of the title. For one time only, “The Wicked + The Divine” becomes “Pantheon Monthly,” a fictional magazine dedicated to everything godlike, styled after periodicals like Q Magazine or Slash. It fits into the universe Gillen and McKelvie have created so perfectly, stylish with just the right amount of mystery.

So the issue consists of several interviews, each with a different member of the Pantheon, including The Morrigan, Baal, and even the long deceased Lucifer. Gone are the usual panels and speech bubbles, replaced with glossy layouts and lengthy, in-depth paragraphs. This will definitely test some of the more casual fans of the book, but will certainly delight those already obsessed with these characters. Overlooking the fact that the “photographs” are just illustrations by the talented Kevin Wada, the illusion is so complete you’d be forgiven for mistaking it for a real magazine. It could very well have fallen through dimensions into our own. We have Gillen’s meticulous attention to detail to thank for this, like how each interview has apparently been written by a real life journalists Laurie Penny and Leigh Alexander. Gillen has even shifted his style of writing to fit the guise he is under. Penny’s interview of Woden is as personal and confrontational as you want it to be; Leigh Alexander interviewing The Morrigan is as poetic and ethereal as her subject and Dorian Lynskey is precise yet informal when talking with Baal. To write five complex interviews in five different, very distinct voices, is beyond impressive.

Reading through this issue, I did feel that Gillen’s intention was to deepen our understanding of these characters, rather than broaden. Even the more subtle drops of information we’re given doesn’t really teach us anything new plot wise, but rather informs us to the emotions characters like Baal and Amaterasu felt over the last arc and the motivations of characters like Woden and The Morrigan heading into the next. I guess the issue works like a primer, it does a good job bringing new readers up to speed while, in the most tentative way, whetting our appetite. If you are reading “The Wicked + The Divine” and are up to speed then you could easily skip this issue and know you haven’t missed anything important. I don’t understand why you would, this issue is far too good to jump; even without the fantastic world building and character development, where else would you get to see full page spreads of Kevin Wada’s work?

When I first heard Wada was doing interiors I was instantly excited, if not a little apprehensive. If you are like me you’re a follower of Wada’s work online, from his debut ‘X-Fashions’ to the constant demand for his work at conventions. He constantly turns out piece after piece of gorgeous work that suggests a fashion forward mind, a craftsman with watercolours. Recently his work has begun to appear on covers for the Big Two, but this is the first he has been given art duties. As much as I am a fan, I couldn’t imagine how he would adapt his style for the kind of storytelling a book like this needs. However, after learning about the premise for this issue, and then seeing it for myself, it made perfect sense why you would go to Wada. Accompanying each interview is a series of illustrations, showing each character in beautiful, high fashion outfits. Wada, as the “photographer” (though he should also be credited as stylist) has captured his subjects as accurately as Gillen captured the voices of his journalists. Lucifer’s is recognisably clad in monochrome and androgyny; Amaterasu’s clothes are young and quirky and The Morrigan is resplendent in Gothic drama. Though my favourite has to be Baal’s outfits – bold with a masculine silhouette yet manage to show off his inner depths and sensitivity. There is one image of him I want blown up and mounted on my wall. I’m not going to lie, I would have liked to have seen how Wada could have dealt with storytelling, but when the art looks this good it doesn’t seem like a priority anymore.