Once more, they return. Except when they don’t! Let us join Kieron Gillen and Stephanie Hans as we take a look at the last days of a former pantheon. How does it go? Let’s find out! 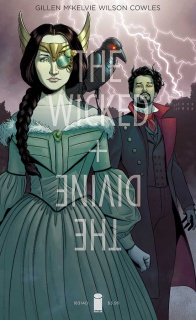 “MODERN ROMANCE” Critically-acclaimed THE WICKED + THE DIVINE goes back to the nineteenth century, to see what became of the Romantic poets one infamous night on Lake Geneva… Showcasing STEPHANIE HANS (Journey Into Mystery, Angela), this special is NOT included in the forthcoming THE WICKED + THE DIVINE, VOL. 4.

“The Wicked + The Divine” and I have had an up-and-down relationship. Never thought it was bad book. Not at all. But from what I did read, I always like what it was talking about more so than just what it was itself. It’s exploration of fandom, the good and the very bad, and the explorations of moving from fan to creator were always fascinating, as well as the explorations of death. It was always an interesting book.

“The Wicked + The Divine: 1831” takes that exploration of death up to a whole new level and I love it.

This isn’t a pantheon in the middle of their Recurrence, this is one at its very tail-end. We open to Hades’ last moments at the hands of the ever treacherous caretaker Ananke and that dour feeling just goes on and on throughout the issue. What further fascinates is that it is also interwoven with the theme of creation as we follow this Recurrence’s Inanna, Wodan, Morrigan & Lucifer. Like the Pantheon of the present, there is Gillen and Hans make their nods to and influences of the great creators of the Romantic period. Keeping in mind that I’m no expert on the period, but while some of them were more obvious (Lucifer being so Lord Byron is hurts), I must admit some of them took me a reread to realize, such as Mary Shelly, essentially the founder of modern Science Fiction, for Wodan.

Perhaps the biggest interest for me, especially in context of the overall story, is this throws into question just how much is the god and how much is the human. The members of the Pantheon we follow here all have reincarnations in the present day Pantheon, but the differences between the generations are great. The genders of the four are all flipped and while Lucifer will always be Lucifer apparently, the others not so much. Wodan, Morrigan (which, the two are married in this Recurrence) and Inanna feel very different. For one, Woden is not a total shitlord here. And, considering the basis for this incarnation of Woden, as well as the location -Villa Diodati- and its significance to the Romantic period, she is probably the most interesting character within this incarnation.

But driving back around to the concept of death, the melancholy of this issue does feel like it stems from those past their prime. In my own reading of Lucifer and Morrigan’s actions, it felt like creators trying desperately to maintain their power/fame, but driven up to the fantastic levels that WicDiv does. “We are more than our personal histories. My tome will not be bound by death so easily” and “I will be Lucifer, or nothing at all!” are said and it’s not a difficult stretch to interpret that from the stance of an out-of-touch creator.

Stephanie Hans is amazing. Yeah I know, Birds fly, Fish swim, but it doesn’t make it any less true. Her soft paintings here fit the period and the much more dour setting like this. I also have to say, while McKelvie/Wilson’s art is really good and they have done a great job, I do think the style they go for can limit the amount of fantasy and strange for such a fantasy book. Hans has no such limit. The twisting of reality due to Lucifer’s scheme is as horrifying and strangely beautiful as the act of creation itself and the costs it takes.

And while the horrifying stuff is beautiful and terrible, Hans also can bring the sexy. The members of the pantheon are alluring as they are dangerous. Graceful as they are inevitably tragic. She’s able to convey dark and depressing intimacy without grossness and it provides such a great contrast to the horrors at the end. Outside of the physical beauty of the characters, Hans does a great job of conveying the -admittedly limited- world of this time. There’s this beautiful rain-soaked nighttime landscape shot of the villa that is a full page and I want it as a print.

Clayton Cowles actually uses quite a variety of lettering in this. General dialogue balloons are almost square-like, but with enough agitation to almost simulate parchment. And Innana’s inner monologue conducted on dark blue background with cursive letters definitely gives off the elegance and the forlorn feeling attuned with not only the Innana of this age, but the age itself.

“You will be loved, You will be hated, you will be dead in two years.” That “dead in two years” part never felt so heavy as it is here. Gillen, Hans and Cowles have crafted a companion story that is as mystic as it is tragic, spread wide into the supernatural but grounded in a very harsh reality. My only regret is that this will probably the only time we spend with these versions of the Pantheon. But as Alfred Lord Tennyson -who would be coming into his own just after this Recurrence- said, “better to have loved and lost”.

Final Verdict: 8.8 – A beautiful and horrific look into the past that continued on the themes WicDiv set.