Kurtis Wiebe. Riley Rossmo. Garbage monsters, and a heroine with a really fantastic braid. If there’s a more exciting combination of elements out there, I haven’t heard of it. 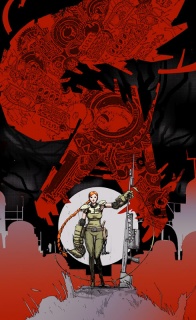 Written by a Kurtis J. Wiebe
Illustrated by Riley Rossmo

In the far future, humanity has doomed planet earth to rot and decay, covering her surface with garbage. Now, ancient spirits called the Colossals rise from the debris and attack the remaining survivors, forcing the human race to the brink of extinction. One warrior woman, Maya, sets out to find the last source of pure water to save the world before the monsters bring it all to an end.

Kurtis Wiebe and Riley Rossmo have a devout following here at Multiversity, with their last collaboration “Green Wake” really grabbing our attention before it met its untimely end. And while I’m sure many of us would be happy with more of the same — another murky world, another intimately connected series of mysteries — Wiebe and Rossmo have here crafted a tale that goes in an entirely different direction.

In a post-apocalyptic, trash-strewn desert of the far future, Calista and her pupil Maya are charged with protecting their isolated settlement. The threat that confronts them is monumental: giant monsters amalgamated from the litter that covers the planet. Maya is learning quickly, but the rapidly-unfolding series of events that constitutes this issue’s action will challenge her in ways she never imagined.

This is a spoiler-free review, so that’s all the plot you’re getting for now, but it’s the atmosphere and feel of “Debris” that are really remarkable — even though it’s looking to be a far more plot-heavy and action-based series than “Green Wake”. In the best possible way, “Debris” plays out like Xena: Warrior Princess, or any other heroic series of the mid-nineties. It’s got more than its fair share of heavy material, plotwise, but the atmosphere is light, almost matinÃ©e-ish. I have no doubt that Wiebe is going to ask some Big Questions in the series, but I suspect they’ll be carried off effortlessly, buoyed by the high energy that’s on exhibit in this first issue.

Speculation aside, the helping of story that we get in this issue is satisfying, intensified by some high stakes and kept sympathetic with an immediately compelling cast of characters. The pace is fast but each plot detail comes across lucidly, building before our eyes an entirely new world and unique set of circumstances. And Maya, our heroine, is really put through the wringer, emerging at the end of the issue as a flinty, independent personality who’s going to do her damnedest to make things right. It’s always heartening to see a strong female character in a comic — and she’s even wearing clothes! — but even without the gender factor, she’s got an arresting air and charisma to burn.

Rossmo’s messy, chaotic style has long since been his trademark, but here he simplifies his lines, drawing more attention to the composition of each panel. Without the ink spatters and splotches of pattern that textured the pages of “Green Wake” and “Proof”, the art of “Debris” has an ultra-modern feel — picture the set of Prometheus as streamlined by Apple and you’re halfway there. Owen Gieni’s colouring, meanwhile, lends the the title a unique visual signature: all blues, oranges, rich browns and sudden reds, the pages of “Debris” have a fun, inviting air.

As praise-worthy as Rossmo’s art is, however, there are a couple of visual hiccups in this issue: Maya’s hips don’t always join up with her legs as they should, and her facial expressions sometimes miss the mark, coming across as blank or stiff. Still, it’s exciting just to see Rossmo overhaul his style for the purposes of the series, and “Debris” promises many more gorgeous pages before it finishes its run.

Like Kurtis Wiebe and AluÃ­sio Santos’ “Grim Leaper”, which is also being serialized at the moment, “Debris” is a four-issue miniseries, and if you find this fact frustrating then you’re probably in good company. While “Grim Leaper” relies on a single, strong concept that suits the shorter run well, a rich science fictional word like the one that fills the pages of “Debris” would benefit from more breathing room. Which is to say, Wiebe gets across the details of this new universe with his usual economy and verve, but it’s hard not to sigh for the slowly unfolding sci-fi epic that this could easily have grown in to… regardless of whether that was ever in the cards.

All of this said, “Debris” is an exciting romp through a desperate far future. And while I suspect that the compressed storytelling will hang together best when all the issues are assembled into a trade, this title’s page-by-page beauty makes the single issue a worthy buy in itself.