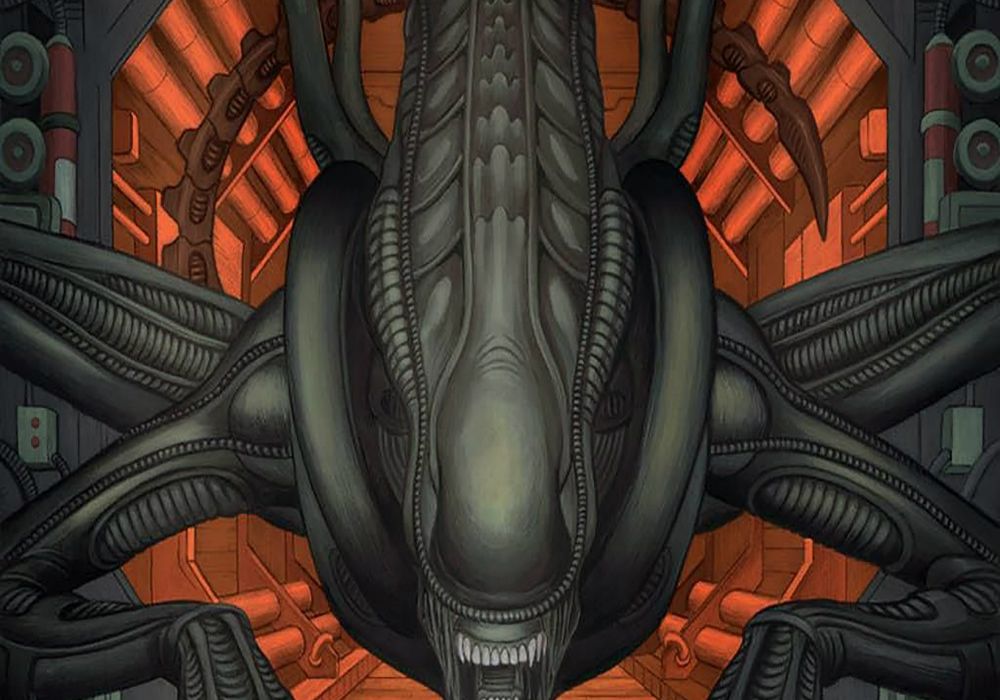 It is widely known that Alien 3 was a production nightmare that went through countless screenplays, multiple directors, and changes from page to screen. It was director David Fincher’s feature film debut and he left the project before it was completely finished, leaving the studio to ultimately release a dark, confusing, downer of a sequel to mostly disappointed audiences who had been craving a new movie. The previous two films were huge critical and box office hits so to have something that mostly didn’t work felt like a slap in the face to fans. Some previous versions of the film have been discussed over the years, some interesting takes, others forgettable, and some were even considered to be re-purposed for future installments. Now, 26 years after the film’s debut, Dark Horse Comics has begun their release of, original screenwriter, William Gibson’s vision for what happened following the events of Aliens. 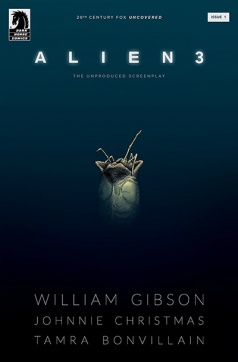 Aboard the U.S.S. Sulaco, Ellen Ripley, Corporal Dwayne Hicks, Rebecca “Newt” Jorden, and the horribly damaged android Bishop sleep in their cryo-tubes as they escape the nightmares and remains of LV-426.

Right from the start, Gibson’s version is not the Alien 3 fans know. Beyond the first panels which align somewhat to the opening credits sequence of the film, showing acid dripping onto one of the cryo-tubes on the Sulaco, we are taken on a very different journey. As the ship is traveling home, an error with the navigation system sends it into a part of space run by a corporation/government called the Union of Progressive Peoples. As the Sulaco ship moves through their sector a U.P.P. crew jumps on the chance to scavenge what they can and see what they can learn about where the ship was or what their next stop will be before it moves out of their sector. They are at odds with Weyland-Yutani, the infamous ‘Company’ that has caused every Xenomorph related issue in the film series, and are clearly up to some sort of corporate espionage to hurt or fully take down Weyland-Yutani.

The bulk of the introduction jumps back and forth showing both ruling corporate entities are dealing with the mystery surrounding the Sulaco with most characters completely in the dark as to what is really going on and few puppet masters secretly pulling strings – some just trying to get upper hand in this industrial war, and others knowing that the Xenomorphs are at the heart of everything.

Readers will notice a lack of our heroes. We know that they are safely tucked in their cryo-tubes, but for the most part we really only get a few glimpses of Bishop. We do get to see some of what happens to them initially, but it already feels like they will be just part of the overall mystery with focus actually shifting to new characters. This already feels like the sequel that audiences were promised. Focusing on the military and governing aspects, as well as some scary alien action, issue #1 points us in the right direction for a layered and intriguing plot.

It is wild that this plot or one like it did not become the filmed version as it does feel very much like a logical continuation to the plot threads began in Alien and Aliens. Tonal decisions made here ended up coming around in films like Alien: Resurrection and the first Alien vs. Predator; so clearly ideas and plot devices from this hung around 20th Century Fox for some time after being discarded.

Johnnie Christmas was the right choice to bring this adapted screenplay to the comic book medium. He brings the core of this version to life. He gives us a lot of dialogue without forcing the book to slog through text. His artwork, while more in line with traditional comic book illustrations fits the Alien universe beautifully. It works like a close relative to both Ron Cobb’s perfectly structured draftings of the Nostromo and her crew’s spacesuits, and the concept art for Aliens and Blade Runner by Syd Mead, which was highly detailed, but had this great loose sketch quality to it. Buildings and vehicles were perfected while the people in his work were a little less detailed and more-or-less just blocked out to show scale. Christmas’s work is wonderfully similar to it keeping this grounded firmly in the Alien lore. There are some fantastically creepy moments in this premiere issue without moving too far into the grotesque. We get some good facehugger action, but the most disturbing imagery involves poor Bishop and a Xenomorph egg. Mostly focusing on human interaction and drama, I am sure we there is plenty of violence and terror to come. Bonvillain’s use of color is subtle yes masterful. The way she plays with lighting and shadows works so well in this issue. For an “Alien” story, it is set in mostly well lit places like offices and various areas on more than one space station. Even ship interiors are made to me more colorful and bright. Her use of light and reflection for certain scenes is excellent with those elements and shadows dancing off each other, again, in very subtle, real-world, ways.

“William Gibson’s Alien 3” sets up a truly different take on where the Alien franchise could have gone moving forward. While the film version, especially the extended cut, is nowhere near as bad as some make it out to be, having this release should make a lot of people out there very happy. In recent years we have seen countless film franchise reboots and alternate continuities brought to the screen. This feels like the right time for this story to be released. And whether or not you are a fan of the original film, most fans will enjoy this take on the third chapter. Now we just need something to make us forget about Alien: Covenant.

Final Verdict: 8.0 – Issue one of “Alien 3” is an interesting and engaging alternate take on what could have been.