By limiting the attention to the underlying mythos and delving into classic mystical hunts tied to mundane cases, “Witchblade” #3 is finally starting to move out of its slower pacing. 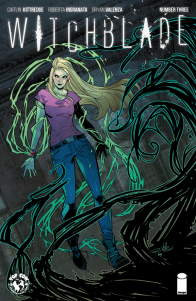 “LIFE AFTER,” Part Three
A missing-child case brings Alex and the Witchblade face to face with a powerful demon, and when Alex begins to suspect Ash isn’t telling her everything about the Artifact, she turns to her own sources for information, with devastating results.

For far too long, the main problem with the reboot/new run of “Witchblade” has been that it takes far too long to actually get into the meat of what is going on. Instead, it relies on generic supernatural weirdness without any real explanation. At long last, Caitlin Kitteridge appears to be moving past that stage of development, allowing Alex Underwood to begin to truly become the supernatural heroine of the Top Cow universe.

By adding another everyman character, Kitteridge provides a far better focus through which to introduce how exactly the world of the Artifacts (if that is what this will become again) works . . . or at least begin down that road. With witchcraft ranging from hex marks to full possession, Kitteridge makes up for lost time by diving deep into the workings of the antagonistic magic without necessarily revealing much more about the Witchblade itself.

In fact, the development of the seeming antagonist of the first arc comes across as more disturbing because there is information only on how the villains work. There is no real guideline in place for the new workings of the Witchblade itself in this new continuity, so readers are left wondering what it can or cannot do. On the other hand, events like apparent hallucinations and supernaturally induced near-psychotic breaks give just enough information on the diabolic entity facing Alex to hint at what could be a solution, but not enough to secure it from feelings of extreme discomfort. Kitteridge’s tendency to impose sudden supernatural influence at all of the worst times further enhances the feelings of sadness along with overall surprise and apprehension in general for readers.

That is not to say Kitteridge is all doom and gloom either. The interactions with Majil provide the aforementioned everyman attitude, despite his information on the occult. His mixture of a connection to the supernatural and a tendency to stay away from it personally leads to some humorous interactions which give audiences a surrogate to latch on to in a way that Ash, having a direct connection to the Witchblade’s mythos, can’t be.

Roberta Ingranata brings a mixture of realistic facial expressions and otherworldly visualization of the supernatural to “Witchblade,” a combination that helps make this modernized take on the franchise.

Whereas Alex and her fellow humans are portrayed rather realistically, with shading emphasizing the shadows around them, the shadow itself gives another side altogether. In particular, Alex’s own shadow writhes and undulates, showcasing the Witchblade’s power within her on the dark nights.

Facial expressions are key to this issue, and Ingranata does a great job of showing Alex’s mindset as well as that of Perdida Duncan. From shrunken-pupil shock to open-mouthed horror to curiosity, determination or mere annoyance, there are a wide variety of emotions on display through facial dialogue alone, even before the internal monologues.

In an odd way, the bright lights of the Afghan sun and the smiles around the scene make an actual, literal warzone become one of the calmest, most reassuring areas of the entire issue, on account of limiting the aforementioned shadows and thereby allowing readers to feel more comfortable that what they are seeing is something to which they are more accustomed in reality. Of course, that very sense of security is why such a feeling is so easily torn away, as Ingranata’s use of silhouetted violence helps to enhance the feelings of distress, no more apparent than when the 2012 flashback is torn to shreds as a recurring nightmare by that very device.

The way in which the supernatural is shown is a definite highlight of the issue’s artwork. Ingranata uses eldritch tendrils and heavy doses of shadow to disorient readers, a far cry from blasts of light or fire more customary of first-attempt magic. By putting most of the fight with a mirror projection in a single panel, the confusion mounts even higher, allowing for the resolution to come as far more of a surprise by making the reader as disoriented as Alex herself.

The way in which the witch herself is portrayed is the scariest part of Ingranata’s artwork by far. From the juxtaposition of near-identical panels to make readers have to figure out what is wrong, to the shadowed eyes of the possessed, to the shadows all around the area when it fully manifests in the victim, everything about this villain positively oozes evil before it even has to say a single word. The first look, in which Ingranata uses a blurred vision coupled with empty, black eye sockets, is shocking enough to make Alex’s subsequent shrunken-pupil appearance extremely appropriate.

Bryan Valenza makes very good use of color throughout the issue. The green-to-black gradient on the Witchblade tendrils emphasizes its otherworldly nature beyond even the tendril look itself, with the violet shades of the witch’s influence casting a different kind of spell over the entire situation that is no less bizarre. The splashes of red in the more violent scenes such as Alex’s nightmare emphasize the extreme, sudden violence of her world.

With the sped up pacing and continued great art, “Witchblade” #3 proves that this is definitely a series to watch.