Later this month a new miniseries set in Mignola’s Hellboy Universe begins: “Witchfinder: City of the Dead.” Join us for a spoiler-free advance review of the first issue. 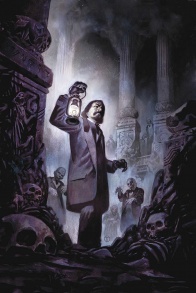 Sir Edward Grey, occult adviser to the queen, confronts flesh-eating corpses and discovers a temple beneath London. The mystery that compels him the most is what the sinister Heliopic Brotherhood of Ra wants with it—and from him.

Mark Tweedale: I must confess, I always get very excited about a new “Witchfinder” story. It strikes me as such a fertile ground for stories, and I feel like what’s been presented so far hardly scrapes the surface. Each new story is an opportunity to further explore Sir Edward’s world. Does this story deliver? Boy, does it ever!

This story returns to London for the first time since 2009’s “In the Service of Angels,” so instead of being thrust into a new location with new characters, instead we’re exploring a familiar location and characters. “City of the Dead” builds on what’s already been established and shows new aspects of Sir Edward’s life in London. In particular, we get a much stronger sense of what Sir Edward’s day to day life is like, and the people in his life. Sir Edward’s colleagues at the Saint John of the Cross Police Hospital are given bigger roles. Before they were practically cameo parts, now they’re supporting roles. This takes the burden of carrying the whole story off of Sir Edward’s shoulders and spreads it around a bit more. Much of the humor in this issue comes from his interactions with the supporting cast, which adds to the fun of the story, but also serves to cement the identities of the supporting cast.

This was done so well that Bailey, Sir Edward’s butler, a character only in the book for a few panels, was defined in such a succinct and and compelling way that already I want to see more of him.

Mike Romeo: I’m always excited for a new “Witchfinder” series, too, and this issue feels like a good start. I’ll admit that writer Chris Roberson has been hit or miss with me when it comes to his work with Mignola, so I wasn’t entirely sure what to expect from this. That said, I think this might be the strongest single issue we’ve seen from him yet.

I feel like what Roberson’s doing here is a little different than what we’ve seen from the title so far. You touched on it when mentioning the expanded cast, but I think it shows the most in his handling of Sir Edward Grey. There’s a punchiness to his dialogue that goes a little beyond his usual wryness. It reads like Roberson has taken Grey’s usual English gentleman-ness and added a bit more arrogance to the mix. It’s something that’s always been there, but feels a little more teased out than before, and I really think it works. I mean, the guy’s not only an expert in his field, he’s also employed by the queen. I’d say that warrants a bit of cockiness.

There are also a couple of points where Grey himself seems aware that there’s a page turn coming and marks the occasion with a snappy bit of dialogue. The last panel in the morgue scene is a good example, I think. Roberson’s adding some flair, and it makes the writing feel more confident than his last few Mignolaverse projects.

Mark: Sir Edward is actually Roberson’s favorite Mignola character, so I think there’s more than just confidence at work, but joy as well. He knows what he likes about the character and he knows how to showcase him.

I’m curious what you thought of the art in this series. Ben Stenbeck, who did the first “Witchfinder” miniseries back in 2009 has returned, but his approach has changed. He’s using digital ink washes now. That and Michelle Madsen is doing the colors on this book instead of Dave Stewart. The thing is, after Tyler Crook’s ink wash approach to the previous miniseries, this new look feels strangely like continuity rather than a departure, and it does wonders for London. The city looks grimy and gray in the best possible way.

Plus it’s always exciting to see an artist push themself in a new direction. In Stenbeck’s case, it really shows in the more atmospheric locations like the underground ruins and the graveyard.

Mike: I love Stenbeck’s art! I was really struck by his washes in this issue, and the sort of softness in his pages overall. I got to know his work pretty well over his “Baltimore” stint, when his work was far more contrasty. He had a real Mignola-esque way of casting light and shadow, right? Now he seems to be finessing his approach a bit. It’s still clearly Stenbeck, but he’s working in gradations around his shadows. His backgrounds seem to lean on washes now too, as he uses them to separate backgrounds from inked foregrounds. I find it all to be really impressive.

I actually didn’t realize that this wasn’t Stewart’s colors until you mentioned it. Madsen did a hell of a job on these pages. Her handling of color over Stenbeck’s washes is really nicely done, the sort of job where you can’t see where one artist left off and the other began. Her palettes really hammer home the environment that I think Stenbeck was going for.

And I agree on the visual-continuity point. Stenbeck is using washes in a way that’s different from Crook, but still evokes the same sort of feel. Like there’s a damp chill around Edward Grey at all times.

Mark: Oh, yeah, a ‘damp chill’ is exactly what it feels like. Plus he’s really grown in his character work too, finding interesting ways to express a character through a pose or their costume.

I don’t suppose there’s much more I can say without spoiling the book, but I did want to mention Julián Totino Tedesco’s cover. He did the beautifully haunting covers for The Mysteries of Unland, so I’m very happy to see him back on this miniseries. He certainly summons the right mood for the story.

Was there anything else you wanted to add before we pin a score on this one?

Mike: No, I think we covered a lot of bases. This was a really excellent first issue from top to bottom. Roberson surprised me in the best possible way and the art team was in great form. It’ll be an 8 from me.

Mark: I’m giving it an 8.5. I loved the character work and the atmosphere generated by the art. I finished the issue with a big grin on my face. We didn’t talk much about the mystery at the core of this story due to the obvious spoilery nature of it, but it’s certain got me hooked.

On another note, I liked catching elements that appear to indicate long-term plans beyond this miniseries. I’ve got my fingers tightly crossed and they’re starting to turn blue.

Final verdict: 8.25. It’s good to have Sir Edward back again.