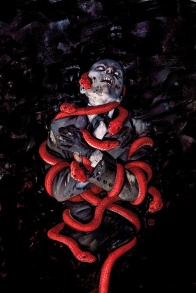 Sir Edward Grey travels beneath London to the lair of a longtime enemy who needs his help fighting an even greater threat.

Mark Tweedale: I’m going to get straight to point: I loved this issue. “Witchfinder” has always been a favorite of mine, but I felt like it was hampered by being restricted to just Sir Edward. This arc, however, has gone to great lengths to establish its supporting cast. Before this miniseries, “Witchfinder” was narrowly defined, whereas now I feel like its range has really opened up.

Mike Romeo: I fully agree. Not only are connections that were previously alluded to being made, but there’s also a bit of surprise name-checking going on. It’s like the narrative is feeding off both the direct and indirect ties that bind Sir Edward to the larger world. It’s like Roberson is buttressing the story he wants to tell with slabs of narrative others have left behind. I find it to be a clever and satisfying way to tell a story.

As was the case last time, I know that there’s gotta be a lot you want to get to, so where do we start?

Mark: Let’s begin with preview pages we showed off earlier this week. Last issue made it pretty clear this was the Giurescu storyline originally mentioned in “Hellboy: Wake the Devil,” while still remaining a bit coy about it until the last few pages.

This issue is certainly not coy. It revels in the Giurescu stuff. The scene with Giurescu striking a deal with King George is very reminiscent of when Giurescu met Hitler in “B.P.R.D.: 1946” (although, of course, this scene is set about a hundred and saeventy years earlier). Stenbeck pushed this moment perfectly, echoing the scene in “1946” without being beholden to it.

And that, I think, is the ethos of this whole story. Let’s face it, this story is on rails. This is history, so we know how it’s going to end. On paper, this story could very well come off as mechanical, and yet it never does.

Mike: For sure, but at this point my feeling is that this is more about the journey than the destination. We know the broad strokes, but finding out what it was actually like in the moment is where the intrigue is going to come from.

Stenbeck’s art is as fantastic as you’d expect, particularly when it comes to the range of expression he’s able to imbue his characters with. When it comes to the way Sir Edward carries and presents himself, Stenbeck is the perfect compliment for the way Roberson scripts the character. He just has so little patience for most everyone around him, and the art makes that crystal clear.

One aspect of the art I have a little bit of an issue with is the color. The last two installments of this series has earned high praise from us in this department, but the third issue left me a little cold. I’m think specifically to the scene that takes place in the underground temple. Here everything gets almost monochromatic, and some of the darker panels get a little muddied. I hope I’m not sounding overly harsh in my criticism, but I found it to be a real shortcoming.

Mark: I’ve found the monochromatic look present throughout—in some scenes more than others—though for me I thought of it as a way of giving the comic the feeling of being sepia toned without actually being sepia toned. But if I’m honest, this is one of those moments when I miss Dave Stewart’s work. I feel terrible saying that, but he’s been on these titles for forever, and it’s impossible not to notice his absence.

The biggest highlight for me was Miss Goad. She’s been a part of the background for such a long time, and it was very satisfying to see her step up where her male counterparts stepped back. And I love that as soon as she’s given the opportunity to show what she’s got, the curtain is pulled back and we get to see how fascinated by the supernatural she is. She has a real passion for it.

And in the middle of all of that, Sir Edward still manages to point out an unkindness of ravens is the correct way to refer to a flock of ravens.

Mike: I feel like there were some nice little moments like that through the issue, and Manley was at the center of at least two of them. I love that Stenbeck and Madsen have taken to treating him cartoonishly, with a little tornado over his head of a reddened face to show his anger.

Last time around we were both feeling like the series was a little overstuffed, and I think that this issue gave readers some much needed breathing room. Sure, there were smaller moments like Miss Goad stepping into the scene, or the mention of Gostav Strobl, but by and large this installment was spent working through what we’ve already got on our plate.

Mark: And yet surprisingly, it still found room to squeeze in Mohlomi’s first meeting with Sir Edward (outside of a dream).

Mike: Yeah, and in some fancy English duds and everything!

I’m ready to get into scoring if you are.

Mark: Let’s do this. I’m giving this one a solid 8. I’m clicking with the characters more and more with each issue, and that’s where the real fun lies for me.

Final verdict: 7.5. A little relaxing of the pace gives this issue room to breathe and grow its characters, though we couldn’t help but miss Dave Stewart on this issue.