Roberson’s “Witchfinder” debut comes to an end, demonstrating an understanding of Sir Edward’s world and his character in a way we haven’t seen before. 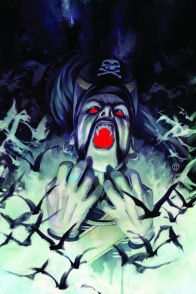 The Witchfinder returns to the secret chambers of London’s underground to stop the powerful vampire Vladimir Giurescu before he creates an empire of the risen dead.

Mark Tweedale: Well, after reading that issue, I’m riding on a major high. That was so much fun! And this review is full of so many spoilers, so beware.

Given our conversation in our review for the previous issue, I feel kind of stupid for not seeing this coming, and yet really glad I didn’t, because I enjoyed the hell out of it. It didn’t click with me what Sir Edward’s plan was, and yet it totally makes sense. Sir Edward is ultimately a pragmatist and he’ll do what needs to be done even if he doesn’t like it. Even still, the idea that he’ll work with the Heliopic Brotherhood of Ra was something I simply could not fathom until I saw it on the page. We’ve spent a lot of our past reviews of this miniseries talking about character growth, and for me this was a major high note to wrap everything up with.

This was an ending that revealed a major aspect of his character in a way that was very satisfying.

Mike Romeo: I didn’t see his alignment with the Brotherhood coming, either, but once it was revealed it made perfect sense. I sort of chalk it up to how Roberson painted the character up to the end of last issue: increasingly isolated and erratic. I thought the visuals in that opening fight scene were great, but the pacing felt awfully familiar, didn’t it? To my mind the battle had the same pacing issues as a recent issue of “Rise of the Black Flame,” as Roberson injects chunks of dialog every so often that make the fight seem over, when really it isn’t. It seems like he really wants to write these big battle scenes, but keeps tripping himself up.

Mark: Yes, it makes the action sequence a stop and start affair. It also makes Sir Edward and Giurescu seem apart from the action, despite being in the thick of it. It’s not just that their talking, but they’re quite loquacious for people trying to talk over the noise of battle. I felt like the exchanges between them needed to be short punctuations on an action. I found myself wondering when they had time to draw breath.

I must admit though, I was totally geeking out about the vampires fighting the Heliopic Brotherhood. And even though it’s a brutal fight, it’s really a slaughter for vampires—The Brotherhood knows how to fight vampires and it shows. It’s great, because it enhances all the 1940s stuff with the vampires. It makes you understand the division between them. Some feel rage for the way he so recklessly endangered their kind, while others felt pride for what he attempted.

But by far the best part was when Giurescu went to explain the vampire to sleep for centuries until humankind had forgotten them… only to have Sir Edward Grey go, ‘Oh, yeah, I already figured that out and killed them all.’ It’s just the sort of thing that makes Sir Edward distinct character in this universe, and it was great to have that moment where he pulls the rug out from under Giurescu’s feet so to speak.

Mike: Yeah, seeing that battle take place was fantastic, and Ben Stenbeck should take a lot of the credit for that. That two page spread was incredible, both in artistry and the fact that it even happened. We don’t see those too often in the Mignola books, so when it’s pulled out like this its effect is even greater.

I was really impressed by how Stenbeck was able to adhere to the style of the technology used by the Brotherhood without ever seeming to clone what’s come before him. He’s able to stay on-model with all of the spears, hoses and coiled instruments without ever feeling like he’s just copying what Mignola’s already laid down.

Mark: Well, he’s already had quite a bit of experience with it—he drew quite a few in “Witchfinder: In the Service of Angels.” This is one of the things that great about having a seasoned “Witchfinder” artist on the title. Ben Stenbeck knows this world and it shows.

The other part of this story I wanted to mention was the way it wrapped things up. This story ends, but there’s the promise of more this time. Mohlomi showing up was only a little aspect of this story that seems to be a thread that’ll continue on through numerous books… I guess kind of like Memnan Saa in “B.P.R.D. Plague of Frogs,” but not evil. But it’s more than that. As we discussed, Sir Edward Grey changed through the course of this story, the final scene with Mohlomi also promises further change.

In short, I’m eager for the next “Witchfinder” miniseries. Even more than usual.

Mike: That’s a good point, and something that I felt a little of at the end, too. The way this wrapped up felt more like a precursor than a conclusion in some ways, which is really exciting.

I know we had some criticism of the color a little earlier in the series, but I feel like this issue was really well done, particularly once the fight scene was under way. I liked how Madsen played the cool blue electricity against the earthy, underground colors. Seeing the nearly monochromatic palettes clashing up against one another not only created a depth in the scene, but I think played to her strengths as an artist as well. She seems to lean towards a monochromatic approach to this series, and what I saw in this issue was an interesting way to play within those parameters.

Mark: Yeah, I definitely agree. There was a nice bit at the end too when Mohlomi showed up, using greens to show when Sir Edward had slipped into his sleeping vision. It nicely punctuated the moment when he woke up and the colors switched immediately, like the lights had been switched.

Oh, and I loved the way this ended in that very Mignola-ery way, with talking animals speaking of doom to come. That was definitely the right way to wrap it up.

Mike: Hey that sounds like a segue! Want to put a score to this one?

Mark: I’m giving this an 8. Whatever qualms I had with the dialog in the fight sequence was offset by my enjoyment of seeing Sir Edward reveal he was a step on Giurescu. Roberson and Stenbeck understand this character, and I couldn’t help but enjoy the cocktail of their work together.

Mike: I’m going to take this one as a whole and score it a 7. Aforementioned dialog aside, this was a solid issue from a solid run. It left me with the feeling that there’s some great stuff to come.

Final verdict: 7.5. A solid ending to this miniseries with great promise for future stories.

(And sorry this one is late!)