After a two year absence, “Witchfinder” is back with a new five-issue miniseries drawn by a new artist. 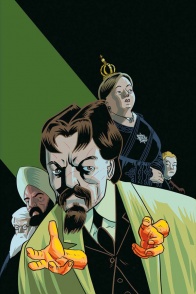 A series of occult events mystifies the man known as the Witchfinder, but even more surprising is the revelation that he is not alone in exploring the paranormal in London. When a personal invitation arrives from the palace, Sir Edward Grey is pulled even deeper into underground supernatural exploration alongside new allies in the race to stop a mad scientist from destroying London in his pursuit of mystical power.

Back when Dark Horse was teasing this miniseries on Twitter, I remember looking at one of the images and going, “Oh, that’s probably “Witchfinder,”” but then I looked a little more closely and saw some stylistic departures and thought, “Ah, I guess not.”

‘The Gates of Heaven’ has a very different look from the stories before it. Especially after Tyler Crook and Ben Stenbeck did ink washes and tone on their arcs, D’Israeli’s style immediately brings a different energy to the title. And letterer Clem Robins has changed his lettering style for “Witchfinder” too (which is what threw me in Dark Horse’s Twitter teasers).

The impetus behind these changes interests me. In its first three books “Witchfinder” went from the streets of London, to the Wild West, and to the foggy swamps of Unland. All were markedly different in terms of setting and yet familiar in terms of structure: Sir Edward is on the case and all alone, he gains allies throughout his investigations, but by the end he is alone again. “Witchfinder” rested heavily on Sir Edward’s shoulders alone.

Don’t get me wrong, I like Sir Edward, but he’s almost always more interesting when he has another character to play off of. This is where ‘City of the Dead’ was different. For the first time Sir Edward’s coworkers at the Saint John of the Cross Police Hospital went beyond just giving him a briefing. Miss Goad even went on to play a major part in the investigation. Best of all, at the end of the story they were all still alive, able to participate in future stories. This is what I find to be the biggest change in the series since Chris Roberson came aboard, and it’s one I’ve thoroughly enjoyed so far. Given the way things play out in this first issue, it seems he’s putting even more characters into play that’ll likely play a role in future miniseries too.

The world of “Witchfinder” is getting bigger, and it is evident on every page of ‘The Gates of Heaven’ #1. The dramatic shift in the series’ art style calls further attention to this, making readers look anew at this world. I’m not familiar with D’Israeli’s prior works, but I’m very much enjoying what he’s doing here with colorist Michelle Madson. Speaking of Madson, like Clem Robins, she’s changed her work considerably to better fit with D’Israeli’s work. While coloring Ben Stenbeck for ‘City of the Dead,’ her colors were often muted or even muddy, here her work is saturated. And it’s a good fit too, especially in panels dominated by black shadows or panels almost entirely defined by color. 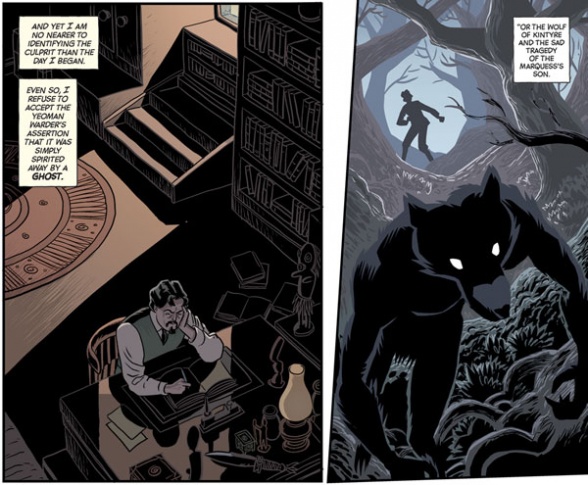 That panel on the right was my favorite from the issue. It evokes a whole story with such immediacy.

A running theme since the beginning of “Witchfinder,” even outright stated in ‘Lost and Gone Forever,’ is how rigid Sir Edward is in the face of the many supernatural mysteries he encounters. Ultimately we know his fate already, that he becomes a sorcerer of sorts in the afterlife, so it’s always interesting to see this element rear its head and wear down Sir Edward’s resistance a little more. That’s certainly at play here and often Sir Edward assumes he knows more than any others in the room… which is a nice thing to see presented in the first issue of an arc, because it almost certainly means he’s in for a bit of a shake up.

That said, the primary mystery at this point is rather predictable—a mystery for Sir Edward, but not so much for the reader (though to be fair, it was hardly structured as a real mystery, but rather some intrigue to set things in motion). The surprises in this book come from the way the creative team expands the world of “Witchfinder.” I certainly like the little mentions of the many adventures Sir Edward has had that we haven’t seen; in between each arc, he’s clearly very busy. And for readers that have been reading other Hellboy Universe titles, there are some nice connections here. But the book has been away for two years, so there is a certain amount of energy devoted to bringing the reader back into this world again and refamiliarizing us with its returning characters—Roberson managed to fit them all in, even while introducing a slew of new ones. With that out of the way, issue #2 should be able to hit the ground running.

Final verdict: 7.5 – A strong opening to a new “Witchfinder” tale. D’Israeli, Madsen, and Robins steal the show with their striking new approach to the art.