Sir Edward and company prove their mettle against the “dragon” from the last issue in a sequence that shows both the strengths and weaknesses of “Witchfinder: The Gates of Heaven.” Read on for our spoiler-filled review. 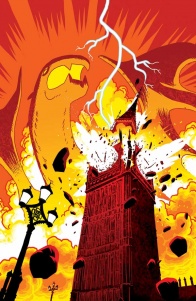 A terrible loss draws the Witchfinder ever deeper into the hunt for the source of the supernatural terror gripping London. Recruiting new allies to his cause, Grey’s search brings him to the very doorstep of those responsible, but is he in time to stop their horrific scheme from engulfing the entire city in darkness?

Mark Tweedale: I don’t know about you, Mike, but I’m getting pretty worn down by giant mutated animals as monsters in these comics. Granted, this is the first time we’ve had one show up in “Witchfinder,” but we’ve been seeing them a lot in “Hellboy and the B.P.R.D.” thanks to the Enkeladite plotline. It worked fine in ‘Beyond the Fences,’ because it was new. But they keep on popping up, and I’m starting to feel fatigued by them—not the plot surrounding them, but the creatures themselves, because the battles all start to feel the same after a while. I’m actually starting to dread whenever a mutated animal monster shows up. Considering the B.P.R.D. is still fighting them in 1964 (see “The Visitor: How & Why He Stayed”), I need more compelling battles. “Witchfinder” navigates it better than “Hellboy and the B.P.R.D.” has of late—once you take Hellboy out of the equation, the tactics of combat at least change—but I certainly would’ve enjoyed this issue’s opening sequence much more if it had been new. As it is, the beats here are very familiar when compared to the turtle fight in “Occult Intelligence,” with Sir Edward getting his shirt torn up like Hellboy gets his boots torn up, and Simon effectively playing Woodrow’s role.

Mike Romeo: I’m going to blame Guy Davis for spoiling the shit out of us with his insane monster designs.

In all seriousness, though, I can’t say you’re wrong. While I hadn’t made the connection myself, maybe this is becoming another one of Roberson’s trappings? As he drifts away from over dialoguing he’s moved towards over mutating, I suppose. If I had to say, I think that maybe I hadn’t made the connection because “Hellboy and the B.P.R.D.” has left me cold, therefore it doesn’t really occupy much of my brain space.

Or maybe it’s D’Israeli crushing every one of these pages.

I’ve been a fan of D’Israeili’s art for a while now, ever since he and Rob Williams teamed up on “Low Life” over at 2000 AD. I find his art to be startlingly idiosyncratic, and in all the best ways. What I’ve always found interesting about his work is how it can be so unreliant on the line. When we think of comics and cartooning, we generally think of black holding lines that defines figures and shapes. What we see in D’Israeli’s art is something different. He’s got a bold and immediately recognizable line style, but he has no qualms about jettisoning it wherever he needs to. 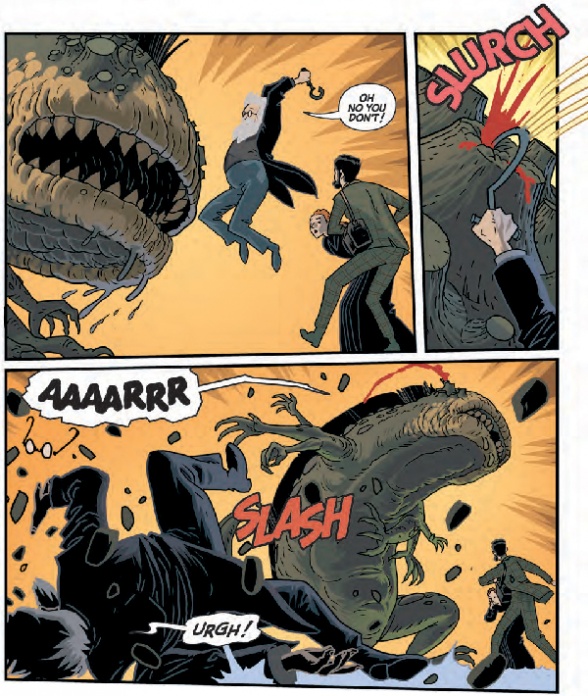 Looking at the panels above we can see what I’m talking about. In the professor’s beard and places where there is meant to be a strong highlight we see line give way to shape and color. It’s a neat trick, and one that D’Israeli uses really well.

I’m very curious about where his art ends and Michelle Madsen’s begins. D’Israeli’s art relies heavily on color, color holds, and tone. I had the pleasure of hosting a live draw with him last year, and watching him work really showed me how intertwined all aspects of the art are when he plans a page. I can again call to the panels above and point out the greyish blue holding lines around the Professor’s jacket, but what I really want to do is turn the page and talk about blood. The way it splatters and streaks across the pavement is a perfect example of a who-did-what situation. These two clearly make a good team.

Also, and this is of no consequence, but did you see the way the glasses are laying on the sidewalk and that long shadow they cast? It’s such a simple thing, but I find it pretty brilliant.

Mark: Yeah, I did. And like you, I’m curious about the line between D’Israeli and Madsen, especially in the way they create volume. With a heavily stylized approach like this, I find it’s very easy for a scene to read as flat, and yet it doesn’t. These two work seamlessly together to the point that I can only pick a few instances where I’m pretty sure I’m seeing Madsen pushing this depth aspect—like in the first issue in the scene where Sir Edward meets with Queen Victoria, and Madsen uses the shafts of light from the windows to wash out portions of D’Israeli’s inks. I get the feeling these two were in regular conversation throughout the process for the art to function at this level.

I hope the trade sketchbook section goes into the coloring process, and not just because the line between the two artists is so blurry, but because there’s an evolution throughout the series. We only see a glimpse of it in the last few pages, but I think it’s fair to say #5 is going to push D’Israeli and Madsen to a whole other place.

Mike: Here’s hoping! And beyond next issue, I’d love to see these two paired up again. Either in this universe or on the other side of the pond.

OK, let’s dive into the plot for a bit. I’m curious what you think is going on with Aldous Sinclair. It was pretty obvious, especially with that iconic Anum’s fork apparatus in issue #1, that he’d been stealing bits for a device that tunes into Vril (the sacred flame). But given all the horrors that he’s causing, I think he’s screwed up along the way and instead he’s tuning into Shakti (black flame). Madsen certainly seems to be hinting at that with all the blues she’s been using, especially near the end of the issue.

Mike: Oh man, that’s a good observation on the color front. I had never really considered the Black Flame possibility, though. I’m not up on the lineage, but you’re probably right, even if we just consider Roberson’s fondness of the character.

Mark: I’m referring more to the black flame element than the character the Black Flame. You bring up an interesting point though. We’ve no real reason to suspect Raimund Diestel and Landis Pope are the only people that’ve become the Black Flame—there could be a whole lineage of them.

Mike: You’re totally right about the Vril stuff, too. I sort of get the impression that he’s feeling around in the dark and causing more problems than he should. Sort of like how doctors didn’t always know that they should wash their hands before surgery. Sometimes it worked out ok, but others they only caused problems that, in hindsight, could easily have been avoided.

Mark: “Feeling around in the dark” is certainly accurate. I get the feeling these portals he’s creating aren’t simply “a go in one side and come out at your destination” kind of deal. It seems like there’s an intermediate location, seemingly connected with the Ogdru Jahad. 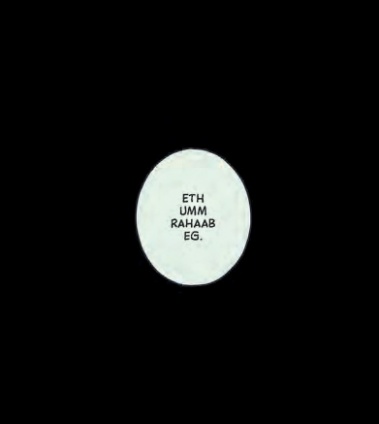 How’re you finding the team of paranormal investigators Sir Edward’s been assembling? I found this issue was especially good at shaking up Simon and Honora. Especially, Honora actually. She can become quite fierce when pushed, especially after the death of Professor Pritchard.

Mike: And that fierceness teed up D’Israeli for a great bit of visual humor.

I like the idea of him falling in with a team of people, if only for the fact that it gives him more to lose down the line. Plus, maybe this can prove to be something that one Bruttenholm to the next, in terms of relying on support when you’re sniffing around in the paranormal.

Mark: Sir Edward needs a bit of friction to make him a more rounded person. He can be quite a jerk at times. I enjoy the contrast between him in the 1880s and how I know him in “Hellboy in Hell,” where he’s much more aware of the thoughts and feelings of others. Honora feels like another character that’ll open the scope of his awareness a bit.

Given the way things were left, I’m guessing next issue we’ll see Sir Edward and co. crack out the Foundry’s airship. Should be a hell of a final issue. I can’t wait to see D’Israeli tackle it. (I just like the way he draws clouds, and the idea of taking the story up into them makes me very happy.)

Mike: He draws a mean airship, too! If you haven’t read “Scarlet Traces” yet I cannot recommend it enough. There are a lot of visual parallels between that series and this, plus his collaborator Ian Edginton can really spin a yarn.

So whatcha say, ready to wrap this one up?

Mark: Yeah, it’s a 7.5 from me. While the monster fight at the beginning was overly familiar, it was still a great bit of action on it’s own. Roberson’s a natural fit for writing Sir Edward, and that shows especially in his character work throughout the issue.

Mike: The imagery alone makes this a hell of a series, so weaving in more of Ed Grey’s story is the icing on the cake. Let’s say 7.5 from me too.

Final verdict: 7.5 – D’Israeli and Madsen craft yet another visually striking issue of “Witchfinder: The Gates of Heaven.”