Even though I was warned, the dad genes in me were seriously hurting in the first 20 or so pages of this story. 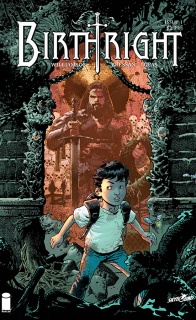 For the Rhodes family, losing their son was the most devastating thing that could’ve ever occurred…but it couldn’t prepare them for what happened when he returned. Skybound’s newest original series turns fantasy into reality in this EXTRA-SIZED FIRST ISSUE for just $2.99, by creator/writer JOSH WILLIAMSON (GHOSTED, NAILBITER) and artist ANDREI BRESSAN.

The story is a simple one to describe: a young boy goes missing, tearing his family apart in the process, until one day he returns, decades older, claiming to have been a warrior in a world of dragons and sorcery. The story, though not perfectly bisected, more or less splits the difference between heartbreaking family tale and swashbuckling adventure comic. The second half is reminiscent, tone-wise, of “Skullkickers,” with a world that echoes the most lived in of Dungeons and Dragons campaigns, which balances out the utter human torment we feel from the first half.

To be able to properly describe just how heartbreaking the first half of this book is won’t be easy because, on the surface, it sounds like a bunch of other stories you’ve seen before – child goes missing, causing parents to split up, one gets accused of the crime, remaining sibling takes on the weight of the entire family, etc. And yet, nothing in this book feels the slightest bit predictable or stale.

A huge part of the success must be handed to Bressan, an artist who has been one of the more unique and non-house-style-appropriating fill-in artists that DC has used thus far in the New 52. When the book starts, he draws the Rhodes family as four exceptionally good looking people, but as soon as page 3 hits, he is able to slowly and methodically take each character down to a point where they no longer look like characters in a comic, but rather the sad, broken people you see talk on the news about their missing kid, or the weeping families at funerals. The level of realism that Bressan brings to book is astonishing.

Until, of course, that realism is unceremoniously chucked out the window, at which point the tonal shift is so strong, you’d be forgiven for assuming that a different artist drew the second half of the book. Bressan’s subtlety with a grieving woman is replaced by flying children, axe-wielding Ork-like monsters, and flying creatures. When the book shifts to Terrenos (the non-Earth where Mikey goes), the focus shifts from Mikey’s family – who were the centerpieces of the story – to Mikey himself, and we finally get a good handle on who this missing child is. Because the first half’s main character is grief, the Mikey who shows up with the beard and the armor is just a foreign to the reader as the little boy who got lost in the woods.

That might sound like a knock, but it isn’t meant that way in the slightest – Williamson has crafted a story that is about the emotions we all experience in our very real lives and, in an odd way, removed the burden of characterization from the experience. In most cases, the entire first issue would be there to establish how Mikey is the most special kid to ever walk the Earth – Gandhi’s values with the looks of One Direction and the talent of Michael Jordan. His parents would tell tales of the day he aced his math test, helped his little brother build a treehouse, and hit the game winner jump shot that gave the local kid with cancer have the courage to keep fighting. Here, Mikey appears in 3 panels, only one that shows his face, before he vanishes.

All of this makes the tonal shift to Terrenos all the more jarring and exceptional, especially because it doesn’t happen in a linear fashion. If the book showed Mikey running for the ball, and then all of a sudden, he’s face to face with a dragon, that would be one thing. But, because the reader is forced to live in the isolation of sadness for half the book before Terrenos is even hinted at, the reveal is all the more epic. It is a really lame comparison to call the effect Wizard of Oz-esque, but that is how strong the shift really is – the Kansas of heartbreak to the Oz to a role-playing game.

Why this book is exciting, however, is the possibility of going further into each world’s reality, without giving over to either. Sure, there’s a 100 issue series of Mikey’s adventures somewhere in the creative ether, and there is a heartbreaking series about loss and re-accepting a loved one after so much has changed as well. But neither of those series can be as fulfilling as this one, where the two worlds are forced to be mirror images of each other.

But one thing is at the center of both places: Mikey. Mikey is being scoured for on Earth, and prophesied on Terrenos. Something is special enough about this boy that he is the focus of two completely separate types of worlds. And I’m excited to find out why.

Final Verdict: 9.2 – A story that works on just about every level you could hope one to work on.