Every few months, it seems that we are bombarded with announcements of comics “changing everything;” from cross-overs to event books, to reboots, to whatever, companies are always trying to tell you that what is happening right now is the most important thing that has ever happened in all of comics.

DC is continuing that trend by bucking it into submission. “Convergence,” a celebration/exploration of ‘dead’ worlds in the DCU, claims importance by featuring past achievements of import. Does this strategy work, or does it feel like more bogus hype? Find out in our spoiler-free review below. 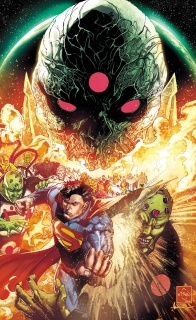 Where do worlds go when they die?

The Earthquakes felt round the Multiverse, Superman’s lost days after “Doomed,” the World’s End – all these points will converge as the history of the DCU is spun from a new perspective, the perspective of a mad god and his arrogant child. The biggest story in DC history ties into literally every DC story ever told – and it all begins here.

Kingdom Come, Red Son, Wild West Justice League, Captain Carrot and the Zoo Crew – all the worlds you remember can still be found on Telos. Everything matters. Every story matters.

Don’t miss the start of DC’s April/May 2015 event with this special issue!

Let’s get this out of the way first: this is not really the beginning of “Convergence,” despite the title and #0 numeration on the cover. Sure, one could argue that a #0 issue is always a prelude, an unnecessary set up for the event to follow. But this, truly, is not the start of the event. Everything contained in this issue can be found elsewhere – not literally, mind you – either in interviews leading up to the event, or in previous comics, or just in the space of your brain that connects disparate panels, allowing sequential art to imply movement.

At the end of “Superman: Doomed” #2, Superman appears at some sort of Multiversial hub, where he can gaze in on various ‘dead’ eras of DC characters. That is exactly where this book picks up. Where it ends is, essentially, where “Action Comics” #35, picks up, with Superman heading back to Earth post-“Doomed.” The story takes place, roughly, over the amount of time it takes Superman to go from clean shaven to a heavy 5 o’clock shadow. So, depending on his New 52 swarthiness, this was either a day, or up to 10 days, in the life of Superman.

The issue does a nice job of tying in various pieces of DC mythology in subtle ways, while also doing so in not-so-subtle ways. For instance, when confronted with Brainiac, Superman is told that “In every timeline, it always ends with you.” That is a pretty “Final Crisis” thing to say, don’t you think? The book has a number of those moments, where the tone of the conversation leads you back to a classic DC text, but never in a way that is too over the top or confusing to folks unfamiliar with the referenced text.

But the book also, visually, brings you on a journey through DC history. We encounter a number of Brainiacs, from the classic 60s version to the Superpowers toy-line version to the more modern Brainiac appearance – if only the giant spider from Superman Lives had shown up, we’d be all set. There is a moment of Brainiac showing Superman the ways that various other Supermen (Supermans?) had sacrificed themselves over time, and that scene has quite a few allusions to past stories, all adapted from Ethan Van Sciver’s usual style into something more closely resembling the original tales. Van Sciver, overall, does some solid work here, but his style remains more static than I typically enjoy in a superhero comic, especially a Superman one.

His few two-page splashes are really where he shines, however. The best one is an MC Esher-esque labyrinth of cities, from Kamandi’s destroyed New York to Fawcett City to the Golden Age Metropolis, to the Gotham of the 1800s, and more. This is where Van Sciver can do what he does best – his attention to detail is stunning, and because the piece doesn’t suggest motion, everything looks fantastic. Van Sciver, if he ever is looking for a slight career shift, would make a great cover artist.

And, because there really isn’t that much to say, that’s sort of the story in a nutshell. Superman is on this weird planet of past histories, and then he leaves. Tada.

However, the book does have an appendix of sorts, and that is where I was most entertained. DC lays out which cities are featured in the book, and the list is shockingly heavy on Metropoli and Gothams. I had hopes for Opal City, or the Underworld from “Batman Odyssey,” or some other weird, but iconic, city. But fear not! We also get Earth C- and “San Diego, California” from the Wildstorm universe, so there is some fun weirdness hanging around the periphery.

In the lead up to this, Dan DiDio very clearly stated that “every story matters;” this event was DC’s loving look back at its past, while pushing forward. That is nice lip service, but when the villain of the book says that certain worlds will survive and others will die, it also means that DC is still culling its past, still whittling down parts of continuity it wants to go away. And that just isn’t cool in my book – why get rid of anything? Literally no one gives a shit about the Tangent Universe, so let it go untouched. People love pre-Crisis stuff, so celebrate it! Who cares if an era was a disaster or a success – time has passed, wounds have healed, let’s just tell new stories and not need to destroy old ones.

Of course, DC could prove me wrong by saving them all, and that would be swell, but we’ll see what actually happens.

Overall, this is the definition of a comic that would’ve been celebrated as a free digital supplement – a little backstory on the cities involved, a nice looking Superman story, and a way to get a reader who has stayed off the internet for the better part of a year up to speed on the event. As a five dollar comic, it feels a bit light, both in terms of page count and in terms of impact. And there’s the rub: the content is ok, but the price is insulting – and if that isn’t the story of too many Big 2 comics in 2015, I’m not really sure what is.

Final Verdict: 5.8 – A functional entry point, but one that feels slight and overpriced.