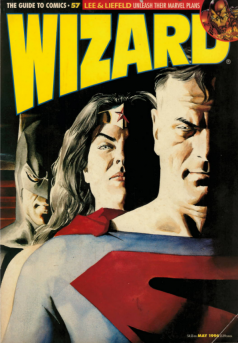 Onslaught
After opening the cover, the first thing you see is the ad below. As I mentioned in my review of “Wizard” #56 last week, I was aware of but never read the Onslaught crossover. Images like this one are what made me think Onslaught just had to be amazing. At the time, I really looked forward to growing up so I could afford to read X-Men comics. 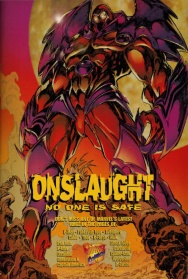 News items
Marvel EiC Bob Harras announced that the clone saga was ending and that Peter Parker would be returning as the real Spider-Man. Fans (and “Wizard”) had been complaining about the convoluted storyline since before it started, but until now Marvel’s response was “But it’s selling so well! That noise is just a vocal minority.” After revealing the outcome of a story still in progress, Harras mentioned that it won’t actually conclude until October when the Onslaught epic was over.

Superman co-creator Jerry Siegel died January 29, 1996. That news got a short blurb last month, and this issue he received a full page tribute that did its best to give a full summary of his life. Obviously, there was more of interest to comic fans than what was fit in here, but it’s a pretty nice write up.

”Batman: The Long Halloween”, which would become a phenomenon and an enduring classic, was announced in three tiny sentences among other publisher news.

Although sales on ”Captain America” had nearly doubled in the brief time since Mark Waid took over the title, he announced that he would be leaving it when Rob Liefeld took control of it for the Heroes Reborn era, still codenamed “Unfinished Business”.

The question of the month on the Wizard World website asked fans if they preferred toys that looked good or toys that were posable. The results were an almost even split with a slight margin (56%) in favor of articulation. An overwhelming number (88%) said an action feature like a firing missile should not interfere with articulation. I can only assume the other 12% have never played with a toy.

Brave New World shares more detail on Rob Liefeld and Jim Lee’s upcoming launches for Heroes Reborn. Bob Harras goes out of his way to clarify that even though the universe is relaunching, it’s an “organic” thing and that it doesn’t erase any previous stories like “Crisis on Infinite Earths” did. Liefeld specifically says that Captain America will NOT have shoulder pads. When asked about the negative response to the announcement from professionals, Liefeld suggested they were jealous.

The Kingdom Comes is a showcase of Alex Ross art for the highly anticipated “Kingdom Come” series. Fun to look at, but not really much here.

Q&A with Dan Jurgens focuses on his then-recent short stints on “Solar” and “Sensational Spider-Man” when he had a reputation for long-term commitments. He said the “Solar” move was due to the downturn in the industry, but blamed the Spider-Man move was due entirely to chaos at Marvel, where it was “almost impossible to do good work.”

How to Make a Homemade Hero is a four-page, five-step guide on how to turn one action figure into another one. The pictures sure make it look quick and easy, but as someone who has tried to kitbash toys before, I can say that this article is the equivalent of Bob Ross putting in a happy tree with four brush strokes and then telling you to do it too. At one point, it really says “study a picture … of an ear”, then sculpt one. Good luck!

A Toy’s Story, cleverly punning the original Pixar movie title, details the process behind creating an action figure at Toy Biz. In addition to the manufacturing steps, there’s also insight into how characters are chosen and a clear-as-clear-can-be dispelling of the “female figures are hard to sell” myth, straight from the toymaker’s mouth.

Rounding out this month’s toy theme was a special report on Toy Fair ’96. There was lots of excitement for a variety of toys and talk about how amazing these figures are. This is less than a year before the introduction of ball and socket joints that allowed a toy to have motion beyond a rotating joint or a hinge joint. We’ve come along way since this was the best option available: 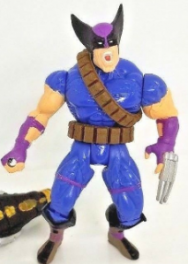 Trailer Park finally gets the casting for Batman & Robin right after months of incorrect speculating. “Wizard” seems excited for it, which makes reading about it kind of like watching an enactment of Romeo and Juliet – the people involved are really happy and hopeful and the audience starts to think that maybe this time they’ll get the happy ending we want them to have, but we’re fully aware that the franchise is killed in the end.

Manga Scene gives some historical background on Osamu Tezuma, the man who made manga popular in Japan. This article was prompted by the release of the first translation of Tezuma’s work in America. I’ve never read anything from him, and this article doesn’t make me want to because it’s more of a biography than a persuasive essay on why I should bother to look up the ten volume “Adolf” manga.

Top Picks
The two biggies this month are the “Batman: Black & White” anthology and the “Silver Surfer: Dangerous Artifacts” one-shot. Both solid choices in my opinion. Neither had any lasting impact on their subject, but that also gives them a timeless quality that lets them stand the test of time easier.

The Top 10 Back Issues
“X-Files” #1 from Topps remains at the top of the list, supported by the show’s popularity and promotion in national outlets like “TV Guide”. The first two issues of “Marvel vs DC” fell in spots 2 and 7, respectively. The first two issues of “Preacher” filled spots 3 and 4. The first issue of the “Gen 13” miniseries was still hanging on at spot five, and the remaining spots (6, 8, 9, and 10) were occupied by Bad Girls “Lady Death”, “Shi”, “Dawn”, and “Angela”.

Market Watch
Last month, “Wizard” reported that the Marvel/DC crossover was popular but still cover price because it was over printed and copies were available everywhere. This month, the first issue has sold out of its second printing and is starting to increase in value. It looks like this would have been a pretty good investment for any speculators, as most good-condition copies I see today are still selling well over cover price. This is surprising, considering they were the top selling comics of the era.

That’s everything of note for this issue of “Wizard”. Check back next Thursday for the final installment of my summer binge of the guide to comics.