In my final review of “Wizard” for the summer, issue 58 serves up some real head scratchers. How did Marvel botch the Ultraverse so badly? Why did Heidi McDonald get a pie in the face? How was teen Tony Stark not the worst character revamp? And why did “Kingdom Come” get shafted? 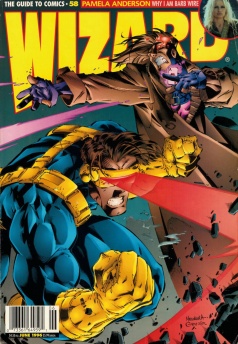 The Bunny Award
Every issue, one letter was selected to be “letter of the month”. It was highlighted in a special box and given the meaningless “Bunny Award”. Having read several of them, there was no rhyme or reason to what would earn the title. Some were full of praise, some were critical, and some were insane.

This month’s Bunny Award winner was from a toy store employee who wrote about a customer who told him that he “shouldn’t be allowed to buy [Star Wars] toys” if he was going to open them. The writer argued that toys are meant to be enjoyed the same way comics are meant to be read, and that the collector mentality is bad for the hobby. Letter editor Jim McLauchlin agreed with him, adding that he hoped the new toy price guide in Wizard wouldn’t affect the way readers enjoyed their toys.

As a recovered toy collector myself, I never understood the appeal of mint in sealed box (MISB) collecting. The packaging might look nice, but it was never nice enough to stop me from getting the toy out eventually. In many instances I kept the packaging after removing the toy, but I had to quit that when the volume just got too large.

News
After years of interconnected continuity and massive storylines, Bat editor Denny O’Neil announced the nine (!) the Bat family books would be self-contained for at least a year. An individual title might have a three-part story, but all subplots and to-be-continueds would stay within a single series. This would make life easier for readers and writers. Readers wouldn’t feel compelled to buy more than they wanted, and writers would have fewer constraints. O’Neil pointed out this would allow for more guest starts from outside the Bat Family since stories wouldn’t have to be scheduled so far in advance.

Dark Horse was gearing up to publish the “Star Wars: Shadow of the Empire” miniseries which was being heavily promoted. I was aware of the novel, but was unaware the comic was an expansion of it rather than an adaptation. I’ve recently started reading some of the old EU stuff, and a copy of that novel has so far eluded me. I’m glad to know I need to find the comic as well.

At the end of 1995, Marvel cut the Ultraverse line they bought from Malibu down to three titles. In April 1996, it was revamped to generate some more interest. Gotta be honest though, if the image below is how they were depicting Adam Warlock, they deserved to get canceled. Geez. 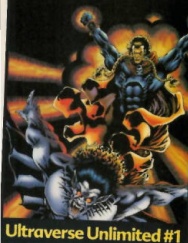 The Friends of Lulu had a contest of some sort, but all Wizard ran were photos of Heidi McDonald getting a pie in the face. This apparently raised funds for the organization somehow, and the little blurb suggested their might be a second contest next year. This is really frustrating, because I’ve been trying to dig up more information on the FOL for a while and this blurb doesn’t really say anything.

The poll of the month asked which of the recent character changes was handled best, and the Hal Jordan/Kyle Rayner direction received an overwhelming 57% percent of the vote, beating out second place Iron Man/Teen Tony, third place Peter Parker/Ben Reilly, and fourth place Oliver Queen/Whatever his son’s name was. I find these results surprising because when it was happening, fans hated what was done to Hal Jordan. I can only assume it got high marks because it was the oldest option and because Ron Marz did such a good job making Kyle interesting. The Iron Man swap was a terrible retcon that was erased just a few months later with Heroes Reborn and forgotten by Heroes Return. I though everyone hated the Spider-Clone mess that was driving sales down and had already been announced as switching back the time of this survey, but 10% thought it was the best of the four. And the Green Arrow one… I’ve only read a few of those issues, but they seemed pretty decent to me. There had been nearly zero coverage of it either way in “Wizard”. It’s last place rank seems unfair to me.

Alan Moore was announced as the new “Supreme” writer in August, and his run ended up being fantastic. It was cut short when he wasn’t paid, but Checker released two trade paperbacks collecting his run, and they read fine with just a few dangling plot threads. I highly recommend them, if you can locate them. A few years ago, the story was revived along with “Glory” and “Prophet” with Eric Larson working off a script Moore had turned in but was never published. His art was a poor fit in my opinion and the short-lived return isn’t worth your time.

Features
High Wire is a two-page interview with Pamela Anderson about her role in the Barb Wire film, which was based on a Dark Horse comic. It might be interesting if you care about the actress or the character, but if you don’t care before you start reading it, the article doesn’t offer anything to change your mind.

How to Spot a Comic Geek is a two page spread that… makes fun of comic readers? I’m not sure why this got printed. It has no byline and no photo credit. It strikes me as more cruel that funny, but your mileage may vary. 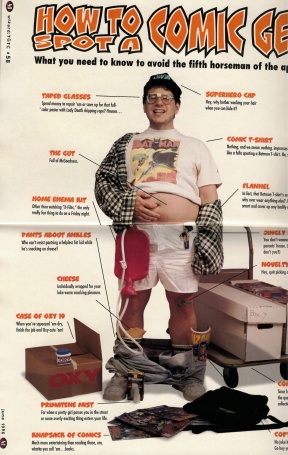 First Look: Matrix
In July 1996, DC debuted its Matrix imprint, which was supposed to be the sci-fi version of horror-themed Vertigo and crime-themed Paradox Press. This two-page promotional piece named seven upcoming titles, of which I’ve heard of zero. According to the Overstreet Price Guide, the imprint was renamed Helix before the first series (“Cyberella”) went on sale. OPG also confirms all seven series were actually published (and one got a sequel), but the three ongoings are listed as limited series.

Waking the Devil is a two-page look at what Karl Kesel was planning for his “Daredevil” run. He promised wise-cracks, smiles, and whimsy. Sounds a lot like Mark Waid’s take from 2012.

You Can’t Handle the Truth! was three pages of “Wizard” reminding readers about the top ten unresolved plots from the X-Men franchise, asking editor Bob Harras for input, then providing their best guess at how and when it would resolve. Fun stuff, even for people like me who only know the X-Men from the animated cartoon.

Q&A with Dave Sim is exactly what it sounds like for five pages. He has some unusual opinions (it is Dave Sim, after all), and the one that stood out to me was when he was asked if the plot for “Cerebus” was written out so someone else could finish it if he died. Sim said no, and that if he died before issue 300 it would be because God didn’t like what he was doing anymore.

The next five pages belong to Small Wonders, a brief look at eight indie creators. For some reason, two of the eight are dressed like animals in their portraits. Consider this your reminder to track down “Strangers in Paradise” if you haven’t read it yet.

Instead of Greg Capullo leading the how-to-draw segment this month, the segment is revamped to allow different creators in the art process to show off their skills and give some tips. The inaugural presenter is Jimmy Palmiotti, who walks the reader through inking. He presents a pencil sketch and a variety of ink jobs using different tools and adding different effects. It’s very educational and serves as a reminder of just how much the inker adds to the finished product.

Picks
There are two top picks this month: “Green Lantern” #75 and “Avengers” #400. The first is a conclusion to a long-running plot and the other is a double-sized anniversary issue that also kicks off the Onslaught crossover. Both fine picks I guess. What I can’t figure out is why “Kingdom Come” is lumped in with all the other short blurbs for upcoming books. The series has been given three (maybe more) multi-page promotion pieces, including in this issue. It was the cover feature for last month’s issue. And now it doesn’t even warrant a top pick? Was DC paying for the coverage or something?

Drawing Board
The section featuring art submitted by fans is usually average at best, sometimes pretty poor. This month had two entries that really impressed me personally. First was this entry, judged best by the “Wizard” staff, sent in by Malcolm Zinzan: 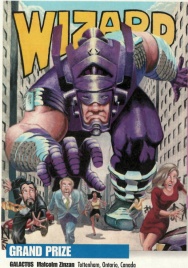 Then there was this Lobo sent in by an amateur hoping to turn pro, Leinil Yu. Keep chasing those dreams, Leinil! 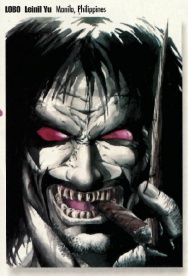 Market Watch
Amalgam titles were popular, with the lowest seller (“Doctor Strangefate”) still managing to be the 21st best seller of the month. Bad Girls books had a strong month after looking weak in the last report, and Mark Waid’s work on “Impulse” was being rewarded with rising sales. Meanwhile, the made-for-TV Generation X film was awful, but it brought attention to the comic and caused prices to rise.

Mort of the Month
“Wizard” used to have a feature that spotlighted ridiculous characters and mocked them. This month’s special guest was Hector Hammond. Geoff Johns did his best to give this character some dignity, but I think “Wizard” had it right. How this guy got into that awful Green Lantern movie is still a mystery to me, but I guess he wasn’t the worst thing in it.

The end of “Wizard” reviews?
My summer binge is over, so there won’t be a review of “Wizard” #59 next week. If you enjoyed these summaries, let me know and maybe they’ll be back next summer.