Cullen Bunn and Jeremy Haun knock it out of the park with the first issue of their gore-soaked mini-series. 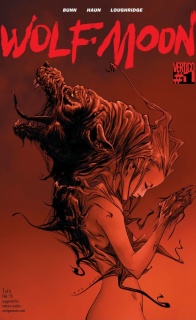 When Dillon Chase’s family was slaughtered by the wolf, his life was forever changed. Dillon sets out to destroy the creature, but he soon learns that lycanthropy is far more insidious than the legends ever said.

Hooray for another mini-series. As much as I love continuous storylines there’s something about knowing there’s a succinct narrative arc that makes me excited to pick up a new comic. Where does the creator want to go? What is the story they’re setting out to tell? It’s all got to be so much clearer and more concise if they’re going to get it done in six issues.

After being drawn in by Bunn’s previous work on “Magneto”, but subsequently more than a little underwhelmed by his last venture with DC’s “Lobo” revamp I was pretty interested to see how this unknown mini played out.

And I’ll say this for Bunn, he doesn’t wait time getting to the good stuff. We’re treated to not only the titular ‘Moon’, but also its friend ‘Wolf’ within the first two pages. Bunn executes a great set-piece introducing the tone of the series as well as exposing us to some real threat. We feel the impact of the wolf straight away and the confidence of that reveal definitely helps us understand the threat of the eponymous antagonist in a simple and straightforward manner.

Haun’s use of almost exclusively close-up panels during the numerous acts of wolfery make for the comic-book equivalent to well-executed shaky-cam. The tight, isolated images have you rushing from panel to panel to try and construct a more complete picture of what’s happened, urging the story on in a really cinematic way.

It’s a credit both to Bunn’s writing chops and Haun’s art that, during these action sequences, the art is left unencumbered by text to take centre stage. Given the limited nature of a six issue run it would have been easy to succumb to the temptation to fill the first issue with world-building, expositional narration but, other than some musing on the potential for a werewolf to be classified as an apex predator, Bunn’s protagonist Dillon is relatively silent.

Dillon’s characterisation isn’t exactly breaking new ground (the scruffy, stoic loner is hardly a unique concept to any comic) but, with such a short space of time, it makes sense to start out with tropes your audience can identify with easily. What’s more, Bunn manages to inject enough intrigue and personality into his protagonist that Dillon feels less like a hollow caricature and more like a character with unseen depths waiting to be visited. Plus, any character who can stare down the barrel of a gun at an eight foot tall wolf-man and say, with a straight face, “Down boy” is the epitome of badass in my books.

Something else that sets this comic apart from the pack (pun definitely intended) is the well executed violence and gore. It’s not Tarantino levels of blood squibs, but Haun manages to capture the gut-wrenching visuals of people having their guts literally wrenched from their bodies with an eerie accuracy. Even the most torn up bodies are still recognisable as human beings, a fact that makes the art even more unsettling. This is one of the first comic books I’ve read in a while that managed to make me squirm.

The art oscillates between a heavily shaded, almost Mignola-esque, vibe and a more traditional, colour soaked, horror comic-book panelling and it gives this issue the slow, creeping terror that the scripting deserves. The lettering is solid enough, however the choice to underline rather than bold the important elements of the narration makes the speech read a little too heavy in my opinion, but that’s very much just personal preference. Honestly this book is at its blood-soaked best when the words take a backseat in favour of the art, which flows in a tense, shocking way when let loose.

The narrative arc is set up well in this first issue and there is a big twist in the last few pages of the issue that show that Bunn is taking the werewolf myth and putting his own spin  on things in a very interesting way. It’ll hopefully allow for a number of different set pieces as well as a more unique retelling of this classic curse. The explanation of this new concept is swift and succinct, delivered in Dillon’s dry, stoic manner, and doesn’t feel at all unnatural (except for the decidedly supernatural elements, of course).

Overall the first issue does exactly what you’d want from an introduction to a mini-series. It sets up the characters, the conflict, and the protagonist’s goal in easy brushstrokes, and gives you enough of a hook that you’re definitely ready to read on when you turn the final page.

Final Verdict: 7.0 – For any gorehounds or fans of horror “Wolf Moon” is a must read.  A mini-series that kicks off with a silver-coated bang.