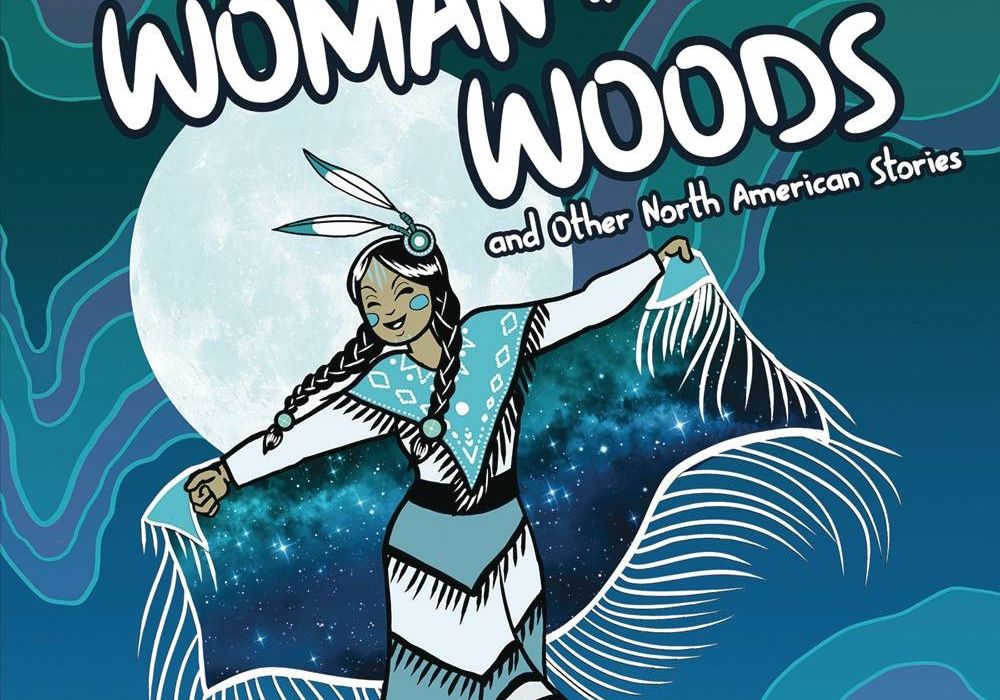 One of the main questions that was used in a writing critique group I belonged to was “how does this story make you feel?”

The answer to that question for The Woman in the Woods and Other North American Stories is that I feel compassion and kindness emanating from its pages, in some cases almost enfolding the reader. 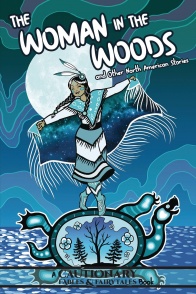 Woman in the Woods is a Kickstarter-backed comic anthology from Iron Circus Comics by Indigenous creators that features narrative tales and retellings of North American legends. There are eight tales altogether. Four are legends, two feature non-humans interacting with humans, and one is set in the present day. The art is black and white and features different styles but it’s all confident, excellent work, using imagery to enhance the type of story being told.

The anthology opens with “As Was Told To Me,” created by Elijah Forbes, a tale of the two-spirit creator who judges that life worth living, despite all the myriad flaws of humanity. It’s told by a counselor to a child wearing a trans pride t-shirt. The Creator first appears coming out of what looks to be a sea, with bubbles around her. That image is referenced again near the end of the tale, as those small bubbles, trees, and simple flowers, flow out from the creator. It’s affirming and hopeful, without downplaying our current realities.

“Chokfi” written by Jordaan Arledge and drawn by Mekala Nava, is a trickster tale inspired by Chickasaw tales of a rabbit who longs to have the best coat but doesn’t reckon with the fact that rabbits cannot hunt. This is a fun story, with humor laced through the art, especially in the facial expressions. There is a wonderful panel of an over-confident Chokfi posing with the rope he’ll use to hunt and that is followed by another of Chokfi falling with the rope out of his hands.

“White Horse Plains, ” drawn by Rhael McGregor, with a story consult by Sylvia Boyer, has three feuding First Nations groups. That feud eventually destroys a peaceful wedding and creates a ghost horse intent on saving others before they’re lost. There is a disturbing and effective panel of a Cree warrior holding a rifle that he’s bought from European traders, as the warrior appears baffled and interested, an effective call-out to the horrible changes brought into the First Nations groups by these strangers.

“The Rougarou” by author Maija Ambrose Plamondon and artist Milo Applejohn, features a monster so terrifying that to look at it is to also become a monster. A child’s compassion is the key to not only survival for them but also in rescuing the monster. I had no idea as I was reading if the story would end in tragedy. The final panel’s artwork created the kind of warmth I mentioned in the opening paragraph. The darker shadings used in this story to depict the woods versus the lighter, more civilized elements are effective, especially in creating fear of the monster. This was my favorite story in the anthology.

“Agonjin in the Water,” by Alice RL, has a lost child in a land of drought who finds the spirit of the water and becomes its friend. Like “Rougarou,” it’s about a child seeking out the unknown and befriending it, to the benefit of all. I love the expressive eyes in this story and how the child and the spirit’s dialogues seem like roots that are binding them together in friendship.

“The Woman in the Woods,” by Mercedes Acosta, the title story, is about the draw of a woman to another who is the personification of the woods and the land surrounding her home. There are wonderful symbolic choices made for the bond between them, especially a necklace. I love how the woods are depicted as lush and mysterious but also as home.

“Into the Darkness” written and illustrated by Izzy Roberts, and lettered by Aubrie Warner, is a modern-day story of teens who keep trying to prove how not-scared they are of things that supposedly move in the dark. The art is starker and simpler than in the other stories but effective in depicting the horror of the boys who take a dare that turns out to be scarier than they believed. The darkness is sometimes only broken by flashlights and the walls are unadorned, emphasizing the sound effect of the noise from the outside.

“By the Light of the Moon” written by Jeffrey Veregge, art by Alina Pete, takes the reader into the sea, into the ancient magic of the octopus and other creatures. The is lush and detailed art. Jellyfish are depicted as bright lights and the divers are in silhouette in the depths, while the Moon and the Octopus Woman are given a full panel. It’s an appropriate ending for a book full of wonder.

This is Iron Circus Comics’ thirteenth Kickstarter, all of which have been fulfilled. This is the fifth volume in the Cautionary Fables and Fairy Tales series and after having read this one, I’m going to have to purchase the others, which are available at the Iron Circus site.