“Wonder Twins” manages to be, at the same time, a comic one can use to bring new readers to the medium, and a celebration of how comics influenced other media and feeds into its own loop. Great art, great characters, light, and yet relevant… this one is quite the surprise. 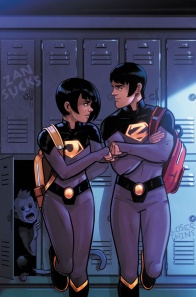 Exiled from their home planet, alien heroes Zan and Jayna must navigate life as teens on Earth at South Metropolis High School, where they’re even bigger outsiders than the typical awkward young adults. Under the watchful eye of Superman, the brother and sister pull monitor duty at the Hall of Justice as interns, while also trying to overcome the pitfalls of Zan’s brash confidence and Jayna’s shy but streetwise persona. If you think you know the Wonder Twins, think again-this book takes the form of the unexpected.

Approaching this mini-series with some trepidation is, perhaps, par for the course for its creative team and overall concepts. Actually, it is part of its own solicits how unexpected “Wonder Twins” could be. Having said that, the biggest surprise of them all is how the story makes readers care and sympathise with Jayna and Zan so effortlessly, by avoiding the unnecessary explanation of part appearances and mediums, and delivering on solid storytelling and a modicum of fan service for its older audience.

A lot of the apparent effortlessness to make these characters compelling comes from how effective Byrne is on portraying them and the situations they are in. If the twins are in the middle of a typical high school facility, or retelling their extra-terrestrial lineage, everything just clicks into place. Facial expressions are excellent, with a heavy dose of comedic infusion. It is impossible not to compare it with the master of expressions, Kevin Maguire, but that should come as a compliment to Byrne and how his storytelling benefits from it. Such precision is not reserved only for the Wonder Twins either: far more established characters of the DC pantheon join on that as well, and the pre-conceived notions readers have on them just adds to the comedy when they are shown behaving so differently from what is expected.

“Wonder Twins” #1 is by no means an action-heavy issue. Sure, there are some instances where it takes center stage, but it works more as contrast than the main course. Regardless, Byrne is also sharp on making those moments fit with the overall aesthetics he is going for. It feels out of place just enough to be shown as outlandish, but close enough to the more mundane aspects of the book.

For all its beautiful art, it is on how light and consistent the plot and narrative by Russell is that steals the show. There are some elements that make “Wonder Twins” one of those issues that simply work, regardless of the odds against it.

First of all, it operates slightly out and above the rules of suspension of disbelief one would come to expect from a big-two comic. What that means is that well-established characters are allowed to almost break the fourth wall, of almost acknowledging the insanity around them. It also lets them breathe a bit more freely, revealing aspects of themselves that other series would not dare touch (the nickname of a certain caped crusader comes to mind).

Second, it does not do all of that on the cost of being trivial. For readers of his “Flintstones” and “Snagglepuss” series, it should be no surprise that Russell is unafraid of touching relevant social topics and situations. And by doing that on an unassuming manner, the writer achieves an open door policy that nothing should be seen as taboo… just as long as it is presented and discussed in an honest way.

Wrapping it all together, it most certainly realizes that the reason why its titular “Wonder Twins” are beloved is because they were created on a separate medium, and on a far-removed real world timing and generation. It is unafraid to poke fun at some of its original DNA (supercomputer indeed!), but it avoids that thin line of being disrespectful to that source material. There is a lot for older fans to appreciate on this first issue, from ‘blink-and-you’ll-miss’ cameos, to generational humor to how certain power sets are limited in strength… but spot-on on excitement.

All in all, “Wonder Twins” should not work. It uses decades-old characters that failed on every previous attempt of being modernized. It talks about relevant current topics in a offbeat way, it features little in terms of action and yet has a stylized artistic style. And, still… it works on every level. Wonder twin powers activate for sure!

Final Verdict: 8.9 – The adventures of Zana and Jayna are off to an excellent start. If this series remains as true to its concept as its debut issue, it will be sorely missed five issues from now when it wraps.