“Wonder Woman” #25 has a lot of dangling plot threads to wrap up as writer Greg Rucka and artists Liam Sharpe and Bilquis Evely complete their landmark run on the series. In “Wonder Woman” #24 Rucka and Evely beautifully touched on each character in the series and showed how their progression to the present kicks off. “Wonder Woman” #23 was another excellent chapter that showed the compassion of Diana, but where will Rucka depart and leave the rest of the cast in the wake of an incredibly touching moment. With the weight of the world on the shoulders of the full “Wonder Woman” creative team, I can’t wait to see how this story ends. 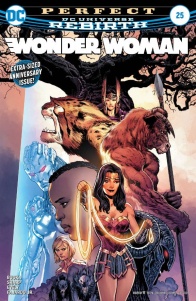 Writer Greg Rucka weaves together the threads of “The Lies,” “Year One,” “The Truth,” and “Godwatch”—every story in WONDER WOMAN since the start of the DC Universe Rebirth era—in this extra-sized anniversary issue

This issue of “Wonder Woman” reads more like an epilogue than I expected it to. Diana is reeling from the events of the past few issues and she’s especially upset about where the story left Dr. Barbara Minerva. Rucka addresses those moments but isn’t able or interested in wrapping up all those individual threads. This story or Greg Rucka’s work in general isn’t particularly dreary or isolating, it just isn’t the type of story that is here to give readers all the answers they could have ever wanted. The name of this arc is “Perfect” as not even Diana is a perfect hero able to save all of her friends and wrap this story up with a bow.

While this comic is packed with an onslaught of excellent character moments, the story goes a bit light on more than a few supporting cast members. It would have been great to have seen more fallout each member of the book and get the chance to see where each of the supporting cast of the overall “Wonder Woman” story ended up since Rebirth began. As far as lots of supporting cast members go, last issue was the chance that fans got to see where each character ended up at the end of Rucka’s tenure on the series. The pacing of this story is also a bit strange as Diana seems to wander around this chapter upset and confused, unsure of what to do next. This story in particular would only work in a serialized medium where are more opportunities to toy with story structure and character motivation.

Bilquis Evely and Liam Sharpe are a great fit for this issue and somehow do a great job seamlessly transitioning between very different styles of art. Sharpe is more loose with anatomy and does an excellent job with the breathtaking river scene as the artist is able to depict the full majesty of the nature surrounding the area. Sharpe also gets a chance to draw more characters in the DC Universe and results are breathtaking. “Wonder Woman” has been a more isolated comic over the past few years and seeing Rucka add more heroes from the DCU together gives this comic an immediate burst of energy. Evely does an excellent job fleshing out the surprisingly romantic parts of the story later on in the comic. The artist continues to give the comic a consistent and coherent tone with her evocative pencils. Thanks to these two artists and Nicola Scott I don’t think that you could find a more beautiful book in all of DC Rebirth. This is the gold standard.

Thankfully this comic isn’t all doom-and-gloom, similar to the rest of the run “Wonder Woman” does get a chance to reconnect with some old characters. Even after the great loss of Dr. Minerva, Diana gets a chance to see something magical proving that she is the one-and-only “Wonder Woman”. Then the entire chapter delivers an incredibly strong finish, putting Diana in a much different place than where the book began. These moments of pure majesty happen rarely enough that they have never felt cheesy our out of place in Rucka’s run. This installment stands in a very stark contrast to the end of Rucka’s very first “Wonder Woman” run whereas this time the writer got to write the ending that he had been planning up to this point. As much as a I enjoyed the past year of the story, I was also sad to see so much of the overall conflict resolved in issue #23, which seemed to wrap up the massive “The Lies” storyline.

“Wonder Woman” was my favorite series in all of Rebirth and I’m very sad to see this creative leave the book. This final installment of the run is of an incredibly high quality but still didn’t leave me entirely satisfied. Much like Diana herself, the loose ends of Cheetah and some of the mysteries surrounding the supporting cast is really eating at me especially as last issue delivered some truly heart-aching character developments involving the Dr. Minerva. Taken in a vacuum, this comic book is a great “Wonder Woman” issue and a solid, but unexpected ending to Greg Rucka, Liam Sharpe, Nicola Scott and Bilquis Evely’s phenomenal “Wonder Woman” run.

Final Verdict: 8.0- “Wonder Woman” #25 closes out a massive run with a near perfect ending.