“Wonder Woman” #31 marked the first issue of writer James Robinson’s run on the title centered around Wonder Woman’s lost brother Jason. The story was odd, containing little references to the brother in question and few conventional superhero action beats proving Robinson’s take on the character was going to be wholly unique. The story teased some important plot threads for the overall DC Universe and de-emphasized Wonder Woman’s role dramatically.

With Grail and Darkseid serving as the two major antagonists of the comic so far, could this story be leading into some kind of event? With the book’s rapid shipping schedule, Robinson will have more pressure than ever to find some sort of groove or tone for his take on “Wonder Woman”–is his second entry into the run the one that’s going to be able to find a solid groove? 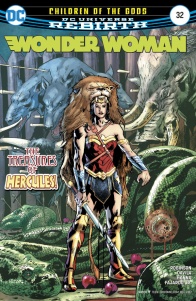 “CHILDREN OF THE GODS” part two! Wonder Woman must find out who is targeting Zeus’s children before their sights are set on her! What kind of monster has the power to murder a demigod?!

“Wonder Woman” #32 continues the odd structure of Robinson’s run as Diana is granted the inheritance of Hercules who met his end in the previous issue. The story’s structure starts with a common type of low-stakes brawl which kicks off many superhero stories in the modern day. This leads to a non-linear set of flashbacks and plot points headed towards the debut of Prince’s twin brother Jason. Spending two issues getting to the character teased in the first solicitations and interviews in the book has made this title have a slow sense of progression. Robinson doesn’t tie any greater antagonist set up last issue deeper into the narrative and the tease at Jason consists of a splash page where the character has one line of dialogue.

In the initial fight sequence, Robinson arms Steve Trevor with clunky, repetitive dialogue breaking the elusive nature of the story. His on-the-nose playfulness is directly at odds with the surreal feeling Robinson is trying to create in the book. While infusing this story with light notes of humor would have been a great addition to the book, Robinson seems to be having a hard time finding a voice or striking a balance for Steve Trevor like the “Wonder Woman” feature film was able to craft.

There is something alienating about this comic which could be accounted for in the strange, off-beat nature of the plot here. A large chunk of this comic is spent with Prince coming to grips with huge soap opera-esque beats in her life which haven’t quite been built up towards properly. Prince learns her brother (whom she did not know) Hercules has just died and left her an inheritance. Then she reads a note he conveniently left before he died stating she had a twin brother (who Prince also did not know) that she magically finds at the end of the piece. Emotionally, these beats come off as hollow here. While there is plenty of time for Robinson to navigate these waters and bring this story together, this series has the pace of a daytime soap opera that will not let up on the huge plot beats.

Even with the switch in pencillers, DC has been able to keep a firm quality of artwork seen in past installments of the title. Sergio Davila pairs very well with the previous penciler Carlo Pagulayan. The issue noticeably retains colorist Romulo Fajardo Jr. and inker Scott Hanna to continue to keep the same clear, concise and detailed art style as shown in the previous installment of the book. While the pencils aren’t perfect as the faces in this book are strikingly inconsistent.

The action scenes are particularly detailed here as there’s a great splash page illustrating Wonder Woman colliding with a Parademon so harshly large cracks are depicted in their armor. On another action scene, there are bullet shells from Steve Trevor’s assault rifle bleeding through the panels. The talking head panels in the narrative slow the pace of the issue down but still feature some strong character acting but it’s not until the last couple of pages in which the comic finally starts to get energy back.

“Wonder Woman” #32 is by no means a bad comic but it does seem the full creative team is taking time to adjust to this character. In future issues when some of the groundwork is fleshed out, Robinson could start to deliver on the bizarre premise seeded in these first two installments of the run. There is a large portion of information and character relationships that are conveniently added to the issue at the last minute just to service the plot. If the creative team has a greater plan for everything surrounding the series and the comic has introduced some kind of a red herring, I would not at all want to pass judgment on it prematurely–but after two installments I still have no idea where James Robinson is going on in this current “Wonder Woman” run.

Final Verdict: 6.8 – “Wonder Woman” #32 is an enigma, teasing a premise and threat that feels opaque.