Borrowing “Wonder Woman” for the horror-centric October mini-crossover, a temporary change in the creative team leads the series momentarily in a different direction. 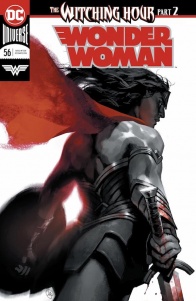 “The Witching Hour” part two! The Justice League Dark barely escaped their first encounter with Hecate, but they know she’ll be coming back for the power inside Wonder Woman. But what if Diana could tap into that power herself to take on Hecate directly?

James Tynion IV comes into “Wonder Woman” at a perfect point in the comic’s releases. Placed just after Steve Orlando’s run and just before the coming one by G. Willow Wilson, he is given freedom to use “Wonder Woman” #56, and presumably the subsequent issue, to advance his own story in time for October without intruding on any other run’s tone. In particular, Tynion pulls away from the conflicts with Amazons and/or gods, and turns instead toward magic itself, in a continuation of the ‘The Witching Hour’ crossover with his work on “Justice League Dark.” While the previous run may have been more adventurous delving into several pantheons both fictitious and based in real life mythology, Tynion takes on a very different focus, one based more heavily in Wonder Woman’s established rogues gallery and the dark take on magic brought forth by “Justice League Dark” itself.

Of course, the fact that the October horror story is told by the writer of “Justice League Dark” definitely leaves a mark on the structure of “Wonder Woman” #56. In all, the writing seems geared toward a focus on Wonder Woman, but not necessarily toward a “Wonder Woman” comic in and of itself, despite the name. Instead, Tynion’s writing seems to indicate that the second part of ‘The Witching Hour’ is, first and foremost, a story for the Justice League Dark, with Diana of Themyscira merely acting as a convenient focal character. The Witchmarked plotline was first mentioned in “Justice League Dark” shortly before the first one-shot of this crossover, and not in “Wonder Woman” itself. There are interludes focused on other magical beings, from Manitou Dawn to Deadman, however briefly they appear. On the one hand, this broader story helps to show how the magical world as a whole is affected by the machinations of Hecate, rather than focusing in on Wonder Woman’s particular, established corner of the DC Universe. On the other hand, the focus makes the entire comic seem like it fits best into the overall crossover instead of into Wonder Woman’s story in and of itself, despite an appearance from one of her most famous magically centered rogues.

By giving Hecate minimal, yet effective focus, Tynion is able to build on her menace. One of her sorceresses gives her backstory, but she herself does not actually appear in the present day, instead shown through her Witchmarked and the aforementioned sorceress. Rather than weaken the effect that the goddess of magic has on the world at large and the story itself, this limited direct focus allows Hecate to loom large over the entire setting, a creeping shadow just beyond readers’ narrative peripheral vision, so to speak.

The use of ancient, immortal beings coupled with superheroes allows Tynion to add a dash of humor to the overall horrific story. As the aforementioned antagonist explains, the theatrics of the superhero battles allows for some fun to alleviate boredom during the ages-long lifespan of a divine sorceress. Although Tynion does focus perhaps too heavily on his own, other comic within this one, he maintains a firm enough grasp on the makeup of Diana’s mystical world to make for an interesting meeting of the minds that combines the mystical, Greco-Roman divine elements with the darker black magic components brought forth by the Justice League Dark’s primary focuses.

Emanuela Lupacchino’s artwork, as is common of her style, showcases smooth faces and flowing motion, rather than sharp violence common to others. Especially when it comes to the women in the story (barring Hecate herself), this smoothness helps to illustrate an essential humanity that gives the impression of something, someone, to root for to save the world of magic itself. Fast action is present, but Lupacchino’s artwork always presents it with a certain degree of a mystical flow, rather than a violent harshness that breaks with the harmony of the world in an essential way. Even when men are turned to beasts, or fire erupts from nothing, everything seems to be somehow tied to the world rather than cutting into it. The only exception is Hecate herself, who, through her nearly monstrous three-faced form and disturbing possession of her Witchmarked, is shown to intrinsically break with the established order even as she is a part of it, her revolting appearance a stark contrast with the more recognizable, comforting looks for the other characters in the tale.

Even more essential is Romulo Fajardo Jr.’s coloring, which helps to give rise to many different emotions. The pale white on the faces of some antagonists or antagonistic forces give an ethereal, definitely supernatural bent to the story, while simultaneously making these visages into something altogether inhuman. However, other colors give mixed emotional strains. A glow of red eyes adds intense menace, while the brilliant sky blue and whites of a unicorn help to show the wonder and beauty of earlier magical influence. A calming, nature-based feel arises from a softer orange and yellow horizon, along with the shimmer of water dripping from a face that has just come out of the sea, contrasting against the sharp, glowing purple, black, and blood red of a key villainess-turned-temporary ally to demonstrate how much said person can manipulate or strike against nature.

In all, the art of “Wonder Woman” #56 is wondrous indeed, but perhaps the story is too beholden to its sister series, “Justice League Dark,” to stretch out on its own.

Final Verdict: 8.0– A very well told continuation of the ‘The Witching Hour’ crossover, but perhaps not much of a “Wonder Woman” story in and of itself.