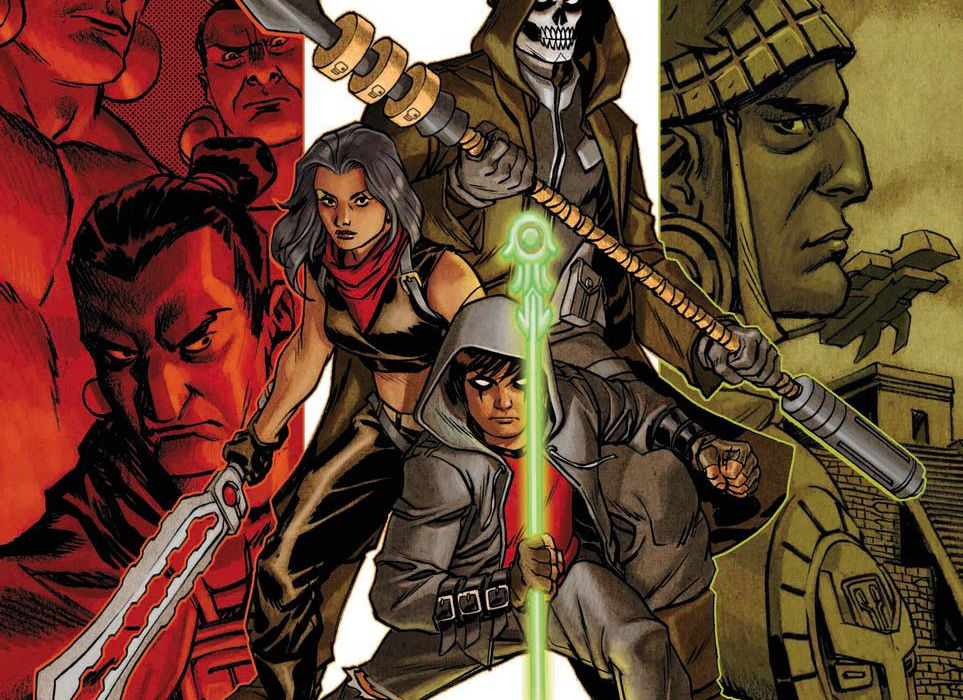 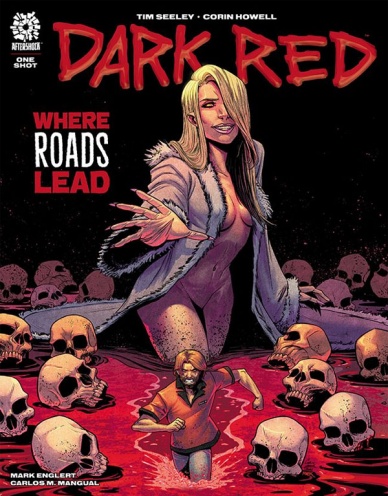 “Dark Red Where the Road Leads” is a somber tale from writer Tim Seeley and Illustrator Corin Howell that explores the neverending hell that is being a vampire in the heartlands. Seeley simultaneously moves the franchise forward while looking back into Chip’s past in a way that makes this one-shot issue feel more like a prequel somehow. He does this by bringing in an old friend Joe from World War II in a way that isn’t just nostalgic but central to the plot. Chip literally travels to hell to try and get Joe’s soul back and send him off to heaven and he brings along a voodoo-practicing Christian nun.

Seeley does spend several pages putting Chip on a soapbox, but mostly manages to land it in a place that is both poetic and central to his character development. For instance we begin the book with a voice-over speech about the quiet desperation that men live with in retirement homes. This adds emotion to the story by reminding us that men can give their souls and still be forgotten like they were nothing.

The soapbox is really on display when Chip finally faces his adversary.. named the Adversary. Not really sure what literary reference that alludes to but I’m guessing there is one. Anywho, Chip sermonizes a bit over topics like the country changing from the one he fought for to not wanting to be forgotten, and the motivation doesn’t quite connect with the central quest which is to save Joe. In the end he brings it home to the title, where all roads lead, reminding the audience no matter what he does, he ends up going back to nowhere.

Howell brings an energetic style to the book with thick splashes of blood suspended in mid air and many backgrounds filled with speed lines. There are many fun panels with guts being kicked out of demon’s mouths to tanks that are filled with intestines instead of humans. The backgrounds are mostly non-existent and I found myself not being able to visually discern the environment from earth and hell, which might have been on purpose. Most of the backgrounds are filled with either dark solid colors or speed lines and I feel there is a missed opportunity to convey more dread and atmosphere in the story.

Final Verdict: 6.5 – Not a bad intro to the world of Dark Red, even if it is after the main series ended. 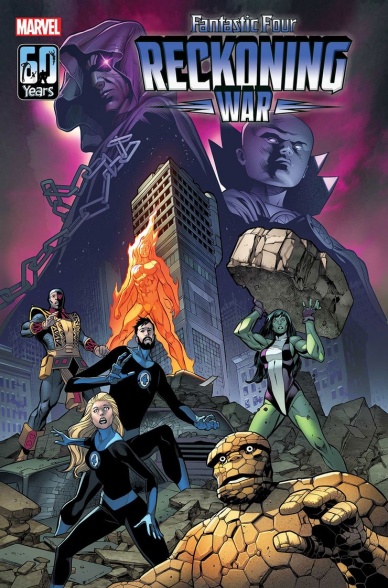 “Fantastic Four: Reckoning War Alpha” #1 lives up to the bombastic name with the huge bevy of characters introduced in the series. This special issue is best for those who have been keeping a close eye on Marvel continuity. Slott is using the series to tie lots of his previous Marvel runs together so fans who like his work, in particular, will find nice easter eggs in this chapter. The attention to continuity will leave newer readers scrambling to pick up the pieces though. Marvel has a nice text box here getting readers up to speed on The Watcher but the amount of exposition in this chapter may deter some readers from digging into the issue deeply. Slott brings so many different cosmic forces into the chapter that the tale can get unruly. Longtime Marvel readers should find comfort in the chaos here. Slott continues to show how your favorite Marvel Cosmic characters have hidden ties to the Reckoning War or other alien species.

It is commendable to consider how consistent the art is in “Fantastic Four: Reckoning War Alpha” #1 despite the vast amount of creators contributing to the work. Color artist Guru-eFX and letterer VC’s Joe Caramagna should be commended for the amount of artistic cohesion in this issue packed with so many collaborators. The division of interior art is not clearly labeled in the issue so I’m unsure who did what panel. I can definitely appreciate the time and dedication that each artist contributed here. The final pages utilize the psychological horror nature of the series really well. I liked how clean the art was in the opening pages when Slott was explaining the complicated status quo for Nick Fury and The Watcher. The pulp nature of the last page clashes with the tone of art establishes at the beginning of the issue slightly. This is not a perfect issue artistically but each artist tackles this huge script with grace. 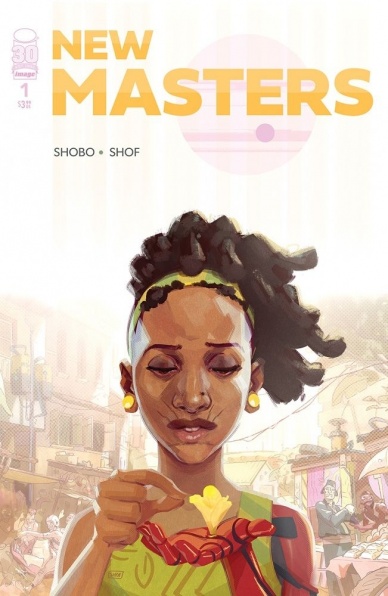 “New Masters” #1 is one of the best kinds of first issues you get in comics. It’s teeming with life and potential, thrusting you into an Afro-futuristic world with complex inter-species politics, rich settings, a number of plot threads, and a solid MacGuffin. This is an issue primarily focused on acquainting readers with this new world. The Cokers do strong work at showing instead of telling for the most part. The Ola sequence at the beginning is an excellent means of establishing tone, showing readers just how large and dynamic the setting is, and connecting us to a character quickly.

The other 40% of the issue is more jam-packed with information to digest but the issue does strong work at being accessible and at making exposition feel natural. Take, for instance, the Obsidium divers and the way that they’re used to illustrate the way that class functions in this society and how humans and aliens get along. It grounds it in character while explicitly explaining things to readers without feeling like a slog.

The art is excellent. Shof has taken great care to illustrate African landscapes and architecture in a way that anyone gets to see in any medium all that often. The costume design is a great blend of more traditional African pieces and speculative fashion. The Black characters are given diverse skin tones, hair, and features- another decision that makes it clear how rarely these things happen in media. The aliens are interesting, too, though given how inventive the rest of the issue is, it’s a shame to see that they’re mostly pretty human looking with some extra odd features or strange skin colors.

The biggest issue with “New Masters” #1 is certainly its ending. It’s not so much that it’s not setting up an interesting miniseries as it just ends very suddenly. A cool MacGuffin is described and very interesting looking mercenary teams are teased but then things just end. Even if one can make some logical inferences about where the story is headed, it’s bizarre to finish an issue and feel like it needs a solid 3 more pages to actually be finished. 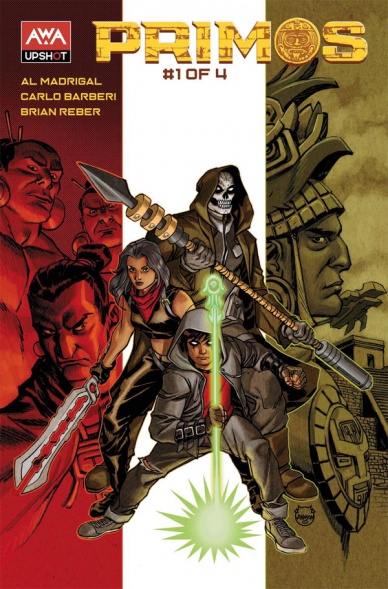 “Primos” is an original story that Al Madrigal created for people of color to see themselves in comic books. He does a great job of not only doing that but also introducing a new universe/world in the first issue. The main character, Ricky Pascal, is a young teenager who is also the narrator, so the tone is laid-back enough that the reader can sense how much fun Ricky is having and the sense of fear of being over his head. Madrigal’s introduction to Ricky has him on the losing side of a fight from the jump, and then in the flashback, he’s trying to fight back against a shaman with a bat, so he doesn’t think things all the way through. This is great because Madrigal gives the audience a flawed character that they can root for, and hopefully, succeed. This incredible sense of history and spiritualism by having the Mayan element mixed with the science fiction genre creates something original and keeps the reader engaged. The idea of Shamans not only coming back home centuries later but seeing their people now subjected to racism and disregard for history as if their whole mission was for nothing is a solid way to start a series.

Carlo Barberi as the illustrator for this story, was a great choice because he gets to flex his creative muscles with the mix of Mayan architecture, a fictional universe, and aliens. Since this is the introductory issue of the series, it’s more about setting the groundwork, so the audience is told a lot rather than any action. Barberi excels at showing emotions to the characters rather than keeping them stone-faced even. There is a scene where the main shaman is both worried and fearful of his brother’s drunkness and how it can affect their mission and return home. With the aforementioned mix of genres and eras in time, Barberi constructs a Mayan space ship that showcases the Mayan design for the outside and uses their hieroglyphics as the controls for the inside of the ship. Brian Reber as the colorist also brings great energy to the storyline by making everything very bright and vibrant.

Final Verdict: 8.0 – A fantastic new story that utilizes Latinx culture and history for everyone to enjoy. 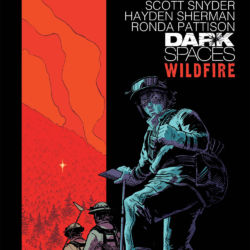 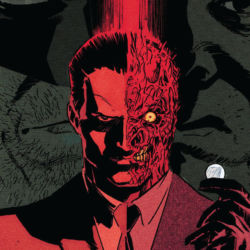 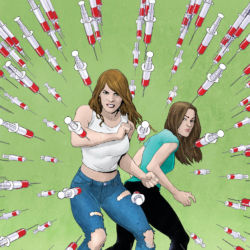