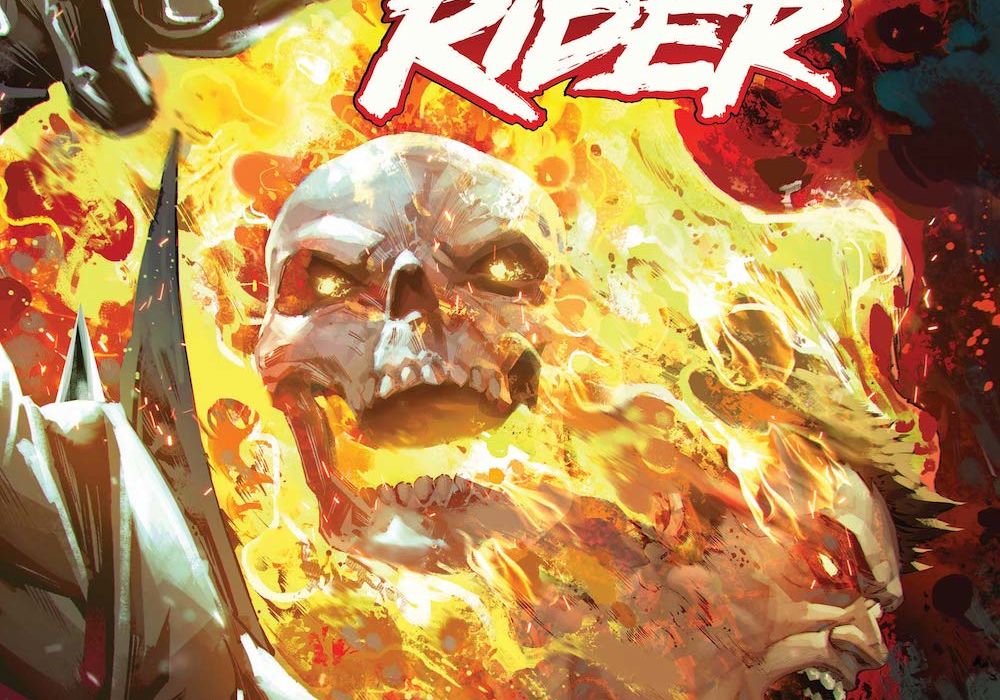 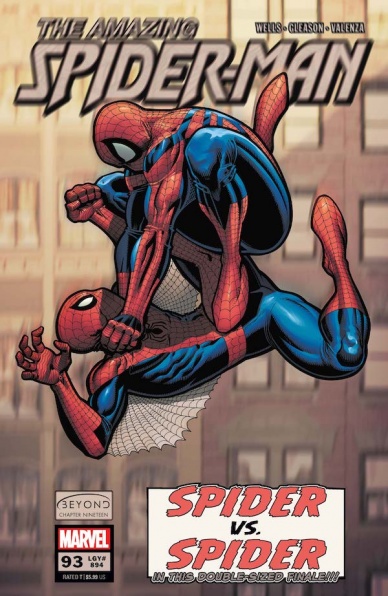 Marvel has been through lots of reshuffles with the Spider-Man property recently. This week Marvel is wrapping up their ‘Beyond’ initiative to prepare for Zeb Wells and John Romita Jr. to tackle the flagship Spider-Man series. Thankfully, Wells and artists Pichelli, Bagley, Townsend, and Gleason continue the trend from previous issues and keep that lovable, downbeat Spider-Man tone intact.

Wells and the ‘Beyond’ team of writers have kept the animosity between Peter and Ben alive for the entire ‘Beyond’ era. ”The Amazing Spider-Man” #93 continues the focused trend of those scripts and dives headfirst into the relationship between Peter and Ben. Wells highlights Ben’s insecurities really well in this chapter. Readers get a strong sense of the trauma holding Ben back in his life. Superhero comic books love the story trope of a character with similar powers who have different motivations. Readers can likely guess where this issue might start, but Wells and company keep readers guessing until the final page of the issue.

Patrick Gleason draws the main story chapter. Gleason slightly shifts his style to emulate Sara Pichelli’s work here. Gleason strays away from some of the more bombastic sequences to prioritize a grounded take. Gleason matches Pichelli’s panel borders and page composition with relative success here. Gleason’s facial work matches up with Pichelli’s art but doesn’t contain the breadth of emotion seen in her figures. Gleason draws excellent action between Peter and Ben by breaking up the motion into a few smaller panels here. Gleason’s art is confident and more streamlined as compared to previous works.

Mark Bagley and Tim Townsend’s art sneaks up on readers to recall elements of Stan Lee and John Romita Senior’s legendary work on the series. Bagley and Townsend focus on the romantic elements of Mary Jane and Peter’s relationship. This Bagley-drawn sequence looks visually generic due to the awkward figures. The tonal whiplash between the Sara Pichelli-inspired art throws off the issue as well. Sara Pichelli’s work is here beautiful. Pichelli’s facial expressions are extremely detailed. Pichelli is great at capturing the subtext that has been an important part of the ‘Beyond’ run of comic books.

Final Verdict: 8.0 – ”The Amazing Spider-Man” #93 successfully closes the ‘Beyond’ era of Spidey and starts to hype upcoming plot beats with grace. 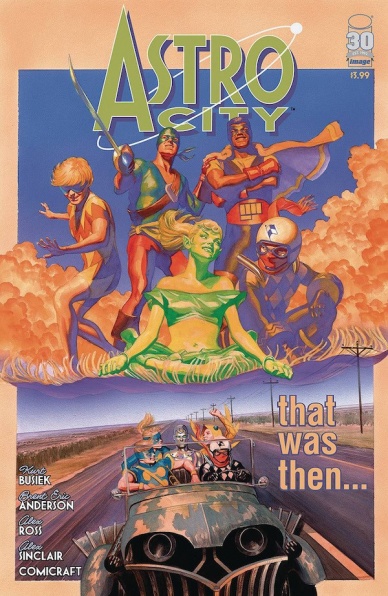 Astro City: That Was Then… Special #1
Written by Kurt Buisek
Illustrated by Brent Eric Anderson
Colored by Alex Sinclair
Lettered by Tyler Smith and Jimmy Bentacourt
Reviewed by Quinn Tassin

After over two years (!) without visiting this universe, “Astro City: That Was Then… Special” proves that this is a series that’s worth the wait. The things that make this special so beautiful and great are the same things that have made “Astro City” great since its first issue. The universe is easy to jump into but absolutely filled with life and lore. If you know, it maybe you get a little more out of reading but it’s plenty rich for a new reader. In general, the greatest strength is that everything that happens is grounded n the humanity of its characters.

This issue gives us a lovely, relatively contained coming of age superhero short. Exploring a now classic trope- tragedy striking a group of young heroes which in turn prompts the government to consider regulating heroics and the remaining teen heroes to do quite a bit of self reflection. Here, though, there are no line-wide ramifications or superhero wars to follow. Instead it’s some kids on a road trip trying to figure out what they want to do with their lives. They’re all traumatized because of what they do but their responses are all feel different in very real, justifiable ways. Most want to keep going, some because they have to, some because they think it’s right. Bugelette is happy for the adventures she’s had but has always dreamt of college and law school. Rivets also has the very nature of being a robot programmed as a teenager to think about. It’s all very emotionally compelling and the staging of just putting them all around a campfire to talk about their feelings works incredibly well.

The artwork is excellent. The brief flashes of action that we see are well executed but “Astro City: That Was Then… Special” involves a lot more sitting and hanging out than your average superhero comic. The colors are a bit more muted and realistic and really shine when showing off a Southwestern landscape. There are a ton of closeups on characters’ faces because the meat of the issue is emotional and the team does a great job at making that visually engaging. When you think about it, there’s real contrast between the visuals of teenagers in superhero costumes and deep emotional conversations around a campfire but you can’t even feel it when you read this issue.

Of course, it’s not all self-contained emotional conversations from the mid-20th century. There’s the ghosts of the deceased Jayhawks team sitting around waiting to show up in later “Astro City” stories. For now, though, there’s just a thoughtful, emotionally mature issue about growing up and figuring out your place in the world. 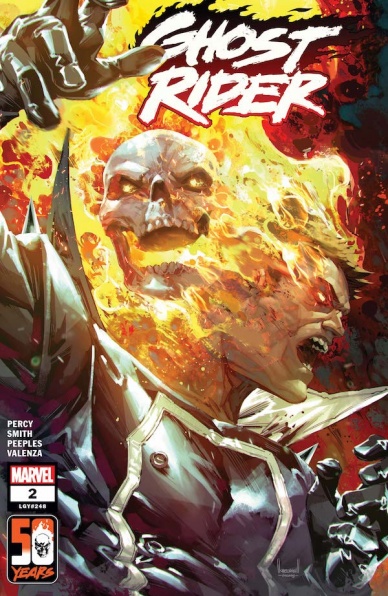 Benjamin Percy has a gift for keeping superpowered or supernatural characters, in this case, grounded and faced with more moral decisions while on their journeys of self-discovery. Johnny Blaze is the perfect example, as he’s still trying to make sense of the mirage-like hell that he just came out of and trying to figure out if he can balance life with Ghost Rider. This issue feels like the old-school Lou Ferrigno Incredible Hulk trope of a stranger going through towns and helping out the locals while just trying to make sense of their own life. Percy’s depiction of the person chasing Johnny also gives some much-needed depth to the entire story, as she is an agent for the FBI but possesses a secret of her own with visions of demons and Hell on Earth. The audience is given the basic level of why she is chasing Ghost Rider, but Percy has shown how much she pushes back with the FBI and bureaucracy to know that she may just be playing possum until she can strike to do her own thing.

This wouldn’t be a Ghost Rider story without a supernatural and borderline gory transformation sequence and monsters to fight against. The art team creates this all-around creepy vibe that fits well with this supernatural story because we follow a man who has a creepy hotel set-up like someone from Criminal Minds but with the motivation of someone from Supernatural. That scene starts with Johnny’s face literally melting off from the flame of the skull and then switches to a demonic altar for sacrificing people. Nearly every character has these deep lines around their faces and muscles that make the reader question whether they’re demons or perhaps just people who’ve never heard of lotion. It’s difficult to note who did what in this issue because of the size of the illustration team with inkers and illustrators, but it must be noted that their styles combined created a seamless transition from page to page.

Final Verdict: 7.5 – It is a fun read by seeing what Johnny is getting into while on his journey to get his memory back but it doesn’t move the needle too much in the overall storyline. It answers a couple of questions but still leaves plenty of stuff to be determined. 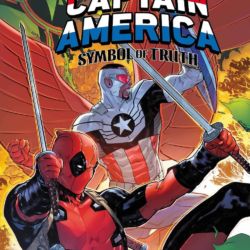 Wrapping Wednesday: Micro Reviews for the Week of 6/29/22 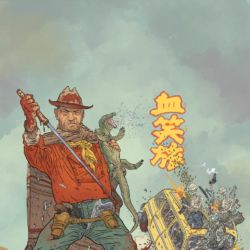 Wrapping Wednesday: Micro Reviews for the Week of 6/22/22 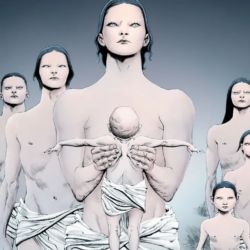 Wrapping Wednesday: Micro Reviews for the Week of 6/15/22