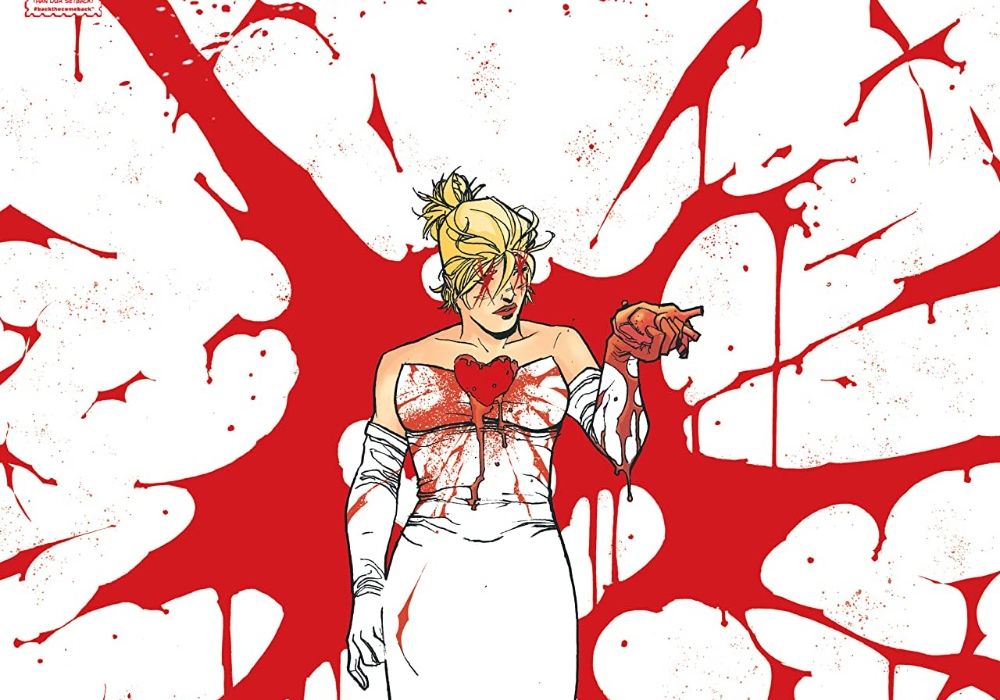 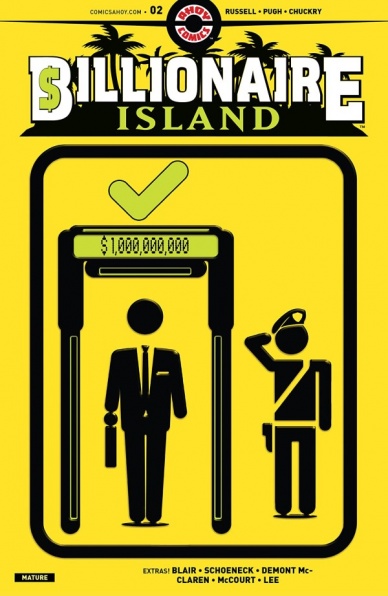 It’s weird to come back to “Billionaire Island” in July 2020. The book remains incisive and unrelenting in its criticism of the modern global capitalist machine and its hungry mouthpieces upon the Earth. It’s an angry book, focused on one aspect of a broken system in an exaggerated but, let’s be honest, barely so, environment. Yet, in these new times, as the virus lays bare and brings into stark relief issues of racial disparities in health care and wealth in ways that have always been there but never acknowledged so opening by white America, it’s hard not to look at “Billionaire Island” and go: this doesn’t go nearly far enough.

And Russell, at least I presume it’s him, says as much in the back pages of the book, citing this one gem as an example: the GOP stalled an emergency paid sick leave bill because apparently the oil companies didn’t like it.

The times one lives in invariably affects the way a piece of art is viewed and interpreted but it’s hard to judge “Billionaire Island” for the world literally shifting around its feet. No, “Billionaire Island” #2’s main problem is that the issue feels light. There isn’t much in the way of forwarding thrust, story-wise, merely more examples of systemic cruelty and situations that would be funny were they not so dire and true.

Pugh and Chuckry remain a stellar team, with the green-screen fight a perfect example of color and drawing working in tandem and playing to each’s strengths. Each scene itself is satisfying and has an arc that propels it forwards. However, once the final scene wraps rather anticlimactically, and one takes stock of “Billionaire Island #2,” it feels like more positioning rather than progression and the length of the final two scenes bears that out.

Perhaps my reticence is that the parts that were meant to be shocking or illustrative satire now feel like reflections of reality, thus denying the comic much of its thrust. Whatever the case, “Billionaire Island” #2 retains Russell’s wit, and the whole team’s clear narrative storytelling and issue #3 cannot come soon enough.

Final Verdict: 7.3 – Not the best second issue but still reflective of a series that stands head-and-shoulders above the rest. 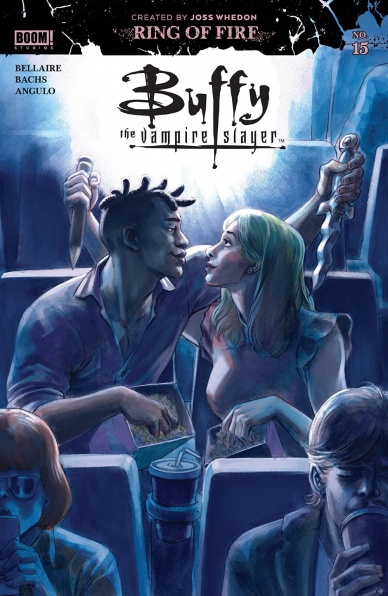 After the events of the ‘Hellmouth’ crossover, “Buffy the Vampire Slayer” has had a tough time finding a throughline to transition the series into a new direction. “Buffy the Vampire Slayer” #15 acknowledges some of the difficulties and tries to transition the title into a new direction with limited success. Writer Jordie Bellaire pairs Buffy with the supporting cast members of the series including Buffy’s ongoing romance with Robin. The ‘Hellmouth’ crossover was able to bring a lot of tension into the relationship between Robin and Buffy that felt fresh and unique. Unfortunately, the absence of key Buffy supporting cast members like Willow and Xander (until the end) means this issue has a huge uphill battle to climb.

Seeing Buffy struggle to protect her friends always makes her seem incredibly noble. Also, I really enjoy how the issue psycho-analyzes Buffy while being a comic that brings plenty of action and conflict to the table. Even though some of the relationships Bellaire establishes between supporting characters can seem pretty shallow, the writing makes up for it in the complicated romance between Robin and Buffy. A huge saving grace for me was the last couple of pages in the issue. Bellaire has teased a huge shift regarding a key supporting character for several issues now that comes to fruition in the last couple of pages in the issue.

The comic also takes a huge artistic shift with artist Ramon Bachs illustrating the issue. The art is a fairly radical shift from previous series artists David Lopez and Dan Mora. The pencils are not as detailed-oriented and precise as the past artists. Some of the character proportions are exaggerated to a point that disconnects me from the story. Buffy is portrayed as razor-thin in the issue which doesn’t account for the muscle she has built up from tireless slaying. Bachs is really confident with some of the facial expressions which really helps Bellaire’s script in certain moments. The key aspects where the art has room to improve are definitely the more dramatic character interactions in the issue. The issue carries a few important scenes for supporting cast members that almost come off as parody with how they are depicted in the art.

Final Verdict: 6.0 – “Buffy the Vampire Slayer” #15 is a passable issue that feels like it is on the cusp of transitioning into a bold comic book again. 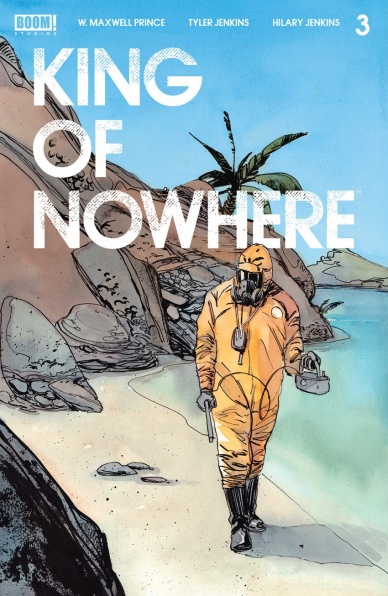 A lot of the time when I read comics, I think a ton about how I would adapt a story into a movie or tv show. Most of the time it’s a pretty easy exercise. With W. Maxwell Prince’s “The King of Nowhere,” it’s nearly impossible and that’s a great thing. This is a comic that could only be a comic. Issue 3 absolutely lives up two its two predecessors in that regard. It also serves as a strong escalation of the Coen-esque thriller that Prince has been building up. The whole endeavor- a deeply weird story that’s chilling and touching and original and banal all at once- is paying off in ways that are hard to enumerate (though it’s my job to try).

“The King of Nowhere #3” has a dreamlike tone that’s elevated by its art team. Tyler and Hillary Jenkins infuse the story with a beautiful haziness. They do stellar work oscillating between terrifying moments like the motel explosion and more simple ones like the bird-fish-boy returning home. With Prince, they show us a world that’s simultaneously vivid and vague; it feels full and layered and lived-in and alien. It’s kind of like a town you’re passing through on a road trip- a town with animal people, that is.

The best part of “The King of Nowhere #3” is easily its deep deep sense of humanity. We’re reading about mutants and animal/human hybrids but at its core, the characters whose story Prince and the Jenkinses are telling are deeply relatable. It’s like Bruce Springsteen recording a song written by They Might Be Giants and The Mountain Goats. That is to say, this is one hell of a book. 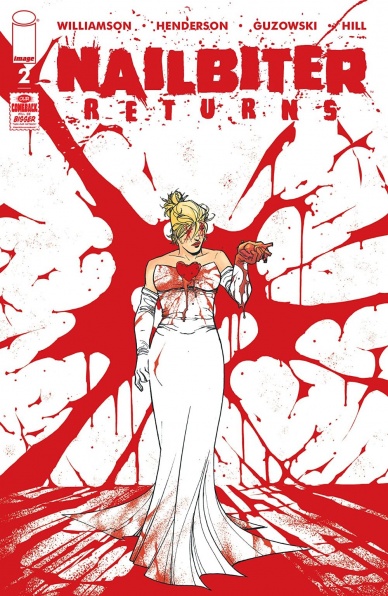 With “Nailbiter Returns” #2, Joshua Williamson continues to drive his narrative of the (seemingly former) serial killer central of Buckaroo into new, bizarre directions, even for a town that produced more than a dozen such killers on its own. This weirdness ranges from just plainly odd, as in the case of the shocking return of a seemingly dead central character; to humorous, as in said character’s apparently obviously false story of daring heroism; to disturbing, as in the bait-and-switch inherent in one of the bigger twists of “Nailbiter Returns” #2 itself. However, one thing all of the strangeness has in common is its ability to further a sense of mystery from the original series, taken to new, seemingly paranormal heights.

Mike Henderson hasn’t lost an ounce of his artistic talent since the end of the original “Nailbiter,” dropping right back in with highly animated visuals as much as intense, quieter emotional scenes. When the narration particularly hams up descriptions, Henderson creates scenes just as wild and out-there as likely exist in the speakers’ minds. As in the original series, his work on “Nailbiter Returns” #2 is especially potent in instances of gruesome, horrific imagery, from the appearance of killers to the acts of murder themselves, in a way that could even be mistaken for a comic book interpretation of one of the more brutal episodes of Hannibal.

Henderson’s talents are even further expanded upon by Adam Guzowski’s colors. The palettes used in present-day scenes showcase the events well enough, but the most creative use of hues and tones comes with flashbacks, both real and apparently imagined. In those, Guzowski utilizes a grayscale for almost everything, with the exception of violent elements such as hours of pools of blood or distant explosions. In doing so, he provides an added life while also making those same images appear almost surreal. 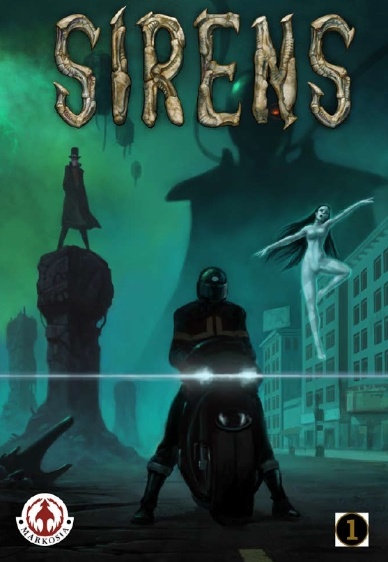 Sirens #1
Written and Illustrated by Steven A. Ross
Reviewed by Jodi Odgers

“Sirens” #1 throws the reader into the center of a conflict in a dimension that is far different from our own. Grotesque horrors stalk the land scattered with bizarre buildings. At the heart of this conflict is Rieve, an ostensibly ordinary man tossed head-first into this terrifying realm after a bike accident. The twisted art draws you in, but will the story hook you?

Steven A. Ross’ “Sirens” has an aesthetic that draws heavily from H. R. Giger. Everything from the forces of evil we see on the first page to the desolate architecture of the dimension wouldn’t be out of place in concept art for the next Alien spinoff. Ross’ ethereal art is most evocative in the still moments, whether it shows Rieve entranced by a nude figure dancing melancholically in the street, him gazing at his new surroundings from an outcrop or a gargantuan beast in the distance. Some images stayed with me long after putting “Sirens” #1 down.

Sadly, this cannot fully carry the weight of the writing. While the overarching plot is fairly imaginative and does set up future events, the dialogue is stodgy, Rieve doesn’t feel like a fully-realized character, and some story decisions don’t quite make sense, even in a budding narrative with time travel elements.

While some moments from “Sirens” #1 show glimpses of a fresh new take on the genre, the comic does not take this momentum in any meaningful way. Hopefully, future issues can realize this potential. 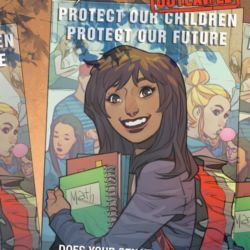 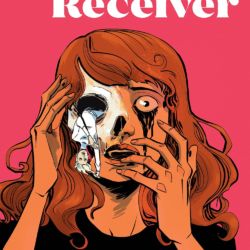 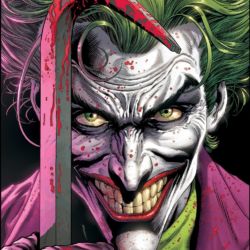