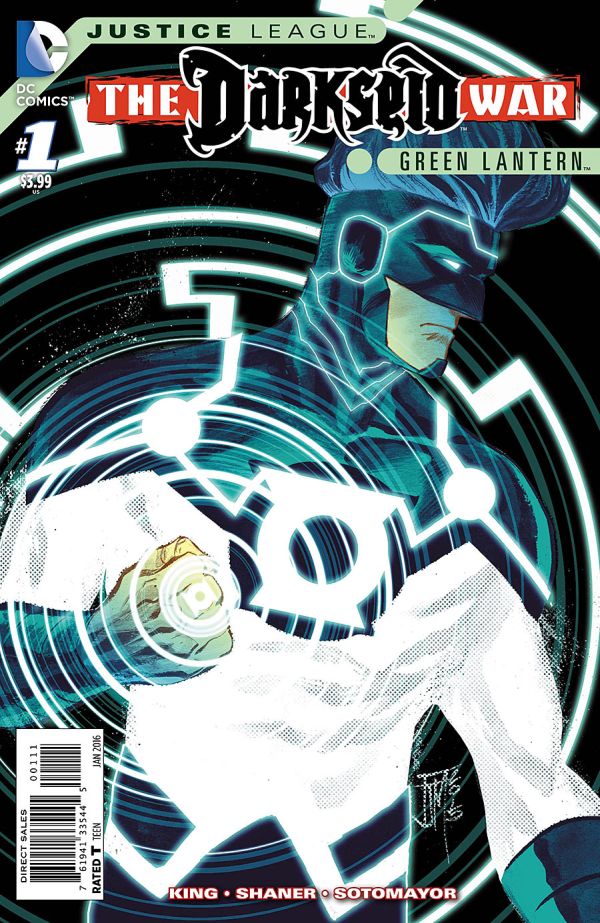 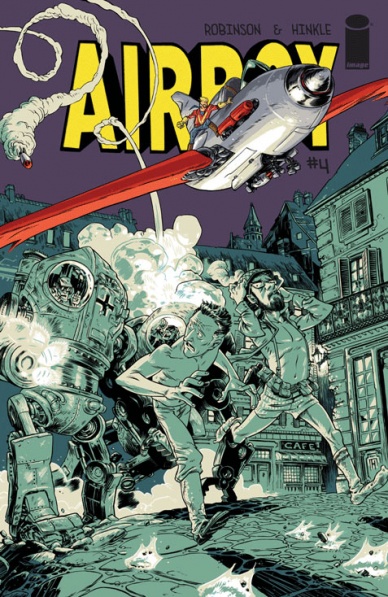 “Airboy” is a unique book in the sense that Airboy isn’t even the main focus of the book. Normally, that would be an odd sentence to say out loud, this time it is very fitting. Regardless of who the actual main character is, a heartfelt story at the core propels it to a high watermark.

The final issue puts James & Greg on a final mission to defeat the Nazis with Airboy and his crew. On the way to their target, James with Greg have a moment of reflection about where they have been. While neither is particularly proud of their actions, both are using this as a growing experience. James is not as convinced of his growth, in fact his self-loathing is at its peak. As the two ready their final assault, they both realize they need each other as much as they need themselves.

James Robinson really pulls no punches with this semi-fictional version of himself. He is a man who is burned out to the point of no return. Every time Robinson moves slightly forward, he finds new and exciting ways to crash further into the ground. On the flip side, Robinson uses Greg Hinkle as his non-existent moral compass. Hinkle is no angel either but at least he realize that and does not loath himself for it. Hinkle’s speech on the final pages sum up where Robinson was, where he is and where he can be. It is a very tender moment, almost therapeutic to a degree.

Hinkle handles the art and colors and like Robinson he doesn’t shy away from his portrayals. Since Hinkle and Robinson are the primary focus, Hinkle shows all the emotions these two are going through. The two are rendered in green, signifying their escape from their own reality. Due to their drug use throughout, Robinson has somewhat of a ghostly look. Hinkle is a man who needs to sleep for many hours to look less weathered. The world they are in is wildly detailed with European style buildings, WWII artillery and planes Airboy’s crew are flying. Everything is dense and vividly cartoony is a way that will evoke the stories of “Airboy” from years before.

In a lot of ways, “Airboy” is merely a framing device to let Robinson unleash his inner demons. While the story could have easily ended on a downer, the opposite is true. The bond made between Robinson & Hinkle is incredibly endearing. Easily, Hinkle could have walked away from Robinson to let him further self-destruct. But instead, he tells Robinson the truth, something is not used to hearing. What the future holds for Robinson remains to be seen, but it looks a lot brighter. Perhaps the phrase “flying high” now takes on a new meaning after this adventure of self-discovery.

Final Verdict: 8.1 – An excellent conclusion to one of the best mini-series of 2015. 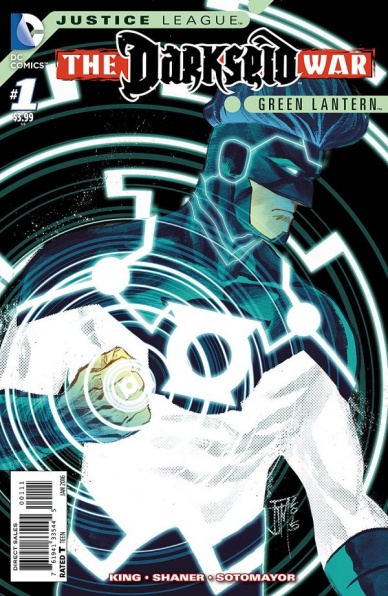 Simply put, this is one of the best Green Lantern comics of the past half decade.

Well, let’s start with the art. “Doc” Shaner is able to channel the entire history of the Green Lantern Corps, and yet bring all the disparate elements – Ch’p, Sinestro, Kilowog – together in a way that looks both unified and expansive. Shaner doesn’t limit the breadth of the universe, he brings it all under one roof. But where Shaner really shines is in the flashback scene of a young Hal in church, lighting a candle for his father. Young Hal is perfectly emotive – sad, angry, confused – and Shaner manages to take the script and elevate it by allowing Hal a range of emotions that you often times don’t see in a superhero comic.

Of course, none of this would be possible if not for Tom King’s script which, again, exceeds all expectations. King has crafted a story about what it means to wield the ring, as well as what it means to lose someone close to you. Hal is never really the everyman that so many superheroes are, because he’s a wildman. He’s a test pilot who jumps first and worries about the parachute later. For those of us that are more timid, we can aspire to be him, but rarely can relate to him.

King takes that and – by showing us Hal as a kid – suddenly makes him the most human he’s been in a very, very long time. King and Shaner work together like they’ve been paired for a decade (and please, someone, pair them for a decade!), and this book just drips authenticity, heart, and solid storytelling. Sure, is the theologian in me a little suspect of a few of the emotions granted to a god? Yes, but this is a story, and the fan in me is punching the theologian in me in the metaphysical face. This is a great comic, and deserves as much praise as it can be given.

Final Verdict: 9.0 – A stunning achievement, even if the title is unbelievably unruly. 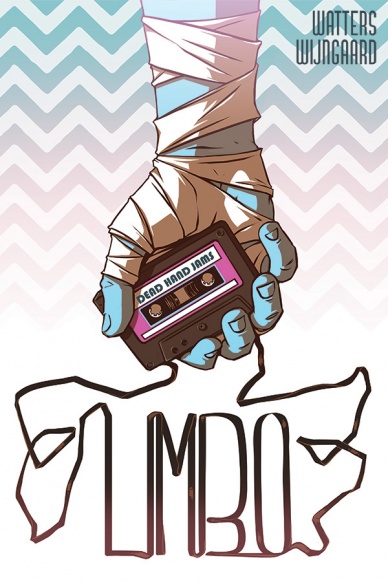 There’s can be little doubt that Image are the most exciting independent publisher in the game at the moment. While no small part of this accolade is due to the many heavy hitting series they’ve got on their roster at the moment (“Saga”, “The Walking Dead”, “East of West”, and “The Wicked + The Divine”, to name but a few) a huge nod must be made to their ability to sniff out truly captivating new stories and giving them a chance to run.

And if there’s one word I’d use to describe “Limbo”, Watters and Wijngaard’s near-perfect first issue, it’s ‘captivating’.

Drawing heavily on the instantly recognisable tropes of Noir, “Limbo” tells the story of Clay, an amnesiac PI in a backwater town who has been attempting to solve mundane crimes to pay the bills, and in hopes of triggering some kind of memory that might help him recall his place in the world.

On paper, the premise seems simple enough. Familiar, but nothing ground-breaking. But the world that Watters and Wijngaard have created is anything but ordinary. Watters leaps into the story with a dreamlike sense of gusto that keeps you deliciously confused as Clay tumbles from a drunken bar-brawl to a tense, narcotic-fuelled stake-out, by way of a nineties throwback-infused voodoo summoning.

Every one of Watters’ characters, from down on his luck Clay, to Femme Fatale Brigette, to un-fuck-with-able kingpin ‘The Thumb’, is a crime staple brilliantly realised. His scripting dances between earnest and self-aware, with Clays narration serving both as an anchor into this world and the shovel with which we dig into the dirt of this unfamiliar world.

Wijngaard brings both the characters and setting roaring to life with a palette of neon colours that add to the oneiric fluidity of this first issue. the nebulous town of Dedande draws from New Orleans, Mexico, Haiti, and a whole load of other places to create a beautifully amorphous amalgamation of every salacious, superstitious cartel-controlled city that’s ever been put to paper.

It’s Wijngaard’s brash colours, coupled with his heavy shadowing that gives this book its instantly defining tone. There’s a constant feeling of unease and mystique that suits the setting both as a crime book and as a book with a specific brand of tribal, earthy magic. Every page of this issue is a sequential artist’s dream, with Wijngaard’s ability to pace and unfold a story through visuals leaving Watters free to wax lyrical in Clay’s charismatic, introverted voice.

This is a master class of a first issue and any fan of books like ‘Southern Cross’, ‘Dead Letters’, or ‘Neverboy’ should be on this like a rash. And for anyone still unsure, the effortless tone, gorgeous visuals, and compelling story should soon sort that out.

Final Verdict: 9.5 – Everything I could ask for from a first issue and more. 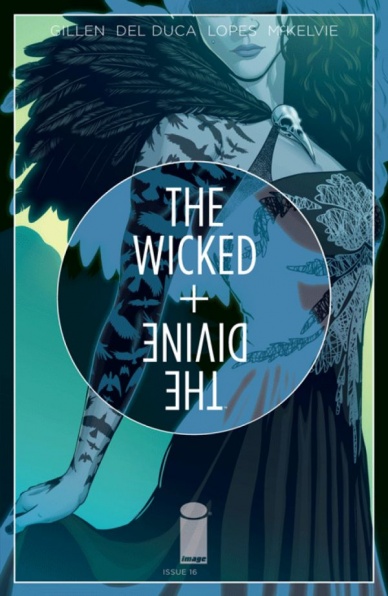 More than anything, “The Wicked + The Divine” #16 proves Leila del Duca is capable of drawing anything. This issue, which tells the Morrigan and Baphomet’s backstory, is probably the most low-key and borderline realistic issue of anything this series has produced so far, and it sort of feels like it’s the most personal issue of this series yet.

The Morrigan and Baphomet are Marian and Cameron, two friends who role play as tragic Victorian vampire figures and fuck around on the side. Their life is dull, quiet, like they just stepped out of The Casual Vacancy rather than the Wizarding World. They feel like real friends, brought together by being outcasts. And then Ananke shows up and gives Marian Morrigan powers. And she leaves Cameron behind.

Gillen maybe could have spent some more time expanding the section where Cameron pines after The Morrigan and what she became, because there’s a real truth to the character who’s been left behind while everyone he knows accomplishes greater things. But the scenes Gillen does devote to this, and the way del Duca illustrates it, are remarkable and practically heartbreaking.

Del Duca keeps it simple, focusing on expressions and emotions. Cameron and Marian’s body language, in particular, is worth noting in this issue. Even when Marian is imbibed with Morrigan powers, del Duca maintains the solemn tone. The issue breeds a genuine melancholy that counteracts nicely with the characters’ last efforts to cling to their old adolescent angst.

Does a lot happen here to develop the plot? Not really. Are there exciting super-being showdowns with brand new revelations being made? No. But does it achieve a sort of emotional resonance and melancholy vibe that obviously comes from some level of personal experience? Most definitely. It’s a quiet little issue that tells a great short story.

Final Verdict: 7.8 – Leila del Duca and Kieron Gillen get some true emotion out of this melancholy episode. 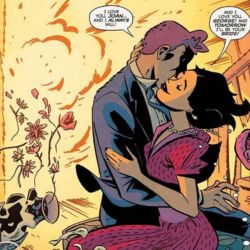 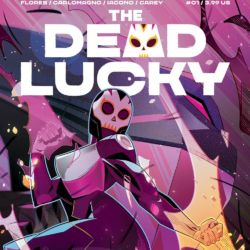 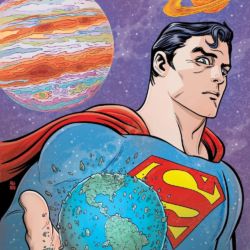