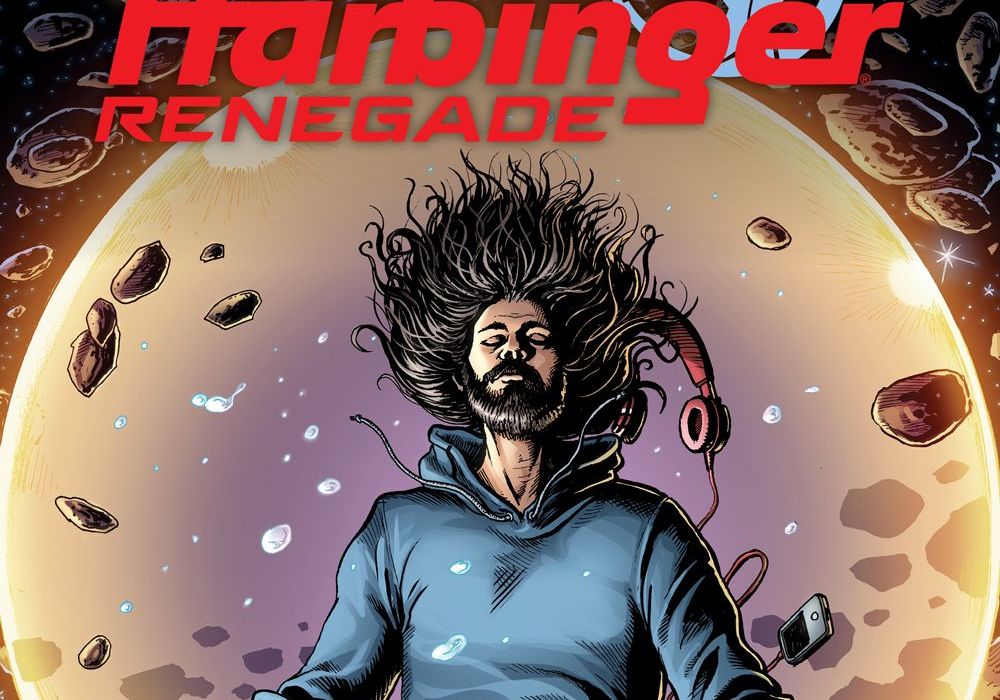 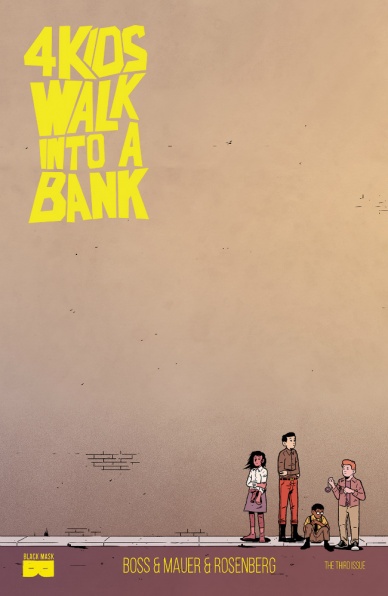 Few comics have as strong a sense of rhythm as “4 Kids Walk into a Bank”, and that’s most definitely evident in “4 Kids Walk into a Bank” #3. By maintaining a fairly strict grid layout, creators Matthew Rosenberg and Tyler Boss have successfully produced a comic that’s both hysterical and intense. The level of control over this book is something to admire, though I don’t think we’ll be able to see the full extent of its effectiveness until the story is finished and completed.

Because when a book is so well crafted and executed, when the creative team understands and trusts each other, when the visuals are so crisp and readable, when the characters are well established and act consistently within their characterization, when the pace is so finely tuned you don’t want to turn away until you’ve finished the thing, every little stumble rings glaringly loudly. I think what hurts “4 Kids Walk into a Bank” #3 the most. at this moment, is that it isn’t really made for serialization. The characters do make a few steps forward in the plot and there’s a strong collection of various scenes. I laughed fairly hard while Paige was scoping out the bank: Frank Abagnale she is not; also, the scene in the boy’s bathroom is just perfectly executed. Yet, I didn’t feel like there was any build-up or come-down in this particular issue. There wasn’t a single goal they were going for or an obstacle for them to overcome rather than a series of preparations before the inevitable cliffhanger.

Make no mistake, I think “4 Kids Walk into a Bank” #2 is a very strong and well-delivered comic. Rosenberg and Boss have a firm grip on their characters, tone, and plot, and it’s definitely a world worth reading about. But it feels more like a chapter than an issue; this will read even better when it’s finished. 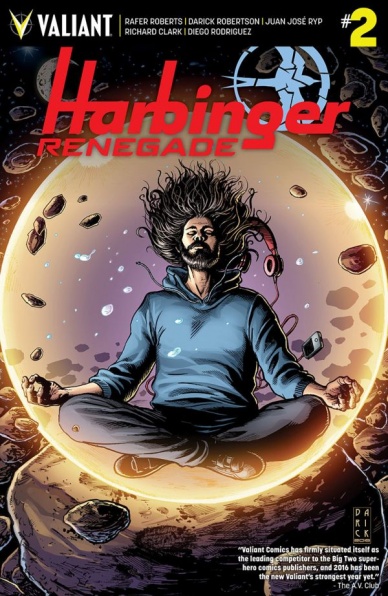 Roberts, Robertson and Ryp continue a steady pace at rebuilding the Psiot corner of the Valiant Universe. This issue gives us a bit more insight into Alexander Solomon, the one-time student of Toyo Harada. before he went rogue. His past frustrations with Toyo, his charisma, and his ruthlessness is all on display here. We also get into the head of Peter Stanchek after spending months in space, detoxing alone with his guilt over the deaths of Joe and Charlene in the previous series. Peter was left in a very bad place after “Omegas” and the creative team show that both in word and in imagery as we see Peter’s mind metaphorically and physically break.

Speaking of such psychedelic scenes, that is where Robertson’s art really thrives. Robertson, Richard Clark and Diego Rodriguez utilize paneling in such a sharp and fun (you know, in that “let’s watch a 20-year old’s self hatred and survivor guilt break him emotionally”-type way) way that really gets the story going. I say that, because when the book is more at rest, the art looks way more stiff and characters look expressionless at times. It isn’t bad, but you can clearly see the art team having a lot more fun the weirder this book gets.

Final Verdict: 7.0- The book is taking its time, but it has potential. 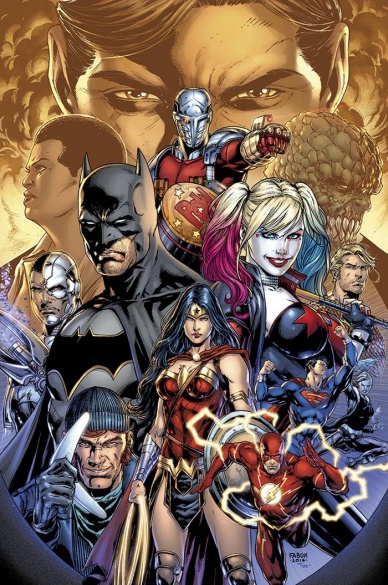 After all the complaining I do about Marvel’s many hero vs hero events, it’s nice to be reminded that DC can be just as bad about it. DC has managed to do hero conflicts well enough in the past, but all those had a proper setup and buildup. “Justice League vs. Suicide Squad” #1, it seems, really just exists to capitalize on the “Suicide Squad” movie and continue the buildup for the “Justice League” movie.

Still, the good things come first, as credit must be given where credit is due. The comic looks very nice, thanks to Jason Fabok’s artwork. I love the shading he uses on the characters, the scenic backgrounds, and the excellent illustrations that went into the combat. The character designs are all solid, and overall the comic looks great.

Where it falls apart is the story, and to be fair to Joshua Williamson, he does his best to make the conflict as natural as it can be. Batman was recently given cause to learn about the Suicide Squad’s existence, and it makes sense that he’d take that information to the Justice League. Even the two teams crossing paths comes at a good moment, allowing each side to do what they do best. But even after both sides have helped save the day, the League immediately goes into “Now come with us or we’re gonna fight,” and Amanda Waller goes straight to “Yeah, go and fight those superheroes, that worked out so well the last time I tried getting a team to do that.”

And even then, the fight is already doomed to end in a team-up, as a third unrelated team is getting put together, containing bad guys even worse than the Suicide Squad. (Because, y’know, why give a team of criminals compelling reasons to do good against their worst instincts when you can just throw even badder baddies at them?) At the very least, this new team contains characters I like, including one villain who I’m pleased to see return to the DC Rebirth universe.

Yet at the same time, that character’s return raises even more questions, particularly regarding post-Flashpoint continuity. Oh well.

Final Verdict: 6.2 – Lord help them they’re trying, but while it looks great, there’s just so many things that don’t work like they should. It’s fine if you want to shut your brain off and watch two teams go toe-to-toe, I suppose. 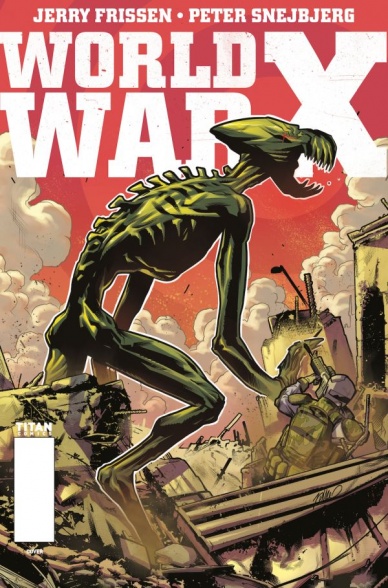 Some projects take longer than others to materialize; in March of 2015, we ran a teaser for “World War X,” a comic originally published in French, that would be debuting just a few weeks later. Well, I don’t know what happened, but 18 months later, issue #1 finally hit the stands. I had almost entirely forgotten about the series, despite being a pretty huge Peter Snejbjerg fan.

Well, the series is finally here, and I can say that, while it might not be totally worth the 18 month wait, the first issue is pretty damn good. The cover price is worth it just for Snejnbjerg’s artwork, which evokes classic sci-fi as much as it does his prior work. The opening, mostly silent, sequence feels very akin to his work on “B.P.R.D.,” with some very detailed, yet uncomplicated, scenes that perfectly tell the story without relying on dialogue. Snejbjerg’s characters go from walking through their daily lives to ‘holy fuck, a giant alien’ pretty quickly, and his masterful facial work really hammers that shock home.

The overall plot is still a little skeletal, as the issue wastes little time with backstory, but that’s a wonderful thing in our so often decompressed world. Frissen’s script jumps across centuries, between the moon and Earth, and across various areas of classified knowledge, from grunts in the field, to folks with high security clearance, to the President of the United States. The book moves at quite a brisk pace, and keeps the focus shifting, but never loses the thread. 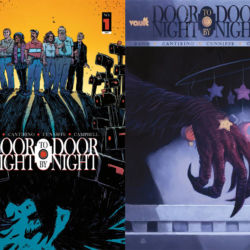 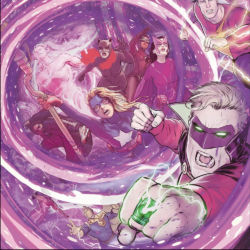