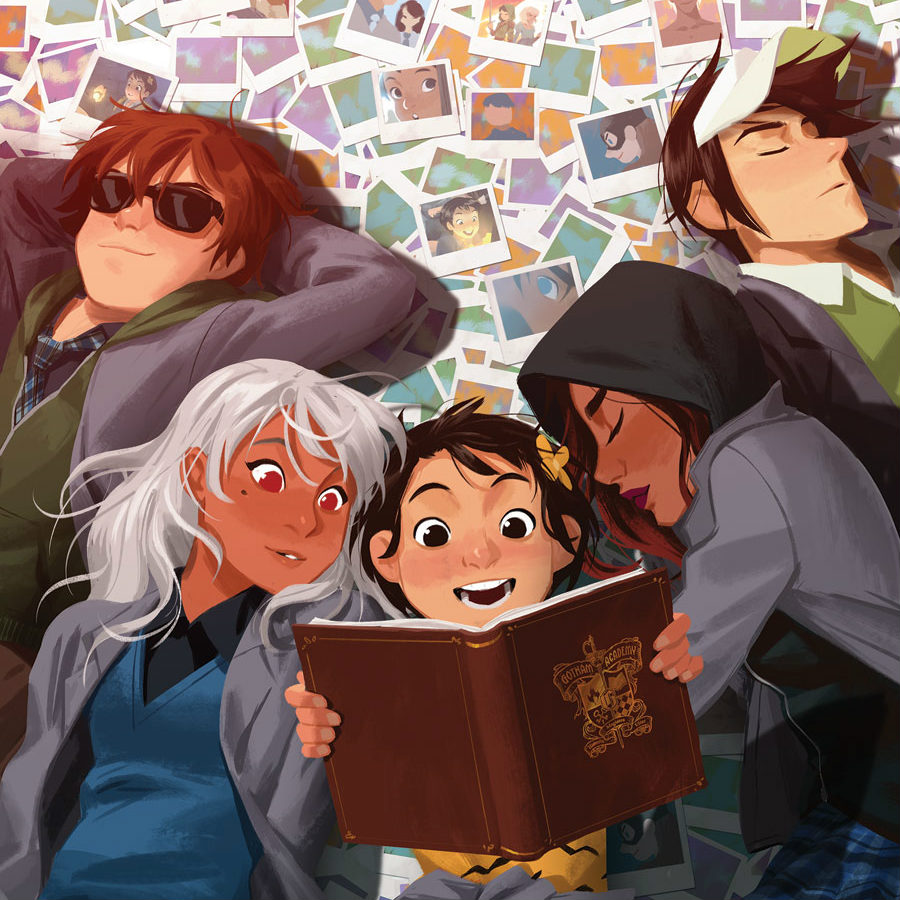 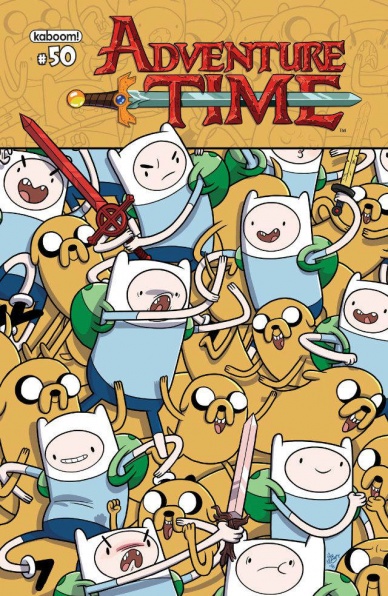 For its fiftieth issue, “Adventure Time” embraces elements of a latter day episode of the show. Balancing existential conundrums with its cautiously optimistic attitude, Christopher Hastings and Ian McGinty prove again that this series yields plenty of material to talk about in new and exciting ways.

Long ago, the great hero Billy conquered a form of the Lich and trapped its essence in an evil tree. Many years later, Finn and Jake discover this place and accidentally unleash a contained form of that evil on themselves. What follows is a hallucinogenic trip through Finn’s past selves (or alternate selves, in the case of Davey).

McGinty, who’s taking over from Zachary Starling, is great at big expressions. Scenes like the Ice King bursting out of his constraints are exciting and booming. He also delivers some clever transition work, along with colorist Maartha Laiho, as they gradient fade in and out of the memories and flashbacks.

This issue fully embraces a lot of the set up and themes of the show. The show hasn’t been afraid to pose existential questions or dilemmas for our plucky hero, and Finn faces the same questions here as the Lich Essence or whatever tries to force him to be him in all his incarnations. Hastings and McGinty don’t lose themselves in the existential elements either and, like the series, balance the deeper conundrums with a lot of goofy humor, ridonkulous dialogue, and bright visuals.

Hastings has been on this series for over a year already (dang, yo) and he’s helped shape “Adventure Time” into something his own while still honoring the show. And McGinty, even while having to follow the style guide, produces some nice moments of cartoon action and imagination.

Final Verdict: 8.1 – “Adventure Time” #50 confronts big, broad topics but does so with a playfulness, charm, and energy that make it as enjoyable and profound as ever. 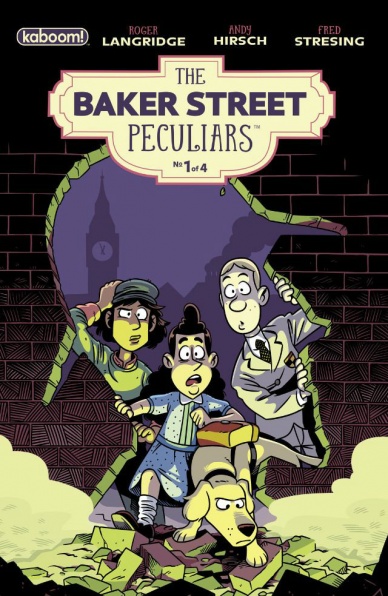 Langridge and Hirsch deliver an action-packed, fun-filled romp through 1930’s London that feels both in keeping with the pulpy strips of the time and thoroughly modern.

Langridge’s script centres around four unlikely heroes, (or, to be more precise, two heroines, a hero, and a dog) as they cross paths while tracking a mysteriously mobile marble lion making its way through London one evening. These three pre-teen detectives are full of moxie, guts, pluck, and all manner of ’30’s jargon for child-like cheek and courage. Watching them interact with each other as they plough through beautifully rendered set-piece after set-piece feels fun and natural. Langridge is able to establish character traits with broad brush strokes – the fearless leader, the friendly heart of the group, and the bumbling but loveable comic relief all rear their heads in this first issue – without breaking the pace of the book, which kicks off at a gallop and doesn’t really slow down from there.

Hirsch is channelling the clean linework and expressive, cartoonish style of continental artists like Hergé and Peyo. The simplicity of his designs really works, and there’s a classic, almost goofy feel to his characterisation that is reminiscent of the pulpy weeklies that many comic enthusiasts grew up on. As previously mentioned, this first issue runs at pretty much breakneck speed past some of London’s most iconic landmarks. Hirsch manages to keep this almost 20 page chase sequence interesting by having his hapless heroes traverse up, down, under, over, and around numerous humorous obstacles, culminating in a fantastic full page spread that plays with the layout of an action scene and does full justice to the wacky, comedic feeling of the action throughout this book.

Kaboom, Boom comics’ ‘All-Ages’ imprint, might be most famous for its televisual properties (“Adventure Time”, “Bravest Warriors”, “Regular Show”, and “Clarence”, to name but a few), but it’s great to see them using the platform they’ve created to give lesser known properties a chance to blossom too. This fun-filled, modern take on the adventures of the world’s best known detective is a fantastic window into mystery comics for fans of all ages, and exactly the kind of thing I wish I’d been reading more of when I was a kid.

Final Verdict: 8.1 – Cor blimey, Guv’nor, I can’t wait to see what this peculiar lot get up to next month. 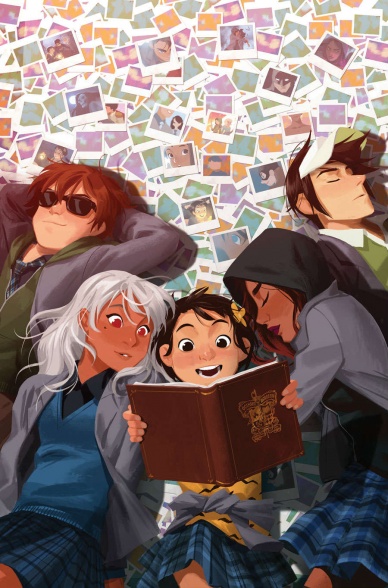 Let’s get one major thing out of the way: I love that cover by Mingjue Helen Chen. In a book that already had strong cover art game, this one takes the cake. The emotions that this cover evokes are what “Gotham Academy” is all about. It’s just a big ol’ shame with that garish Dawn of Justice advert bar on top throwing off the entire tone. Look, I get it. You got to promote Summerslam somehow, right? I’m fine with that. But my word, does it jar with an otherwise fantastic cover.

Speaking of the cover, the short stories in this issue of the “Yearbook” arc focus on the member of the Detective Club that is perhaps the breakout character of the series: Maps Mizoguchi. From the framing scenes by Fletcher/Archer featuring Damian to the story of Maps and Colton trying to get on the roof of Gotham Central to meet Batman (by Tynion/Wildgoose), to a story of a quiet Sunday at the Academy (Nimua), the stories show why Maps has really touched a lot of fans hearts.

One thing that really did stand out for me in Tynion/Wildgoose’s story is that Maps and Colton have developed a relationship (not romantic because isn’t it like 90% confirmed Colton is crushing on Kyle? Seriously who’s he think he’s ki-sorry, I’ll stop.) throughout the series. It’s been done with a very deft hand, this relationship of mentor and mentee in mischief and I like seeing this creative team continue it.

Nimura’s short story also shows that some of Maps’ traits can have a negative impact on those around her, and it even theorizes that she can get lonely pretty easily. Never done in a malicious way, and Nimura’s cartoon work here is able to convey a lot with a minimal amount of penciling.

When I reviewed the first issue of “Yearbook”, I did it with a heavy heart. A great deal of it had to do with my fears that the creative team switching to an anthology format so soon in the books lifespan was the chiming death toll for the series. That said, now that we know the series will return in DC Rebirth with “Gotham Academy: Second Semester”, I can take that weight off my neck and enjoy this stories for what they are.

Final Verdict: 8.1- Fun little stories showcasing one of the most adorable balls of adorable to ever….adorab? Adore? Eh, whatever, point being, it was pretty good. 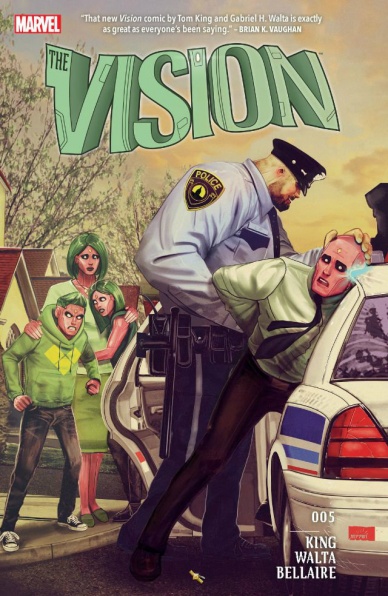 No comic on the shelves disturbs more than “The Vision.” Each issue is a quiet meditation on horrific acts, and no one exactly reacts to them – they just take them in and let the dread build. This issue is a slight change from that, as we see Virginia finally begin to show signs of damage from all that has happened to her since this series began.

King frames this issue in the words of Shakespeare and the words of a dead teenager. Vin is moved by Shylock’s words declaring his humanity, and Viv is moved by a yearbook quote. The sad reality of both turns of phrase is that neither of them are true for the Visions. If you prick them, they do not bleed. For them, it is not about the love – although I don’t know exactly what it is about. Order? Logic?

Walta’s work on the series continues to be unprecedented; he manages to convey so much emotion in robotic faces. A simple solution would be for the humans to over-emote, but that doesn’t happen either. The whole book is framed as a silent scream, with the tension building and building and building. Walta’s artwork could easily veer into the ridiculous or the heavy handed, but it never does. In fact, he has established the home life of the Vision, visually, so completely, that he has begun to look out of place fighting Giganto.

This issue also took stock of all the times the Vision saved the Earth, and gave Walta a chance to draw some of the big bads from Marvel history, showing his range as an artist. I sincerely hope he’s on this book for the full 12 issue run, and that he continues to work with King at some point in the future, as they are producing one of the best books in all of comics.

Final Verdict: 9.0 – A book that consistently impresses, while creeping us out.