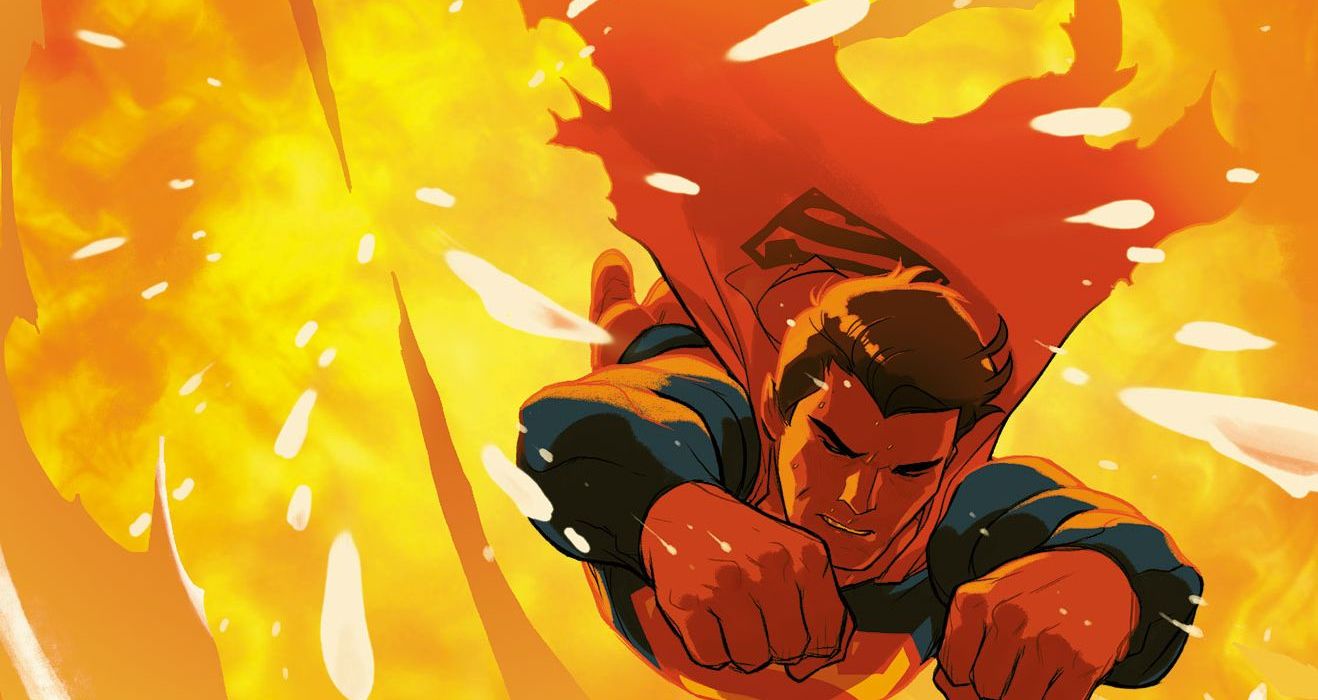 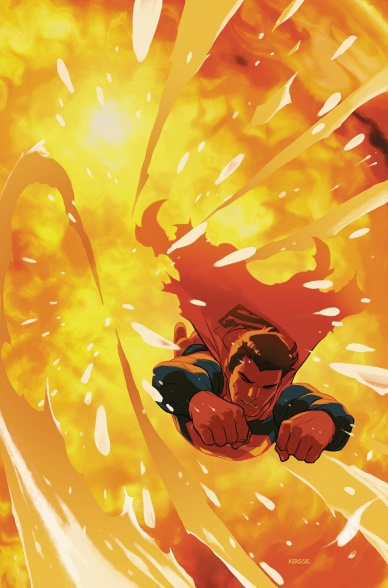 What was once called ‘Super League’ and is now called ‘The Last Days of Superman’ chugs on this week, with the third installment of the crossover bringing Supergirl into the mix, as well as expanding the role of ‘Clark Kent’ in this story. Tomasi has done a nice job culling together the various pieces of Super-stuff that worked in the New 52 and bringing them all under this tent for the final event. Supergirl has been one of the more consistent members of the Super cast since “Flashpoint,” but that fact often went unnoticed due to the fact that she bore little resemblance to the Supergirl of old.

Here, however, we don’t get a ton of Kara – sure, she’s on most pages, but she’s recapping stuff or listening to Clark recap stuff. Unfortunately, a lot of this could’ve been handled off-panel, but Tomasi, ever the editor, wants to make sure that all of the pieces line up and work in concert, so there’s a bit more exposition than necessary.

But there is also a lot of legwork being done here for ‘Rebirth’ – we’ve had glimpses of China, where we know Kenan Kong will be taking the mantle of Superman, we see Lois being heroic, we see the D.E.O. come into Supergirl’s life (much like how it is on Supergirl, etc. Tomasi is the perfect person to shepherd the books into this new place, and he does so nicely here.

Paul Pelletier handles the pencils for this issue, and he has been one of DC’s most consistent artists over the past couple of years. Here, he does what he does well, but the work looks a bit more rushed than usual – perhaps inker Sandra Hope Archer’s style wasn’t lining up with Pelletier quite as well as hoped, but the work looks a little less polished than what we’ve come to expect from Pelletier.

Final Verdict: 6.8 – A transitional issue in a transitional arc – hopefully the second act of stories has more action. 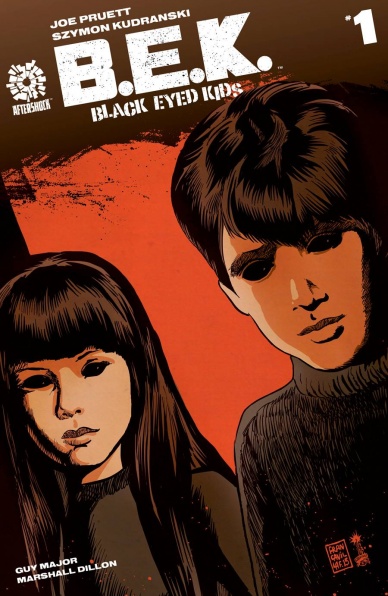 Great horror, as far as I’m concerned at least, is all about… anticipation. My opinion seems to be one shared by Pruett and Kudranski, who’s first issue of “Black-Eyed Kids” sets up a smartly simple – and very sinister – conceit that is a strong staple of the horror genre: Strange kids are super creepy, right?

Moody, atmospheric mid-west town? Check. Spooky new arrivals in town? Check. Troubled, sleepwalking teens? Check. A grisly, and unexplained murder? Double check. Pruett hits on a lot of solid horror tropes in the script for “BEK” #1. He sets up a wholesome nuclear family with a slightly strange secret, before revealing the enigmatic duo of the eponymous ‘kids’ as they glide through this small, sleepy town and start to stir up something dark and decidedly threatening. Pruett’s scripting is solid enough, and sets up quite a compelling mystery, although the individual voices of some of his supporting cast sound a little generic at times. He’s at his best with the terse, tense dialogue of the ‘kids’, which is, thankfully, kept to a minimum to allow for any scrap of script they say to pack a real punch.

I’m a sucker for a Francavilla cover, so I was always going to pick this first issue up, but the art on the inside doesn’t disappoint either. Kudranski manages to convey the creeping tenseness of a classic horrors like Village of the Damned and Children of the Corn. Rather than relying on gore or out and out scares, Kudranski’s dark, heavily shadowed, perma-night setting meters out spookiness in slow measures, a choice that means that the violence, when it comes, is even more visceral, even if the majority of it happens off panel.

This first issue gives very little away, offering up many more questions than concrete answers, but it does set up a mystery with a strong tone that feels like it could still go in any direction. Definitely worth a look for any fans of chills-up-the-spine style books. 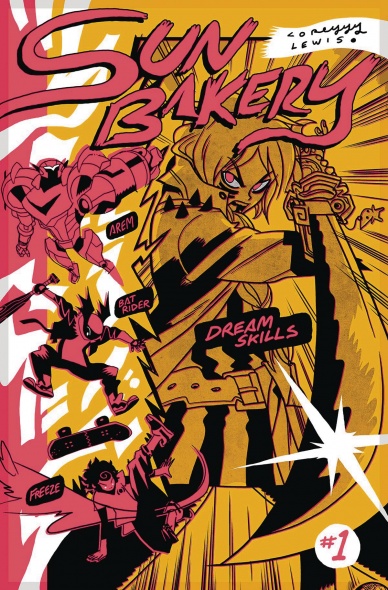 Brace yourself, because if you’re not already running by the time Corey Lewis’s “Sun Bakery” #1 starts, you’re going to get left behind. A comic book anthology born from a love of “Shonen Jump” magazine, this thing is fast, furious, and frenzied. In the afterword, Lewis says he’s a “pretty ADD when it comes to committing to one comic project”, and that energy and restlessness comes through on every single page of this book.

Compromised of three stories — ‘Arem’, ‘Dream Skills’, and ‘Bat Rider’ — with a promise of many more to come up, “Sun Bakery” wears its attitude on its sleeve. ‘Arem’ and ‘Bat Rider’ are essentially pure visual stories, the latter even constructed for mobile reading: the vertical panels keep it snappy and fast paced, with the taller image giving Lewis a chance to deliver some sick skateboarding tricks that defy gravity. ‘Arem’ takes the Star Trek exploration MO and gives it a millennial spin. You might not understand social media, but, Lewis points out, it’s just another way to explore and share our world, all while still getting in a whole mess of trouble.

The centerpiece, though, is ‘Dream Skills.’ Set in a world where the auras around people make it so they’re impervious to bullets, swords have come back in style as the overall weapon-of-choice. The story feels simultaneously well-realized and improvised, and there’s no telling which way it’s turning next. Lewis also has a blast re-appropriating icon sword images and stances, filtered through a punk-pink aesthetic, and it’s simply dope.

With it’s no-fucks attitude and restless energy, “Sun Bakery” #1 is an addicting collection. Lewis’s instincts on where to put the cliffhanger aren’t always the most effective — it never feels like, “Oh shit, what’s going to happen next?!” but more, “Huh, okay, guess it’s time for the next thing” — but I don’t think detracts from the vision of the rest of the stories. It’s messy and crazy and I hope it sticks around for a long, long time. 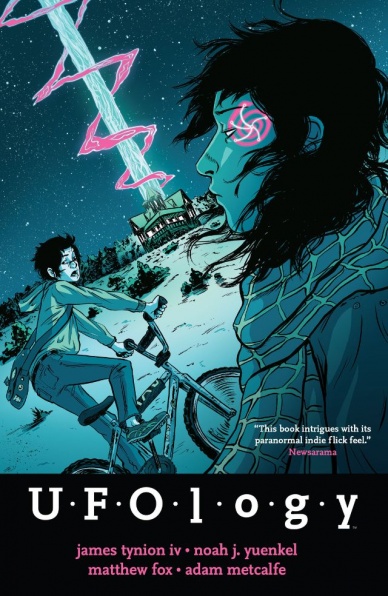 I remember when J.J. Abrams’ Super 8 and how it was marketed as the modern equivalent of essentially E.T. in so much as Abrams was a huge fan of Spielberg’s and wanted to use an alien story as the backdrop for a story that’s actually about a family coming together in the wake of a personal tragedy.

“UFOlogy” is like the more coherent version of that kind of story except it doesn’t descend into a bad knockoff of Cloverfield at the last minute. Instead, it remains wistful and charming and intriguing throughout thanks to Yuenkel and Tynion’s excellent cast of characters who represent the generations of extraterrestrial mystery surrounding a small town.

It’s a comic brought to magnificent life by Matthew Fox and colourist Adam Metcalfe. Fox’s linework is loose and inkheavy, but it brings a very handcrafted aesthetic to the book that’s essential to the heart of the story. This, combined with Colin Bell’s handwritten script for the lettering makes “UFOlogy” feel like a real indie comic.

Not just in the sense that’s not put out by Marvel or DC, but that this is a group of creators who know the story they want to tell and the handmade aesthetic that they want to capture. You can see and feel every brush stroke on the page and that makes it all the more pleasing to read. 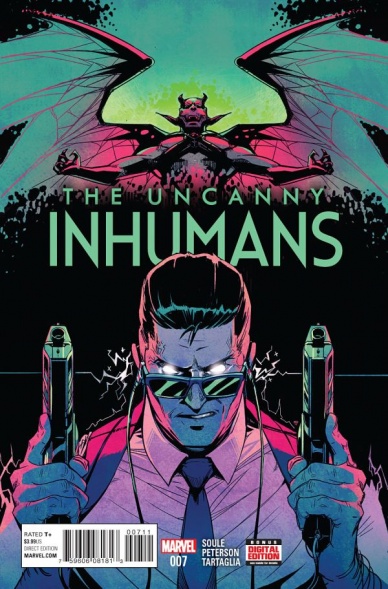 This book has left me in a great impasse. Listen, there’s no way to talk about it without discussing the whole stuff with the Marvel Cinematic Universe and the attempts to make Inhumans the next mutants. Now, I want to see the Inhumans in the MCU and see them flourish in the comics. But to that, you have to play to the franchise’s strengths, which -in my opinion- was always more of superpowered royal family drama dabbled with meditations on power and who wields it. There is potential for almost Shakespearian-esque tragicomedy in it.

Case in point: When this book plays to those strengths, I see the potential. That’s why when it’s an issue like this, for the most part it flounders. The focus is on Frank McGee a.k.a. Nur (also: again, they don’t need codenames. And drop that “NuHumans” nonsense) and he has the misfortune of being surrounded by more interesting characters. It was kind of the same problem that he had in the previous “Inhuman” series when he was partnered with Auran, who just by design alone she was more interesting. There was nothing bad about his parts in here, but when he is the focus, it feels very average.

To compound that, this book, for me at least, came alive at the last few pages with Black Bolt and Ahura because there is a great deal of tension between them. There’s as much more importance in what isn’t said as there is said out loud. We see the actions Ahura performs here from both of them. On one side is a young man trying to lash out at parents that he thinks don’t love him in ways he may think clever but is actually reckless. On the other is a man trying to understand his son and responding to his son’s actions with shock, anger and even a twinge of pride.

Brandon Peterson got to work with a great deal more action in this issue than his previous and it is good (make good use of them Manga Speed Lines). That said, his facial expressions feel stiff a great deal of the time. It does make for some unseemly and, at times, unintentionally funny moments. All in all with this arc, he didn’t do a bad job, but I would like to see how upcoming artist Kev Walker will do with this book.

Final Verdict: 6.0- When it’s allowed to be “Inhumans”, it’s pretty good, but when it’s not, it kind of struggles. 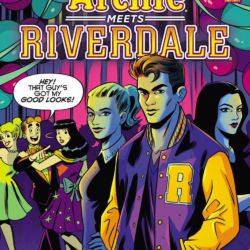 Wrapping Wednesday: Micro Reviews for the Week of 5/11/22 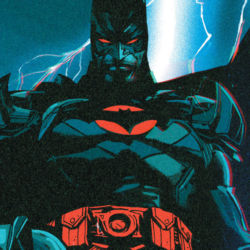 Wrapping Wednesday: Micro Reviews for the Week of 5/4/22 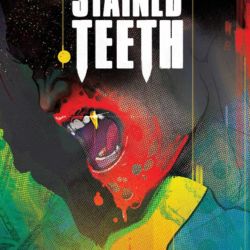 Wrapping Wednesday: Micro Reviews for the Week of 4/27/22