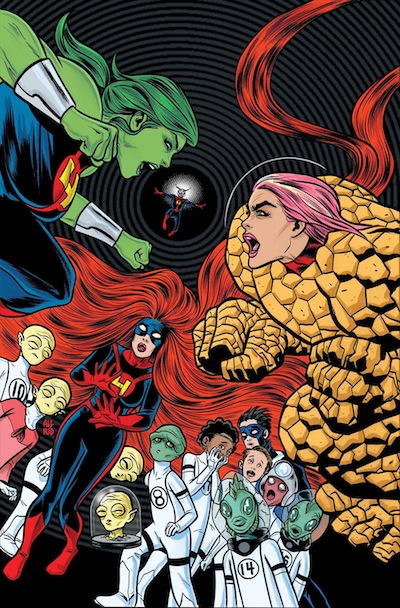 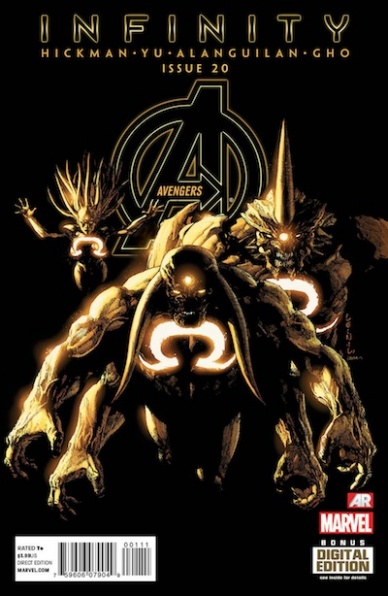 I can’t recall an event that felt larger than “Infinity,” and that is both the best and worst part of the crossover. The mini and the various “Avengers” tie-in issues feel like nothing else going on in comics right now, because the scope is just so huge. This isn’t just a cosmic crossover, it is seemingly re-writing the cosmos for the Marvel Universe. Big ideas are something that Yu and Hickman share an affinity for, and these pages burst with excess, but excess in a gloriously carefree way (that isn’t to say the tone is carefree, but rather their seemingly unblinking motivation to do what they want, no matter how many alien species are wiped out, is carefree). This event is firing on all cylinders, and while the scope can be intimidating, once you’re inside the event, it really works.

The sprawling Wild West opus continues with a reinvigorated fury in its sixth issue. In “East of West” #6, Hickman and Dragotta turn their attention toward ‘The Chosen,’ focusing on the turmoil and discontent growing within their ranks. We also learn more about just why it is that one should never mess with Texas. Temporarily allowing the conflict between Death and the other horsemen, the romance that has been building, the knowledge that The Chosen have abducted Death’s son and the fact that the world is ending to simmer for a moment (in the world’s largest plot thread pot, I am assuming); the team introduces an entirely new set of troubles, and adds another layer to the intricate architecture of this high-stakes, high-tech cowboys and Indians tale. A visual smorgasborg that brings forward political intrigue, personal strife and really awesome monsters, this issue is another strong offering from the team. Dragotta’s masterful character design continues to dazzle here, with the introduction of Texan judge who is at once a caricature of fat cat corruption and uncomfortably realistic and recognizable. Deftly capturing the passion and terror throughout this issue, he remains a strong visual voice. Dragotta and Hickman have an uncanny ability to find heart in the most unlikely moments, the one that stands out in issue #6, to me at least, involves a robot puppy and it’s loyalty to it’s master. Unpredictable and ferocious, tender but unrelenting, this title is like nothing else on shelves.

Final Verdict: 8.8 – Put on your ten-gallon thinking hat and go try this out. 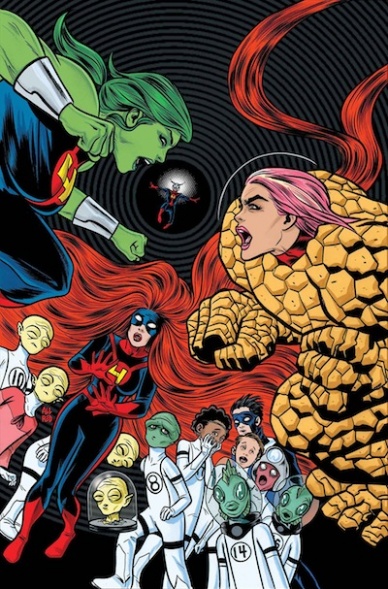 This is a tricky release, because “FF” is decidedly a book that was critically acclaimed due to the mind-melding of the creative team. The book was clearly one-part Fraction and two-parts Allred in a fashion that proved how fun comics can be, and there was a risk that that could be all lost. However, with the first Fraction-less issue of the run, all that has been proven is that the book’s fun and energetic style can still be well maintained without him. A little bit of the charm is missing certainly, as the rhythm and various cadences in Fraction’s writing is certainly absent, but it’s not necessarily a bad thing. The Allreds have done “Madman” for years in the same ginchy style that “FF” ultimately sought to imitate, so with a third Allred on board now the flow is kept overall — so it’s easy to say that if you liked what came before and you liked the Allred’s seminal work, you’re still going to love the charm and wit of “FF.”

And people thought it would taper off without Fraction on the book anymore! Puh-leeze. 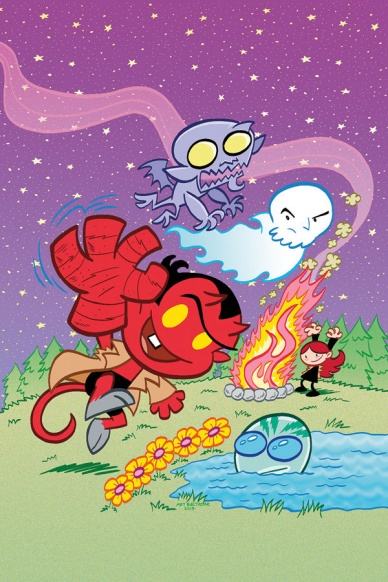 We usually cover all the Mignola-associated books as part of Mignolaversity, but we feared that it would turn into something that wasn’t true to the critical nature of the column if we covered “Itty Bitty” each month. There is just no way to say how fun and great this is each month without getting super-repetitive. Baltazar’s designs capture the characters perfectly, and he and Franco manage to put them in situations that work both for the Itty Bitty nature, but also seem shockingly true to the B.P.R.D. roots. This month: searching for a (sa)sqautch! 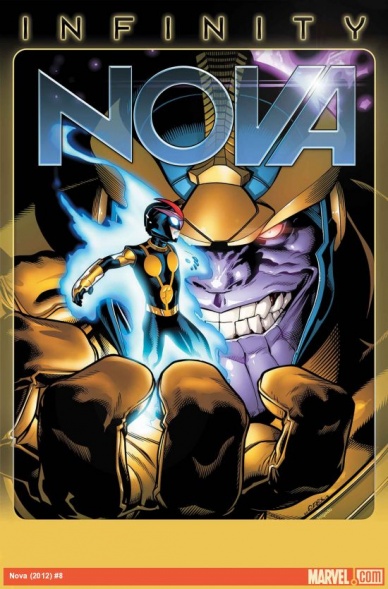 This book continues to be a book I enjoy quite a bit, especially when it’s really just focusing on Sam Alexander as a neophyte hero trying to figure out his way. Getting pissed and taking off his helmet mid-flight for not listening? YES! Dealing with Speedball and Justice recruiting him? YES! Secret identity stuff? YES! Everything tied into Infinity? No, sadly. The daughter of one of the Cull Obsidian that comes after him is about as generic as you can get (besides sleeping inside of some sort of space cow electively, like Luke Skywalker), and the Thanos everything falls a bit flat (especially considering how much they continue to dance around the fate of Richard Rider). Paco Medina’s art is a bit more up-and-down than usual, but really, let’s get this book back to the basics. Young hero finding his way = yes. Infinity = no.

Final Verdict: 7.0 – Tie-ins are not the way for Sam Alexander 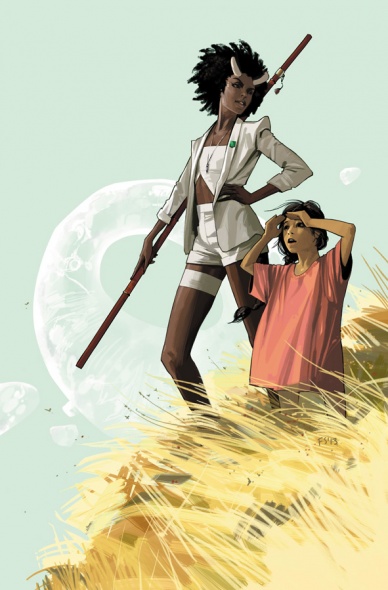 2013 has been a weird year for the vaunted mega hit that is Saga. It’s been cleaning up the awards, surely, but it also had a huge gap in releases and it also has been…a little down in quality. Still great, just not Saga great. That’s always subject to change, and change it does with this issue that finds us on a path back towards greatness. This issue, like many of them, finds the transcendently great Fiona Staples making her presence felt, as her art is alternately powerful and energetic and wonderfully ethereal and otherworldly. Her work is the – forgive me – staple of this book, as BKV jets us along from plot point to plot point. BKV had a resurgent issue, however, and the budding relationship between Klara and D. Oswald Heist is touching, and Hazel’s omnipresent narration continues to push this book into wonderfully touching levels. A great book that is getting on its feet again.

Final Verdict: 8.8 – We got the Seal kid and the Walrus horse again! 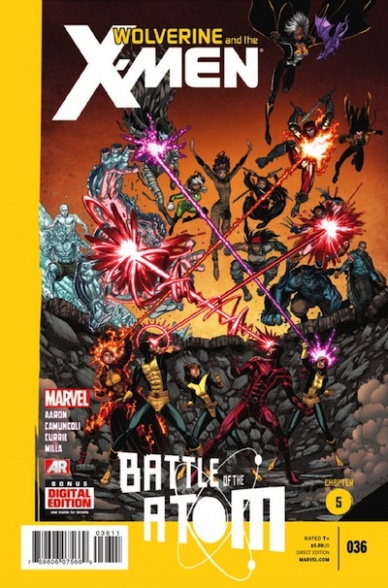 “Battle of the Atom” continues to be a rather enjoyable event marred only by the slightest flaws in logic, considering how everyone who wants the young X-Men to stay have literally no concept of spacetime. Aside from that, this issue is filled with wonderfully drawn battles (Psychic fight can still be cool even when they’re just standing around) and great characterization, especially Future! Deadpool who has the single best line in the issue. With Aaron now on “Battle of the Atom”, it’s continuing to be the fun event we were promised even with some characters’ rampant cases of “Event Delusion.” That said, it’s a little disappointing to have this crossover cut into Aaron’s storyline, but it’s enjoyable enough.

Final Verdict: 7.8 – Buy! If you’re already into the event. Pass if you’re just a Wolverine and the X-Men reader.