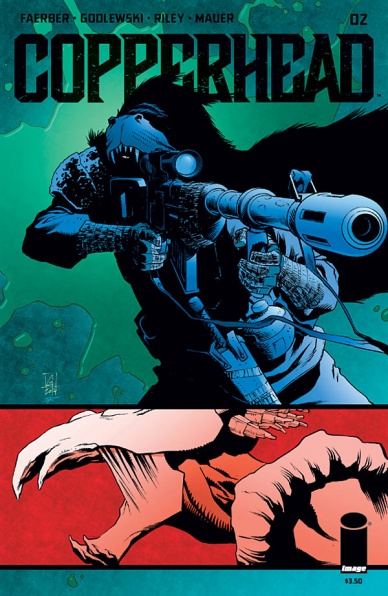 This series is shaping up to be a slow burn. There’s not a lot of plot development in this issue; it’s mostly world building with a sprinkle of intrigue. And you know what? I’m ok with that, because I trust Faeber to deliver. His past work has repeatedly proven that stories he writes has legs and ages gracefully.

While you and I are enjoying the building suspense and waiting for the inevitable excitement, we can thoroughly enjoy GODLEWSKI’s artwork, which calls to mind Pia Guerra’s work on “Y: The Last Man.” His work is enhanced by Ron Riley’s colors, which really sells the sci-fi western mood “Copperhead” is aiming for. 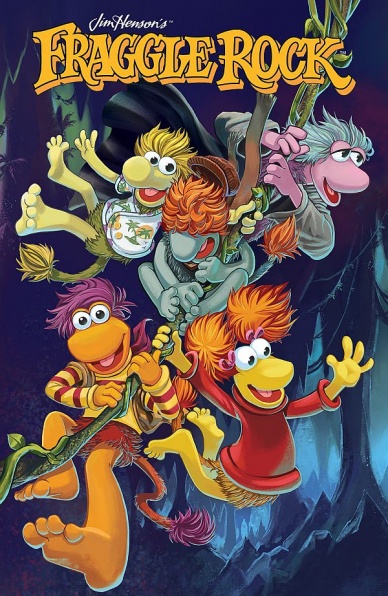 I didn’t watch Fraggle Rock as a kid. The first time I ever saw an episode was a three years ago, when I was 26. Watching it as an adult, this show was amazing. The character development and continuity would rival Avatar: The Last Airbender. Previous “Fraggle Rock” comics have either been straight up adaptations or short stories with generic characterizations. This promised to be a new, long-form story and I had high expectations (despite the premise sounding suspiciously like a Season 2 plotline).

The actual product was…just ok. It respected the source material well enough, and Myler managed to recreate the life-filled setting marvelously, but “Fraggle Rock: Journey to the Everspring” #1 was nothing special. In fact, there was barely enough story here to really judge. The whole issue can be summed up as “The water runs dry, so they decide to look for more.” This 20 page story could easily have been 2 pages. For $3.99, there should have been a lot more here.

It’s also not clear who the comic’s target audience is. The show hasn’t been on TV for quite a while, so there are very few kids who would even know what a fraggle is, let alone want to read about one. The story line is too base and expository to be for an older fan. Maybe Boom! thinks there’s a huge market of Fraggle Rock-raised parents who will find their way into a comic shop and blindly buy this for their kids?

Final Verdict: 4.0 – For the cost of this miniseries, you could probably buy the first season… 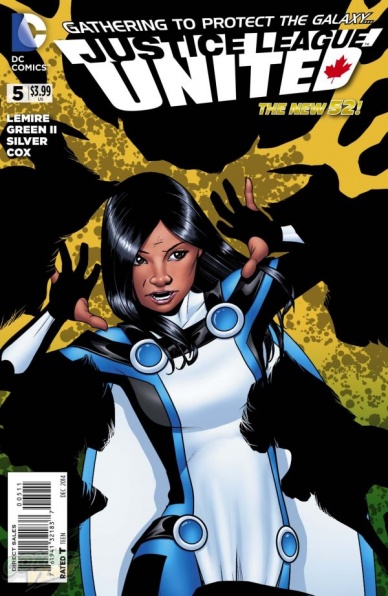 This issue acts as a proper introduction to Equinox, the new character created by Lemire for the series, and gives both the reader a chance to develop and affinity for the character and Lemire to get out a lot of the ideas that maybe didn’t fit in prior issues (like the fact that her powers change with the seasons). A good 2/3 of the issue is her story, and while it can be a little exposition heavy at times, Lemire does about as good of a job as you’d hope introducing this new character.

The other 1/3 of the book involves the team investigating how/why Hawkman’s JLA transmitter has been tripped, if he is dead, as they presume. Lemire pulled this same trick in “Futures End” a few months ago, with the Nth metal getting the save, so I presume that’ll be the case here, too. We also get J’onn spending a lot of time with Ultra, the baby rescued at the end of the first arc. Lemire has done a nice job keeping J’onn weird, but also making him likable and interesting. The issue ends by Mon-El, a member of the Legion of Super-Heroes showing up, bringing the Legion to their first New 52 appearance in over a year, and the first one that has felt relevant in far longer.

Timothy Green II handles the interior art, and his elastic style is a fun fit for this issue – his work with Equinox is clean and sterile, like the snowy landscape, whereas his work with J’onn is angular and jarring, his Stargirl and Supergirl as cute as his Animal Man and Green Arrow are handsome. His work has the ability to do lots of things within one issue, and with a team this diverse, that is a real skill.

Overall, the issue relieved some of the fears I had going in that losing Mike McKone would kill the vibe of the book – Green and Lemire fit together nicely and craft a story that I am excited to pick up again in 28 days.

Final Verdict: 7.9 – An entertaining, if a little exposition heavy, issue that sets up the rest of the arc nicely. 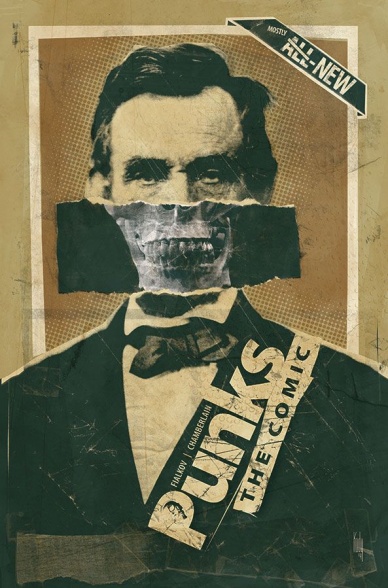 “Punks” is like no other comic on the stands, and whether that fact sounds appealing or repulsive will determine how you feel about it. The book is not illustrated in a traditional way – Chamberlain makes the book like he was making a ‘zine – photocopies, X-acto knives, scotch tape, more photocopies. Because of that aesthetic, the book reads quite differently than any other comic you’ll pick up this week.

It doesn’t help normalize itself by being written in the most straightforward way, either. Fialkov is essentially writing 20 pages of jokes here, involving horrible injuries, awkward romantic encounters, and punches in the balls. This is not a book that is subtle in any way, shape, or form. It is as abrasive, acerbic, and hilarious as “Beat on the Brat” – you’re laughing, but part of that is because you’re a little uncomfortable.

And that’s ok! In fact, I’d argue that’s sort of the point. 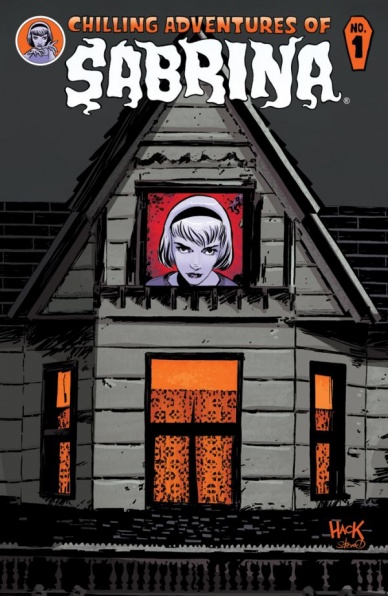 It’s October. There’s a chill cutting through the Autumn air, as the leaves turn crisp and crunchy just before falling to the ground. “Sabrina” #1 hit your local comic shop this week, and if you’re interested in reading a comic imbued with the stuff of the season, you could not do better. I don’t know who is running the asylum over at Archie Comics, but they are allowing some mature and controlled madness brew up over there lately. That’s the brilliance of “Sabrina” #1 – it’s mature without being overly graphic (though there is one animal mutilation scene near the end of the issue that might make you gasp a bit), and it’s mad without being illogical or all over the place. It’s a face-value re-imagination of the basic conceit that this is a story about a teenage girl who is also a witch, taking the mythology of the “witch” pretty seriously. It’s not tongue-in-cheek, or cynical, which is where some otherwise straight-laced re-inventions find their novelty. If there’s any novelty to be found, it’s in the ’60s setting, which casts an air of nostalgia and a hint of kitsch to the proceedings.

No, quite simply, this is the story of Sabrina Spellman. A troubled child with an occult past (which is played out in gorgeous macabre detail) who becomes a troubled teen, living with her witchy aunts. How she navigates a new school in a new town, given her magical background, is where the conflict comes in. And while previous iterations of Sabrina the Teenage Witch may have handled those situations lightly, with humor and charm – “The Chilling Adventures of Sabrina” is clearly going to come at it with a creep factor. Instead of having a magical misadventure, we’ll be questioning the motivations of these characters, and the occult will be as much of a threat as it is a plot dalliance.

What makes “Sabrina” truly “chilling”, however, is the gothic art of Robert Hack. Hack’s colors are the standout. The book is Halloween in the heart of Autumn in your hands. Each page is lovingly crafted to make a startling or amazing whole, and the creative team fully commits to the visual approach. Riverdale may be ’60s kitsch personified, but wherever Hack takes Sabrina, he brings the chilly feeling of Autumn with, and dark magic just beneath the surface. Not only is “Sabrina” the book that embodies the Fall season best, but it will stand as one of the best new titles of the year for its willingness to fully commit to its style.

Final Verdict: 9.8 – One of the best issues of the year in comics. 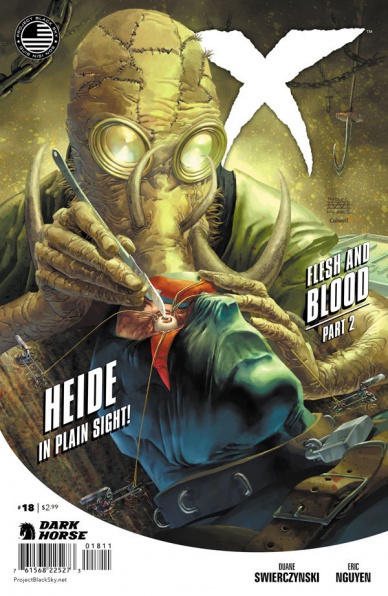 Last month, I had some unpleasant things to say about “X” #17. Mr. Swierczynski, I would like to formally apologize. I had hoped that the concerns I listed would be addressed, but I didn’t expect you to do it so swiftly and easily. Well done, sir. Well done. And as for Mr. Nguyen, there wasn’t really a way for you fix the issues I had with some of last month’s panels. BUT! You didn’t repeat any of the mistakes this month, and the issue looked as fantastic as all of your previous ones.

If you haven’t tried “X” yet, you’re really missing something special. This is a fresh take on the vigilante genre, and it’s still only $2.99 an issue. It’s tough to beat this kind of value.