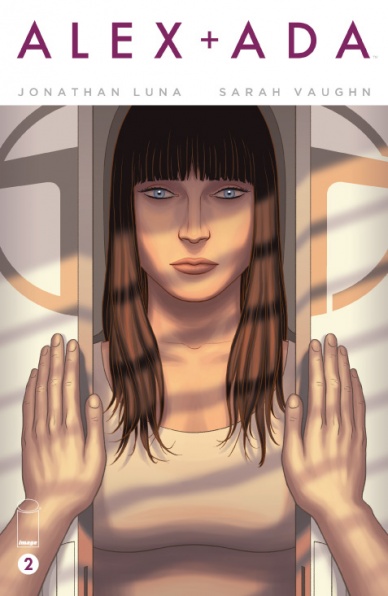 I never had intentions to buy this book, nor did I really know what it was about. However, due to the a flip through at my local shop, I impulse purchased it, and I honestly cannot say how happy I am that I did. This is a truly wonderful book, dealing with a man who is a bit lost due to the loss of a person he cared about (break-up, not death) and a surprising relationship he builds in the ashes of it. Ada, the very lifelike robot woman his grandmother purchases for him as a birthday present, is made to be someone we incredibly, deeply care about by issue’s end. Luna and Vaughn managed to take a backdoor into our brains and hearts through subtle, clever storytelling that has us openly rooting for Alex to give Ada a chance, and it’s never feels manufactured, only effortlessly organic throughout.

The future this story exists in is filled with technological wonders that are utterly believable, and Luna’s art is a perfect fit for this timeline. His tremendously clean lines and subtly expressionistic art elevates the story and makes all of the characters feel all the more lifelike. A great comic should be the marriage of writing and art in service of the story, and Alex + Ada is a book that is burrowing its way into our hearts thanks to two creators working in lockstep. Try this book out for size. You might just find your new favorite book. 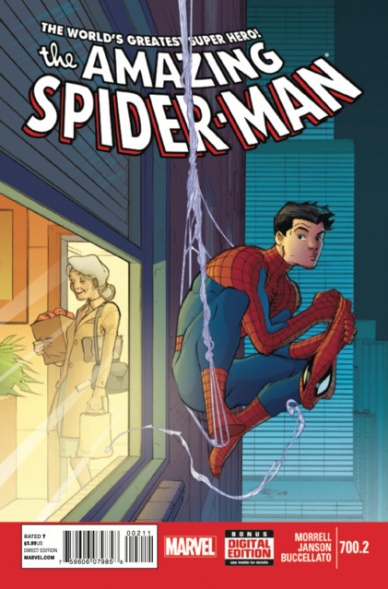 David Morrell went to the web to let everybody know that this issue was mistakenly released without many of the corrections that he submitted to Marvel for the final release. Apparently the wrong digital file was used in the final published issue. Without knowing exactly what those corrections were, the final product isn’t weakened all that much. This story is, in essence, a treatise on the nature of Peter Parker himself which runs through just about every one of the key elements to his character. In that way, we’ve seen dozens and dozens of stories that cover this. Still, it’s effective at what it does, is actually fairly poignant if you’re still a sucker for an Uncle Ben reference or two, and is a fine “Peter Parker for dummies” story. Morrell examines both Peter Parker and Spider-Man’s efforts vs. the snow storm of the century, so he’s given all kinds of opportunities to show the resilience of the character, but it’s also a little hokey in the way that overly heartwarming stories can be sometimes.

Klaus Janson’s art is perfectly classical for a Peter Parker throwback issue. His Peter Parker reminds of John Romita Jr’s longtime stint with the character – fitting, considering he often inks JRJR. Most impressive is the way that he and colorist Steve Buccellatto paste New York City with dense amounts of dangerous snowfall. It’s beautiful and terrible in the way that a huge snowstorm can be. It’s also an opportunity to show a side of the character and his heroic nature that we don’t often get to see. He’s an essential cog in the most bustling city in America, not just a man who fights off wacky super villains. 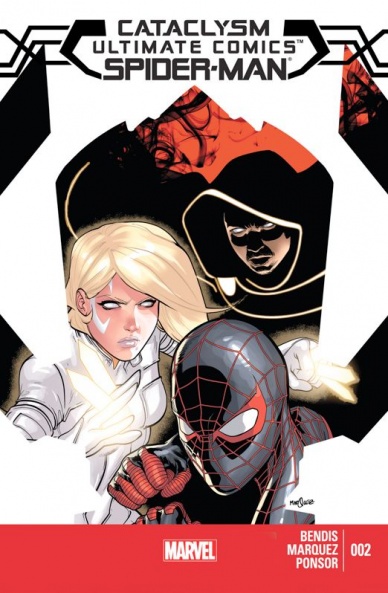 The strange thing about Cataclysm, for me, is I’m not buying any of it besides the Spider-Man tie-ins, and besides an eye-to-eye meeting of Cloak & Dagger and Galactus, this book very much exists in the periphery of this Ultimate event. It’s really all about how the characters of this book, namely Miles Morales, Cloak & Dagger and Bombshell, are dealing with the ramifications of the arrival of Galactus, with one eye on how things went during Ultimatum. I’m fully comfortable in saying Brian Michael Bendis completely, utterly crushes this issue, displaying these young heroes as ones who learn from the events of the past and strive to be better than what they learned from. The idea of “with great power comes great responsibility” permeates throughout this story not just in Miles Morales, but in the heroes he has influenced and related with. It’s not just one of the best examples of this book doing its thing at its absolute apex, it’s one of the best examinations in comics of the youthful will and spirit that has driven some of the greatest moments in history. By the last page, when Bendis drops the god damn hammer, we’re disarmed completely by what happens, but it speaks volumes to the power of Miles Morales as a character.

Once thought of as a marketing ploy, Morales has been proven to be a great character in his own right, and I hope I am reading Bendis written Miles Morales stories for a long time coming.

I went this far without mentioning David Marquez, an artist who is somehow completely underrated yet utterly brilliant, and someone who elevates each and every moment in this issue. Sure, we have one big splash page that is effectively a remix of word balloons after last issue, but he’s still given a lot of moments to add weight and import to the story, and throughout he does just that.

For those that are passing on this as an event tie-in, let me just say this: you’re missing one of the best superhero comics on the stands in the process. Don’t make that mistake. 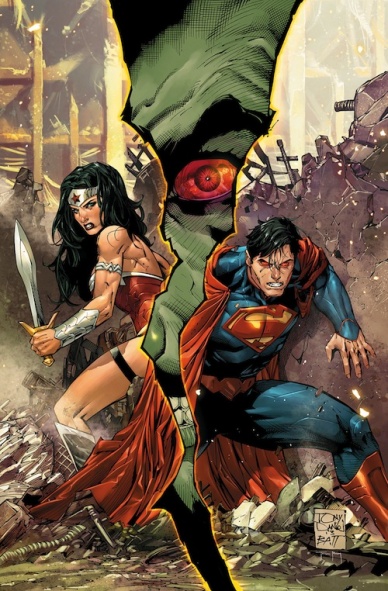 This issue really isn’t a Wonder Woman and Superman story – it is really a Trinity story, and sort of a Justice League story. Regardless of its classification, it is a good one. This issue, along with the work that Greg Pak has been doing in “Batman/Superman,” has done more to show the humanity in Superman than just about anything else in the New 52. Soule really understands the Bruce/Clark friendship, and even if Bruce seems to care a little too much about Clark’s romantic relationships, it felt like the antithesis of what the New 52 has done to their friendship. Diana is handled less masterfully, but she’s a tough nut to crack whenever giving her romantic situations. Tony Daniel’s art is exactly what you’d expect it to be – well executed, but a little soul-less (no pun intended, Charles).

Everything about this issue brought me back to the days of “Infinite Crisis,” which are some of my favorite 21st century DC times. The heroes were working together (even though, they sort of aren’t), there was a real heart at the core of the issue, and familiar characters and ideas were handled in new and interesting ways. I honestly can’t believe how much I enjoyed this issue, and that is a testament to what Soule is doing at DC.

Wrapping Wednesday: Micro Reviews for the Week of 03/04/20