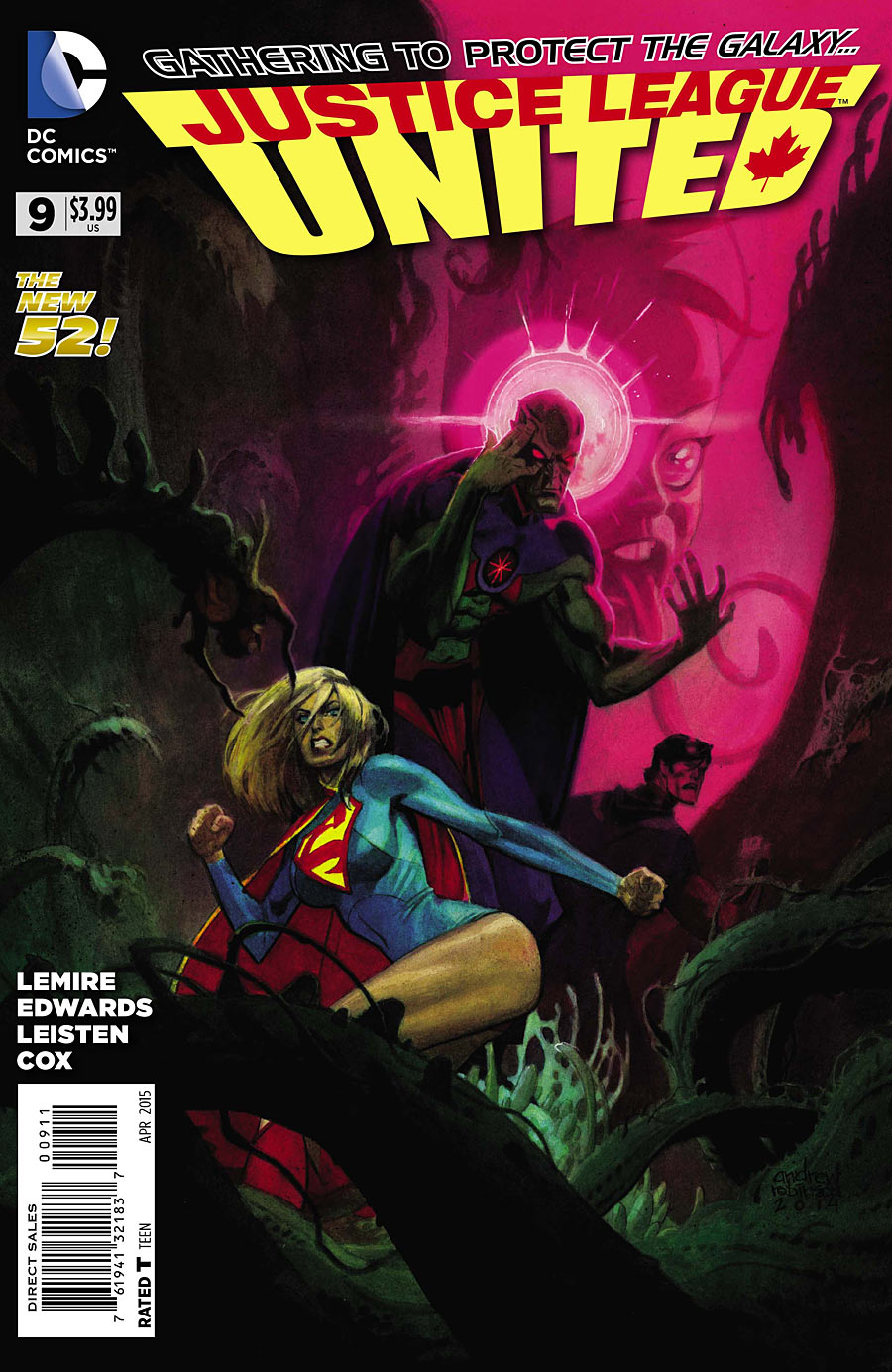 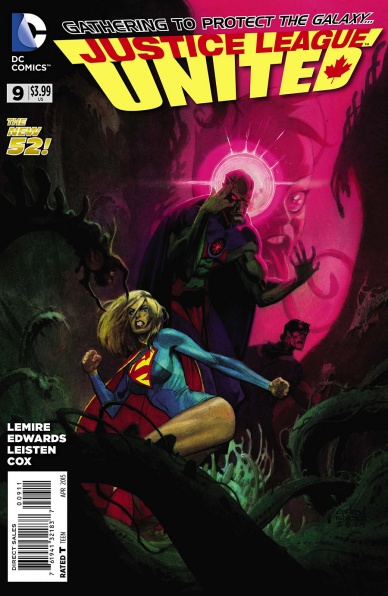 As ‘The Infinitus Saga’ begins its wrap up, “Justice League United” finds its stride by having a cast so sprawling that you can’t help but not know at least one character per page. The bulk of the Legion of Super-Heroes is found here, as well as the fan-favorite lineup of the JLU, and Lemire manages to balance out the action between the two teams pretty well. Of course, your enjoyment of this arc might be tied into your enjoyment of the Legion, but each issue, this one included, only focused on a small number of Legionnaires at a time, allowing neophytes a chance to get to know a character or two, here or there.

Neil Edwards does a fine job on the issue, although everything comes off a little perfunctory, and you can see the effects of having to draw dozens of characters on almost each page, with some inconsistencies or nondescript faces showing throughout. His Hawkman, in particular, suffers a little from same-face, seemingly always gritting his teeth and looking feral, regardless of the situation.

Ultimately, this issue feels like the penultimate installment of not just an arc, but of a major run or series. If rumors are true, Lemire is done after next issue, and there is more than a little bit of the end of James Robinson’s “Justice League of America” run present here, with Lemire cramming in a ton of ideas to cover what he might have wanted to do with twice as many issues. The issue flies by, because each panel is packed with a ton of information, a slew of characters, and a lot of action.

Final Verdict: 7.8 – A strong, if overstuffed, chapter to this arc 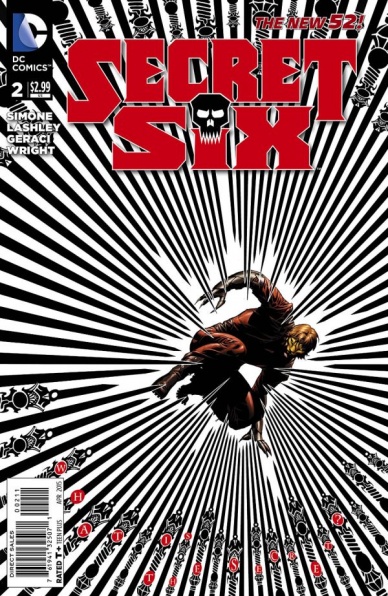 After such a stinker of a first issue, it wasn’t hard for “Secret Six” #2 to exceed expectations. Sure, this still doesn’t hold up to the classic versions of the team, but this issue feels like a step in the right direction, with giving the characters some motivation, and getting them out of that stupid death box.

Lashley’s art is significantly improved here, seemingly by getting both looser in actual draftsmanship and more focused in terms of his layouts and breakdowns. Gone is the sloppy look of last issue, replaced by something feeling far more visceral and raw. It also helps that Simone has toned down some of the more obnoxious touches of the characters, and lets Catman take center stage, while giving him a backstory that, far from perfect, works relatively well.

Final Verdict: 6.9 – A much stronger installment than the first issue, but still lots of room for improvement. 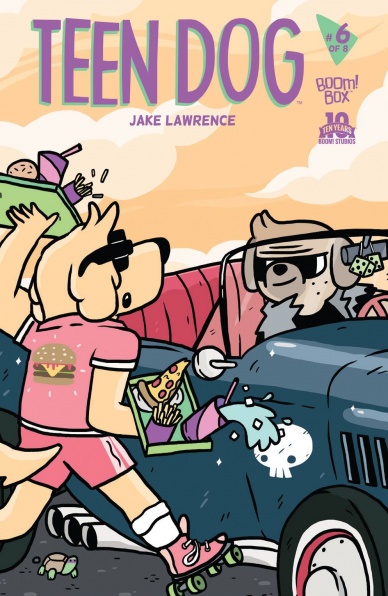 Jake Lawrence’s “Teen Dog” has been nothing short of delightful since it began. Each issues shows Teen Dog and his best friend Mari navigating the daily drama of being a teenager. “Teen Dog” #6 sees Teen Dog and Mari needing to get jobs so they can buy skateboards and pizza. Mari has an easier time doing this but Teen Dog of course goes through many trials and errors. You almost forget that the story revolves around an actual dog and that’s part of the charm. Lawrence is writing a very accessible and relatable comedy that any one of any age can enjoy. It’s his artwork that really sells this series by being expressive, cartoony and full of visual gags. Mari’s design is hip and current with a half shaved hair cut and clothing that gives off her personality without her saying a word. Lawrence doesn’t use complex facial expressions but instead does something you’d see in Adventure Time by having fire in someone’s eyes to show anger and Teen Dog having words appear behind him to demonstrate excitement. “Teen Dog” is an all ages book that has reached “Lumberjanes” greatness at times and deserves to be more than a miniseries. This is an issue that shows that off and I for one am very excited to see what Lawrence does next. 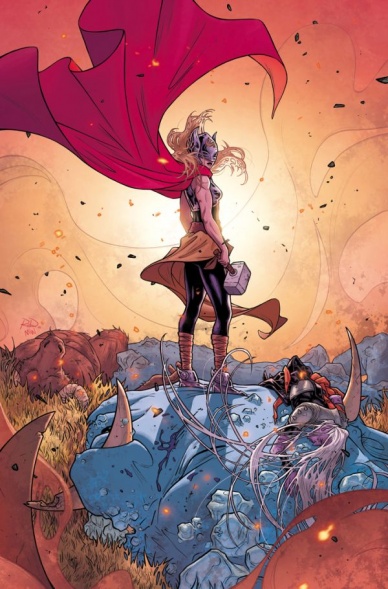 “Thor” #5 is an interesting issue to say the least. Jason Aaron has thrown the new Goddess of Thunder into action immediately but slows things down a little bit here to do some much needed development behind the mystery of who she is. Odison (old Thor) has a list and is trying to deduce who the new Goddess of Thunder is. While all this is happening, Asgardia is going through a deep power struggle but it’s the way that Aaron frames it that sticks out the most. The women of Asgardia are really at the center of this power struggle and Aaron does not shy away from the feminist ideals that Freyja ruled Asgardia with. Odin has not only disposed of Freyja and her Congress but he’s made it clear that her rule wasn’t even valid because she was a woman. At least it comes off that way. Then there’s the action heavy scene with Absorbing Man and Titania that shows Absorbing Man to be biggest “dudebro” imaginable. “Thor” is often thought of as a very masculine title but this issue was very female friendly but at the same time didn’t involve tired stereotypes. Instead Aaron is using gender to demonstrate a power struggle that actually exists in real life and I commend him for that. He’s changing pre-conceived notions of what the “Thor” title is. Jorge Molina steps in as guest artist and does a fine job. The character expressions are very good throughout but there are times where people are a little stiff and robotic. Drunk Thor isn’t messy or sloppy enough and Odin doesn’t visually match up with his attitude. By no means was it bad work but there were little moments where Molina slipped a little. The new Thor is a mystery I’m eager to see solved but I am enjoying the chase. Many naysayers counted this change out but Jason Aaron has just carried over his success from the last volume.

Final Verdict: 8.0 – If you’re not reading “Thor” then you’re missing out on Marvel’s most consistent and arguably best ongoing series. 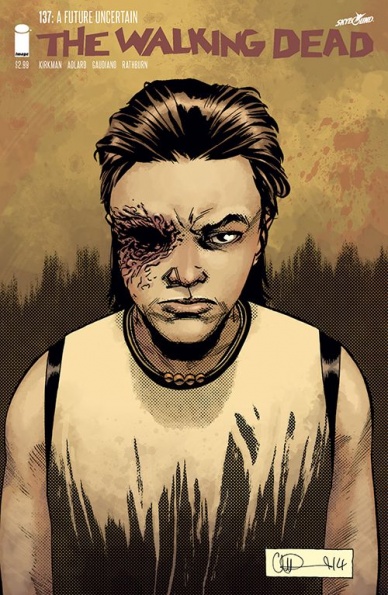 After many people turned on the comic for going into a lull after a while, “The Walking Dead” has been firing on all cylinders since “All Out War” ended, and this issue finds several big story beats coming to fruition. In typical TWD and Kirkman fashion, they’re deplorable, disgusting and completely irresistible.

Many people have turned on Kirkman post TV success, citing him as a one-trick pony of sorts who is a shock oriented writer rather than a truly skilled craftsman. That he’s too reliant on the BIG TWIST. While it’s true that he excels with his unexpected left turns, it’s also true that those twists work because he’s done a very good job of making us care about these characters over the years. I just recently reread the first compendium of the comic, and seeing where characters like Carl and Maggie are now compared to their beginnings make the events of this issue both impress all the more, but feel even more organic. This book works not because Kirkman is a shock inducing writer. It works because the moments are so shocking due to Kirkman’s character work. It’s a fine distinction.

Charlie Adlard’s work, as per usual, is very impressive. He’s developed his craft tremendously since he stepped in for Tony Moore early on in the series, and in an issue like this – with character moments that are gigantic for the series – you can handle things in many different ways, but Adlard always seems to find a way to deliver it with maximum impact. Things like the last page are all the more impactful because of the clever way he thinks through a scene, and the most shocking moment is even more gross because of how far he’s willing to take his art.

There are some awkward moments with the art, like the last bit of Maggie’s story. Jesus appears out of nowhere to witness what is happening, but it’s frankly pretty hard to tell where he was viewing the moment from, and where that would place the other characters in the scene. Sometimes Adlard struggles with mapping out a scene, asking a little bit of forgiveness out of the readers when it comes to that, but this was a moment that stood out negatively.

All in all though, it’s another enjoyable yarn. “The Walking Dead” won’t return to its Eisner winning roots, more than likely, but you also aren’t likely to find stronger fictional zombie drama anywhere, including its enormously rated TV show. It’s well worth paying attention to all these years later.

Final Verdict: 7.5 – another fine issue from a series that is consistently good once again 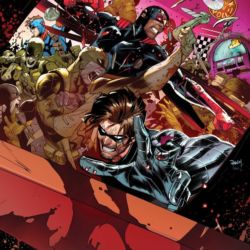 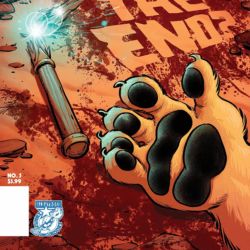 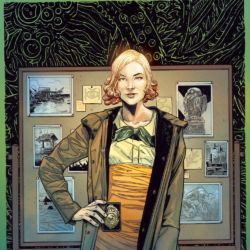