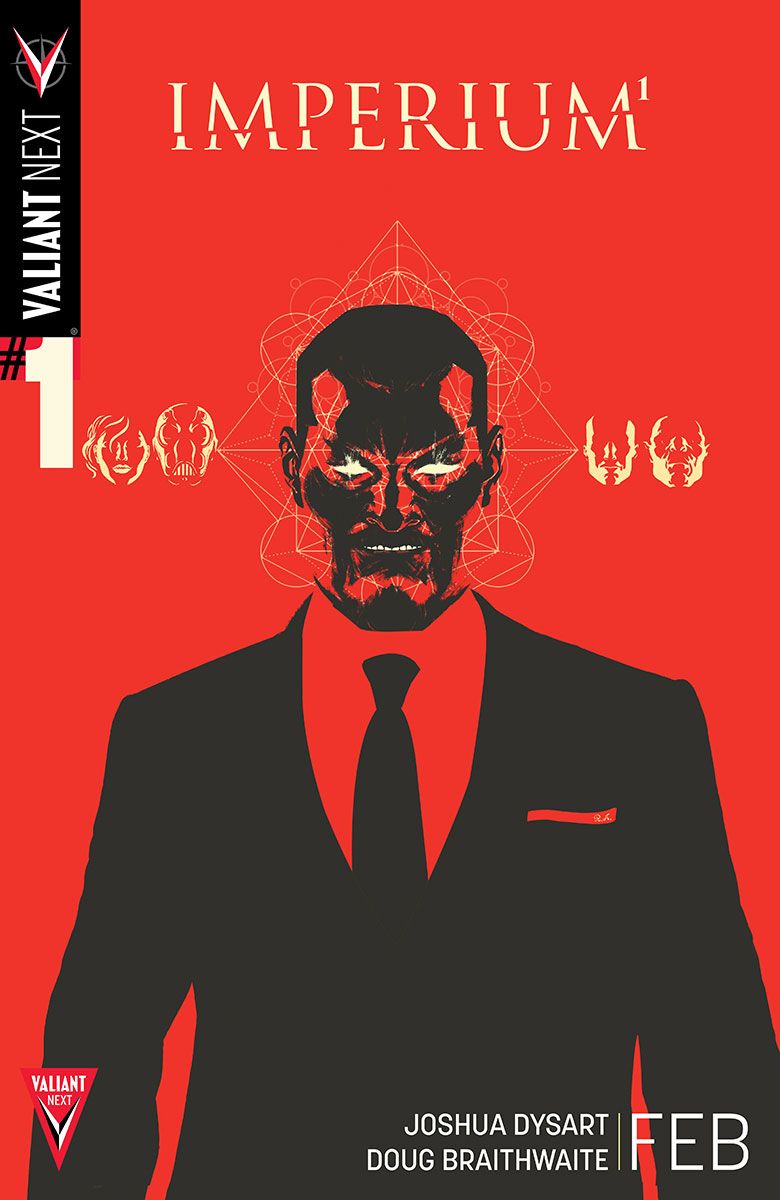 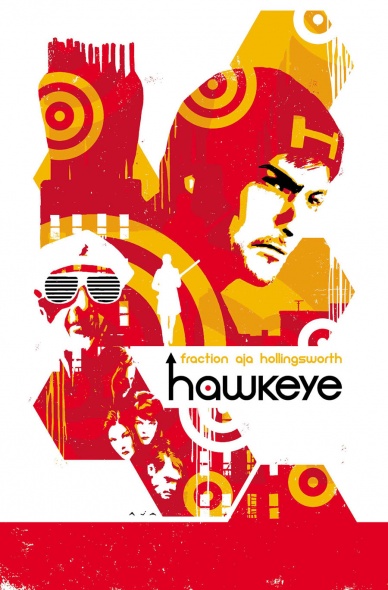 For quite some time, Fraction and Aja’s “Hawkeye” – or HAWKGUY – was the apple of the comic industry’s eye. It somehow matched the mass production practices of Marvel, the heat of the Avengers and the indie sensibilities of Image into one project, and for a time, it was a virtuoso shooting star that couldn’t be ignored.

After that initial run, though, its release schedule made it rather easy to ignore, as the last issue – the one that the events of this issue completely fed off of – was released in September of 2014. Half a year ago. That’s problematic for any serialized medium, but for the comic industry and its “what have you done for me lately?” mindset, it’s a cardinal sin. It was so forgotten that when I walked into my shop and grabbed my comics out of my pullbox, I asked the employees if this was in fact a new issue, or if it was the last issue and it had just slipped by without me getting it. I genuinely didn’t believe that there was a new issue out.

But here it is, it’s real, and it’s spectacular, at times. This whole issue is The Battle of Bed-Stuy, as Clint, Barney and the denizens of the apartment complex Clint owns square off against the Russian bros trying to take it over and their clown assassin compatriot. It’s an exceptionally chiseled action comic, pairing the genius visuals of Aja with an array of superb narrative tricks tied to the situation (I like how Clint’s hearing is impacted even as it is returning). It also takes time for some really nice character moments, particularly Clint’s confession to Jessica Drew that he just wants to be the man that everyone thinks he is. It was a beautiful moment, and one that underlined fiercely why everyone loved this book to begin with. This book looks beyond the superhero to find the flawed man underneath, and the book reaches its highest heights in moments such as this.

The whole issue is a whirlwind of a read, delivering a lot of story in a standard length comic. Aja’s gifts as a storyteller extend it, as he uses unique and rapid fire paneling to make these 20 pages worth 40 of an ordinary book. It reads fast, it reads breathlessly, but it’s dense at the same time. It’s a cleverly made book, and one with a hellaciously impactful ending.

However, it’s hard not to separate “Hawkeye” the comic from the enormous delays that it has seen. This comic is great, truly so. But it’s also robbed of much of its weight and impact because of the fractured release schedule. A fair portion of this issue is spent reorienting yourself as a reader – this is who that is, this is what is going on, why is that a thing? – and because of that, it cuts into your enjoyment as a reader. When this book is all said and done in collected form, it will be an all-time great. As a floppy reader? It’s as flawed as the man at the center of it, even as can’t help but see the greatness within. 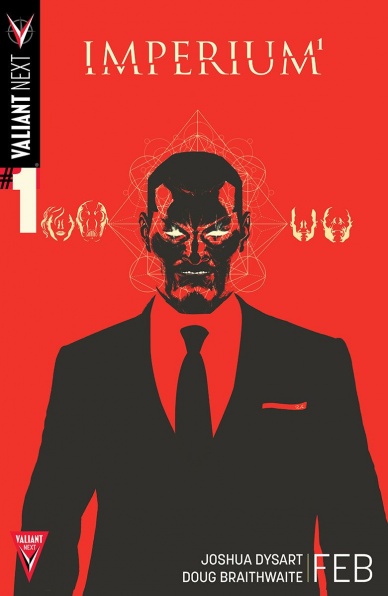 Crafting a series from the perspective of a villain is a tough proposition, especially when the villain isn’t a marquee name like the Joker or Magneto. However, almost nothing about Valiant’s resurgence has been expected, and it has worked out extraordinarily well for them thus far.

Dysart is one of the most underrated writers in all of comics, and the opening sequence of this issue is among the most effective and elaborate ways to open a series, while actually revealing very little about the book in general. That sounds like a knock, but it is meant as anything but – this entire issue, illustrated with care and restraint by Braithwaite, feels like an inhale, taking in the concept and setting the stage for a motherfucker of an exhale. Here’s hoping next month starts that release.

Final Verdict: 6.8 – The book is building to something – I just hope we get that something sooner than later 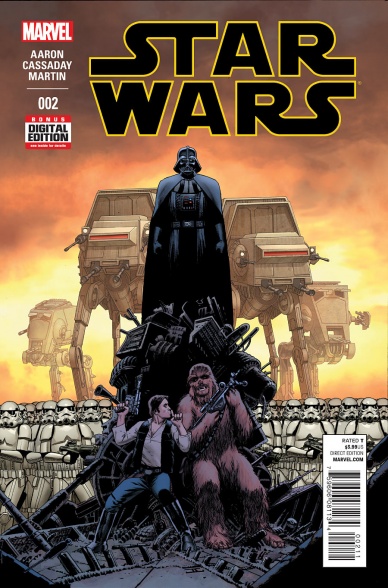 After last month’s nostalgia injection directly into my heart, “Star Wars” can be forgiven for feeling less like A New Hope redux and more like an actual comic. This issue sees a little more action, a little more liberal characterization, and artwork that is a little less tight. All of those things are ok, but I fear that folks who loved #1 for its film-accuracy might love #2 a little less. That’s a fair opinion, but one I don’t really share. Seeing Vader toss Luke’s lightsaber around like a boomerang was pretty dope, and Cassaday’s art breathing a little more means that he may only need a fill in after 4 issues, instead of 3.

My biggest problem remains with the dialogue given to Han – he is the character in the films that changes the most offscreen, and Aaron is struggling a little bit to mix the reluctant pilot from the end of A New Hope and the ‘on-board but skeptical’ rebel from The Empire Strikes Back. Here, Han is a little too much of a guns-blazing hero. In the films, he is more likely to cut and run than anything, so besides rescuing Luke, his motivation should just be to get out of dodge. Aaron is trying a bit too hard to ‘hero-ize’ Han here, and loosening up that development can only be a good thing going forward.

As I mentioned earlier, Cassaday’s art is a little less tight than we saw last month, and that’s ok – no page here quite stuns you (the way a few did last month), but everything is solid, and the action was really fun to read. He is still aces at capturing the characters as they appear on screen, so new readers should have no issue whatsoever identifying who is who in the book. This is exactly the Star Wars comic Marvel should be making – even if it isn’t exactly the one I want to read.

Final Verdict: 7.9 – A book that is finding its way into greatness 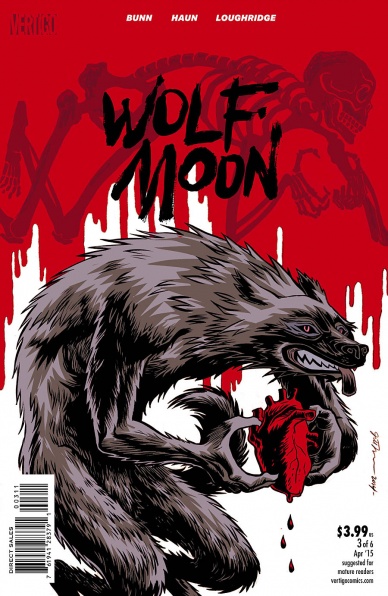 “Wolf Moon” is a fun variation on the werewolf genre, put together expertly by Bunn and Haun. Bunn has created characters that feel both iconic and real, and this issue really brings that home with Dillon showing off both his determination to stop the wolf and his inability to take care of the people he cares about. This issue has the least amount of wolf thus far, but the moments where it shows up really count, with Haun doing some truly terrifying work. The transformation scene at the mall is gruesome and disgusting, while remaining quite scary, as well.

This miniseries has been one of the best Vertigo books in a long time, and signals both creators moving into new and impressive areas of their careers. This is an early contender for Mini-Series of the year.

Final Verdict: 8.6 – This makes most other Werewolf comics look like Teen Wolf, Too.