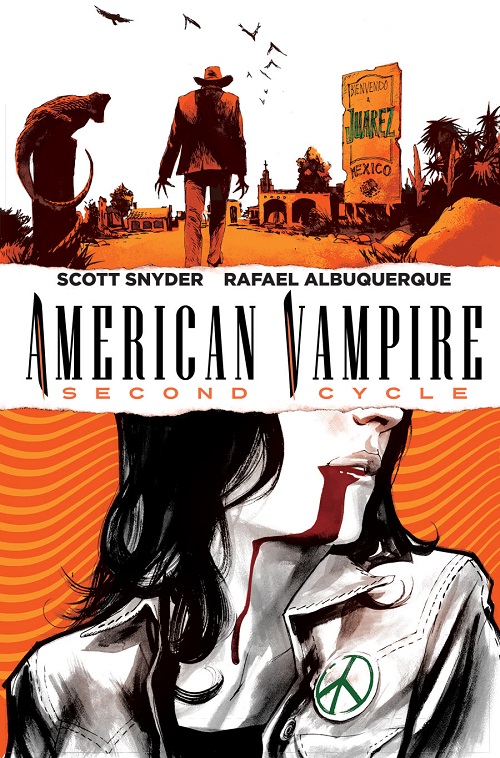 There is a lot to cover on Wednesdays. We should know, as collectively, we read an insane amount of comics. Even with a large review staff, it’s hard to get to everything. With that in mind, we’re back with Wrapping Wednesday, where we look at some of the books we missed in what was another great week of comics.
Let’s get this party started. 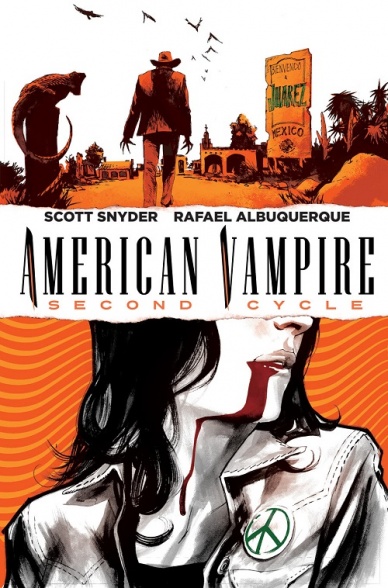 It’s fitting that I tackle the return of American Vampire, as when the first issue dropped, unleashing the beast that is Scott Snyder upon the world and finally getting Rafael Albuquerque the praise he deserved, I reviewed its stellar arrival.

Now, years later and with a lot of other work under their belts, Snyder and Albuquerque return to the book that they both admittedly prefer to much of their other work, and the lust they had to return to the world of Pearl Jones and Skinner Sweet permeates throughout each and every page. You can feel a real confidence and potency to their storytelling that has leveled up since we last saw them, with Pearl returning to her ancestral home to operate an underground railroad of sorts for vampires of all varieties (while pursuing the history and roots of the vampire bloodline) and Skinner doing Skinner things as a criminal in the Southwest known as the “Sugar Man.”

It’s apparent that their stories will bring the two of them back together, through the new breed of – frankly – terrifying vampires which besiege Skinner and that are hinted about to Pearl. These new creatures are depicted with subtle horror, preferring shocking reaction shots and veiled outlines from Albuquerque over overt gore. Dave McCaig, as per usual, is an adept partner for Albuquerque, accentuating his work in all the right ways, and giving moments that are already great added import with his colors.

The places the pieces are at now are natural progressions of where we last left them, and I love how fitting the new roles for Pearl and Skinner feel. Snyder is very vocal about his affection for this book, and when you read Pearl and Skinner, it’s clear that these are characters he hardly writes – they’re people he knows, and when they make the moves they do, however errant or brilliant, they’re the only choices they’d make not because of the vampire in them, but because the humanity lying underneath.

American Vampire was once one of the strongest books in comics, pairing with Jason Aaron and R.M. Guera’s Scalped to be the new flagships to Vertigo’s present. That day has past, but as the Second Cycle commences, Snyder and Albuquerque have announced to the world that they’re back, and in a big way.

And we’re all the better for it. 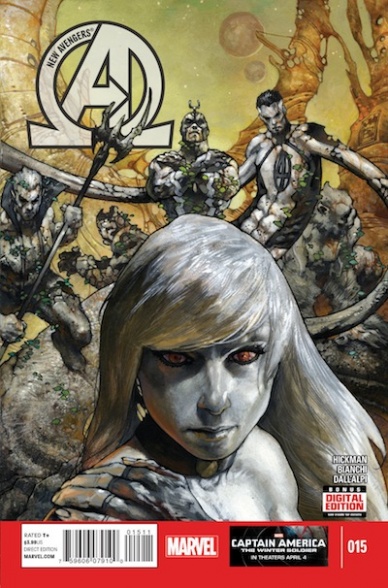 Yeah I got no clue what happened in this issue either.

Final Verdict: 6.2 – One day this Multiversal Cartographer/Black Swan thing will make sense. Today is not that day. Best wait for the complete story. 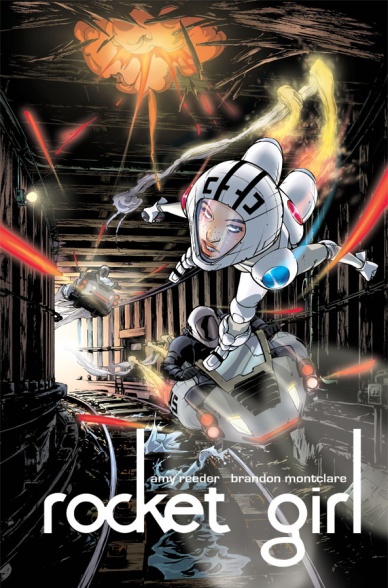 This series has done an amazing job of presenting a complex story quite simply. Each issue, things get a little more complicated, lines get drawn and re-drawn, but not enough to disorient. This issue, we start to see Quintum Mechanics, both the 1986 and 2013 versions, reveal their true colors, while we get to see the police, 2013 version, start acting like police. Montclare and Reeder do a great job of never letting the reader forget that the main characters are all kids, and yet they are kids with huge responsibilities. They may be talking about the end of the world, dressed like grownups, but their youthful faces and their rash decisions bely their actual ages. This issue, in particular, shows each character having to go beyond what their orders are, and to what they feel is right – whether that is to fight against the order of 2013, or stand up to your doctoral advisor in 1986. Not all of them make the noble choice.

Reeder’s work here continues to be absolutely astounding, with 1986 New York looking every bit as grimy and superficial as it was, and 2013 seeming like how an outsider/person looking back without real knowledge would “fix” the past. But it is in her character work that she really shines here – the innocent abutting the cynical is always good fodder for art, but Reeder and Montclare refuse to let cynicism win, and that infectious spirit makes this book an even greater joy to read. 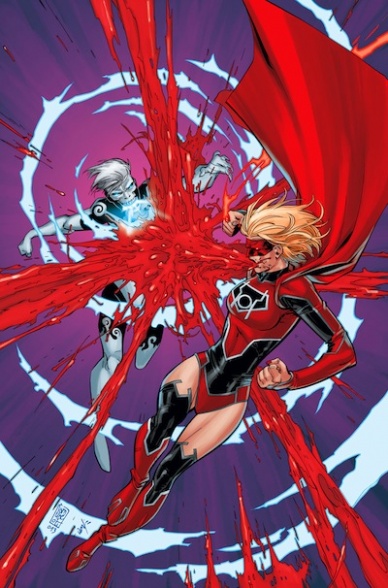 While leading ladies like Wonder Woman and Batwoman have faired quite well in the New 52, Supergirl seems to have drawn the short straw. In an effort to raise her stock among the readership, Bedard and Cinar have taken the grim and gritty route, slipping a red lantern ring on those dainty Kryptonian digits. “Supergirl” #29 kicks off the ‘Red Daughter of Krypton’ arc, and while the story does little for the development of Kara Zor-El, it’s a fun read in its own way. With Kara reduced to a mindless murder machine, Siobhan (a.k.a. Kara’s ex-roomy/Silver Banshee alter ego) takes center stage. Banshee, who works as a sort of evil Shazam, makes for a fitting foe against the blood-spewing Kryptonian. The pairing allows Cinar to let loose artistically, with red flames, energy beams, soundwaves and crackling energy dancing across pages. The design for Kara’s red lantern get-up is particularly striking. There’s something inherently strange about a “Super” character in a domino mask. Having followed Cinar since his work on “Legion of Super Heroes,” I would argue that this is among the artist’s strongest work to date.

The issue itself ends on a bit of an odd note, steering the reader towards last month’s “Green Lantern/Red Lanterns” flipbook to continue the story. Over the course of the issue, Bedard breaks away from the Red Lantern Supergirl story to develop a number of subplots involving Dr. Veritas, Lobo, and a demonic lizard-like army. It will be interesting to see how Bedard wrangles all of these disparate plot threads. Each one is interesting in its own right, but they fail to form a cohesive story. Overall, “Supergirl” #29 isn’t the salvation the series needs at the moment, but it is an unexpected move that may end up paying off for the girl of steel. 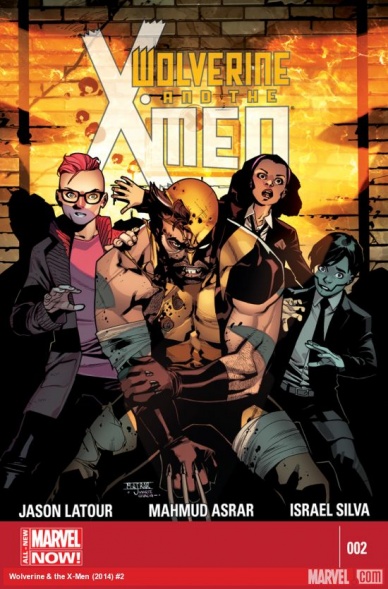 This series has so much potential – between the setting, ripe for excellent stories, and the top notch creative team, this should be a homerun. But it isn’t – at least not just yet.

Instead of focusing on the variety of the students at the school, which is clearly where the first volume looked for inspiration, this series is focusing more solidly on Quentin Quire, with Storm, Wolverine, Fantomex, and a few others playing supporting roles. This issue, in particular, felt a little like The Itchy and Scratchy and Poochie Show, where even when Quire wasn’t in a panel, it seemed like people were asking “where’s Quentin?”

I am not the world’s biggest QQ fan, and so this issue felt a little lackluster to me (not including Quentin’s incredible “Days of Future Pasta” shirt), but the series clearly has potential. If nothing else, Asrar’s art continues to amaze – his Quire, in particular, has a ton of character, and his action scenes have a grace that suggests chaos but is presented clearly. What hurts this book a little is the prior volume’s almost universal love – that book moved the X-Universe forward in a really unique way; it presented hope in the time of fear, and had a tone that felt both optimistic and dangerous at the same time. Unfortunately, thus far, this newly relaunched book just hasn’t set that, or any, unique tone just yet. 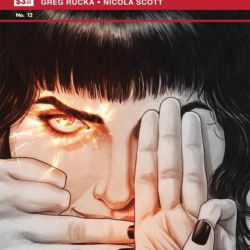 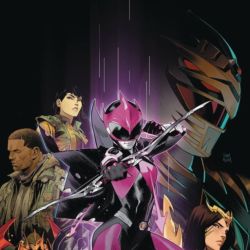 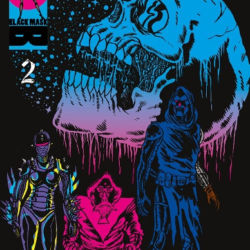