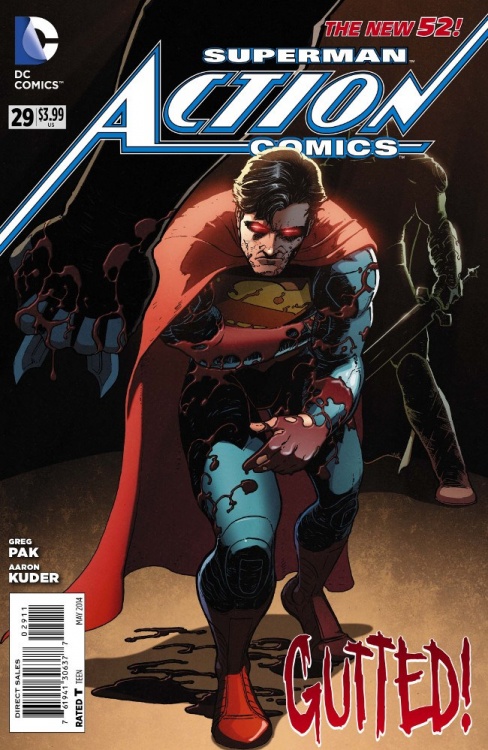 Make sure you have a box of tissues handy, because this issue of “Action” is a real tear jerker. Wrapping up most of the “Subterranean world” threads, issue #29 is action packed and full of emotion. Superman is attacked on all sides, and with an increasing number of impossible situations mounting, he’s forced to make some extremely tough decisions. In this short run, Pak hasn’t been afraid to shy away from this aspect of Superman, bringing the great power/responsibility axiom to bear on one with extremely great power. As usual, the Clark/Lana relationship rings true, forming one of the best character dynamics seen in a Superman book in quite some time. While the comic world is in a tizzy over the Wonder Woman/Lois Lane conundrum, I would gladly read a book that consisted of Clark and Lana just shooting the breeze.

Kuder continues to knock it out of the park. This issue shows the artist getting extremely visceral, cutting to the heart (quite literally). In a surprisingly violent scene, Kuder depicts the Ghost Soldier massacring a hulked out subterranean lemur. It’s a frightening scene, but it takes on a more terrible light upon turning the page. Lying in pieces, on the verge of death, the creature reverts to its normal form. Drenched in blue blood, the creature lets out a quiet “eeep,” and it’s over. That’s only the beginning of a series of heart wrenchers that Pak and Kuder have in store. On the other end of the spectrum, Kuder also gets to go wild with Clark’s powers, turning his brute strength, heat vision, and freeze breath into elemental forces of nature.

Final Verdict: 9.3 – Buy. Pak and Kuder take Superman and the reader through a wide array of emotions, making for a powerful and well-crafted read. 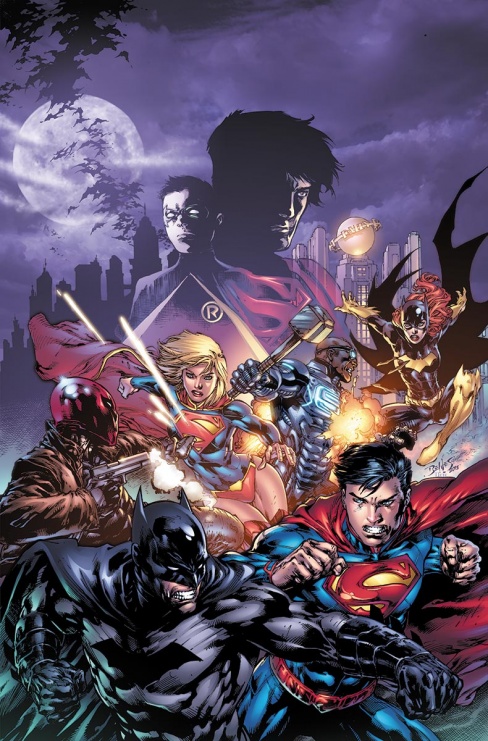 Better late than never, Greg Pak and company serve up an oversized annual teaming up not only Batman and Superman, but members of their extended family as well. The issue acts as a sort of sequel to the Brett Booth Mongul arc, although it can (thankfully) very much be read on its own. When the son of Mongul appears, Warworld in tow, the World’s Finest are forced to gather a team of their allies to fight for the sake of Earth. This leads to fantastic and surprising team ups, terrific character beats, and some very emotional moments. Pak pays heavy tribute to both character’s long histories, and the losses they’ve experienced in that time. Supergirl, Wonder Woman, Steel, Red Hood, Batgirl, even Krypto all get their chance to share in the limelight.

Clocking in at 38 pages, the issue splits the art duties three ways, with Lee getting half the issue and Rocafort and Tan tackling the other half. It’s not surprising that Lee’s effort is absolutely stunning, but this may rank among his best work on the title yet. Lee nails the menacing look of Warworld, the regal Jochi, and his grotesque subservients. Rocafort and Tan’s styles pair well with each other, but feel aloof next to Lee’s utter uniqueness. Rocafort’s work seems less detailed and smoother than usual, bringing it more in line with Tan’s style. This gives a sense of visual continuity for the book’s latter half, but it’s shame the artist isn’t able to fully cut loose.

Final Verdict: 8.6 – Buy. “Batman/Superman Annual” #1 is an immensely fun done in one issue and a rare showcase for the heroes’ extended casts. 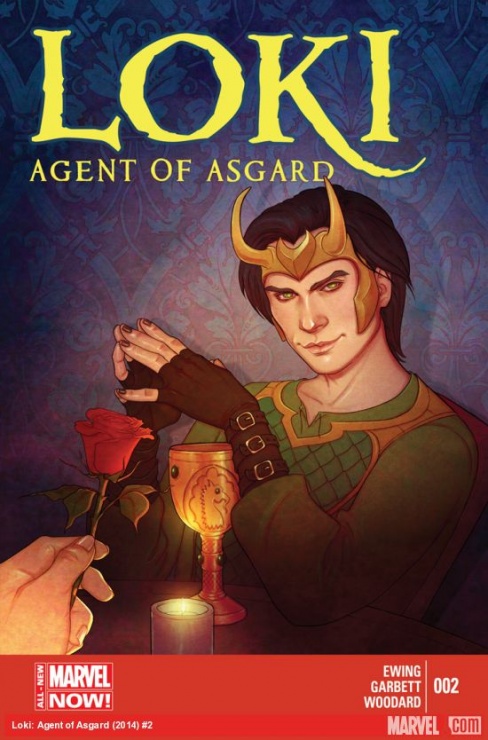 Loki: Agent of Asgard #2
Continued below

Al Ewing’s stint with Loki has been tons of fun so far, managing to break away from the iconic turns that Kieron Gillen gave his character many times over, while still maintaining a lot of the charming stuff we like about him. One of the most noticeable aspects that Ewing and Garbett bring over from Gillen & McKelvie’s “Young Avengers” is the willingness to experiment a bit, under the guise of trickster magic.

Issue #2 brings Loki to a speed-dating service, so naturally the Tumblr crowd gets to keep their handsome, charming bastard Loki and plenty of “Dawww!” moments to go with him. Loki is very much starting over, and trying to find his way in a new life. The dating service setting allows Ewing to play fast and clever with the dialogue and play a couple of characters off of one another. Like McKelvie before him, Garbett gets off a couple of visual gags (“She Heisted My Heart!”) and surreal moments in the name of pure entertainment and visual inventiveness. Fans of Garbett’s work on Bryan Q. Miller’s “Batgirl” will be pleased to find that his work here is even better, and the tone of the book is quite similar. This one looks like it’s going to delight month in and month out. 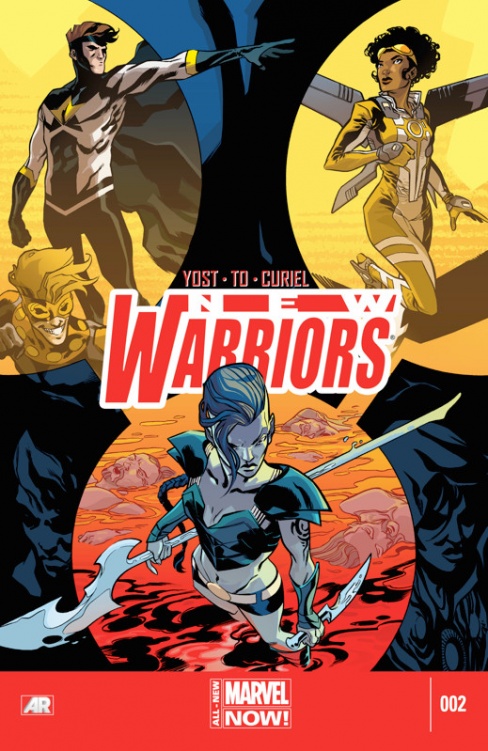 Yost continues to carry the New Warriors as far as he can away from the events of ‘Civil War’, which is a little odd, considering that’s what most modern comic readers probably know them best from. On the other hand, Yost is primarily concerned with having raucous fun with these characters, so any surprisingly smooth transition away from their marked past is easily forgiven. Having said that, there are an awful lot of characters being juggled around – none of them all that well-established. Somehow, this feels like a completely fresh start for the New Warriors, but one that you still need to be acquainted with the New Warriors to truly appreciate. Issue #2 plays with lots of action, but little grounding. On the plus side, the team as a whole gets its legs underneath it and acquires something of a mission statement going forward. That mission: to solve the problems that the aloof Avengers and the tumultuous X-Men teams don’t have time for. In reality, something potentially massive is lurking around the corner, with Nova in the clutches of the High Evolutionary on Wundagore Mountain with the fate of the world potentially in their hands. Marcus To’s clean cartooning always produces handsomely rendered character and clean, vibrant action sequences and “New Warriors” is no exception to that fact. To is one of the most reliable artists in comics and his approach remains true, giving the proper gravity to the new role that the New Warriors are looking to carve out for themselves in the Marvel Universe. 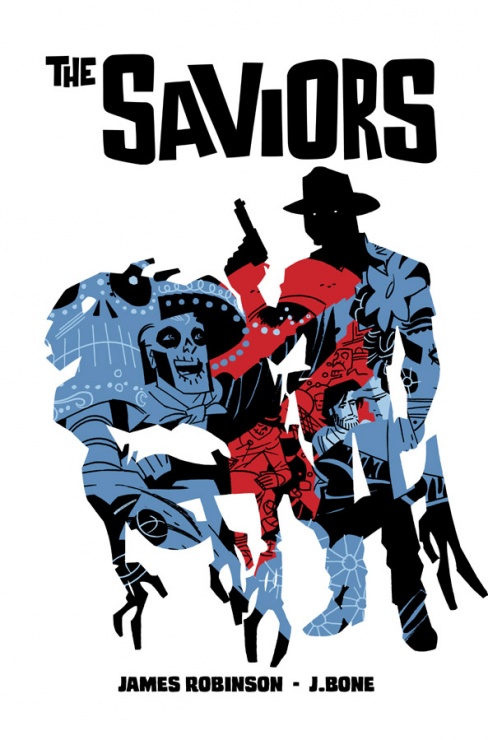 This issue, bathed in a pale red, is all about hope. Tomas hopes the Mexican city is a safe place, the team hopes that Larry’s device works, Nate hopes that Tomas comes around. Of course, by the end of the issue, almost all of that hope is dead, as we see a Spanish-speaking alien comes calling for the resistance’s heads.

J. Bone’s work continues to be staggering – his characters are among the most expressive in comics, his monsters among the most terrifying. His work here recalls a Southwestern They Live, but instead of sunglasses revealing the true face of the monsters it is…marijuana? That’s my theory, at least, that Tomas getting stoned is what allows him to accurately view the aliens.

Robinson’s script is tight and full of purpose. Sure, the exposition around a few plot points can be a little much, but it would be for Tomas, too. He needs to be caught up to speed, as we do, and so this is the reality of his life: many, many words delivered very, very quickly. As this first arc moves onto its back half, there are very few books I look forward to as much as “The Saviors.” 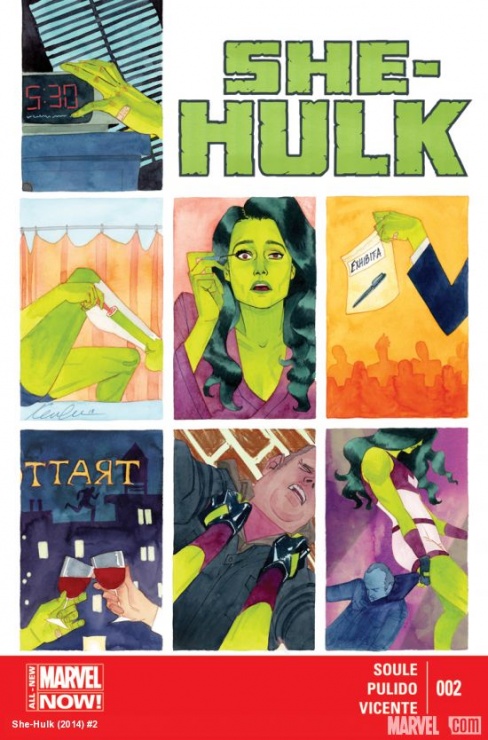 This issue finds Jennifer Walters adjusting to her new situation in her own law office, and it is the type of story that easily could have been very typical from page one. But it’s like everyone involved just threw out the playbook and do their own thing, and man are we lucky for it.

This issue feels so fresh and so fun, effectively developing the supporting cast while telling a fun little A.I.M. centric story, and establishing the new environment for the book. The latter point was my favorite aspect of the book, and Soule and Pulido did a phenomenal job with it. The idea that a former mutant – affected by M-Day but still remembering what it was like to have powers – opened up an office building for those with super powers is completely genius. Sharon King is a sassy, fun as all hell character, and I love the look and feel Pulido and colorist Muntsa Vicente give the building she runs. It feels lived in and completely charming, and that’s what all of it feels like. Organic, natural and wholly inviting.

By the time Jen and Patsy Walker, Hellcat are off having a very unique girls night out, we don’t just want to read this book, we want to live in the world they live in.

It’s kind of crazy how good this book is after two issues, but with Charles Soule, Javier Pulido and Muntsa Vicente on the book, I guess it should be expected. I knew it would be beautiful, pop classic of a book with Pulido and Vicente, but Soule’s writing gives it a lot of pop and fizz as well. This book, my friends, is the total package, and should be read by everyone. For real.

Final Verdict: 9.0 – this book is an absolute gem