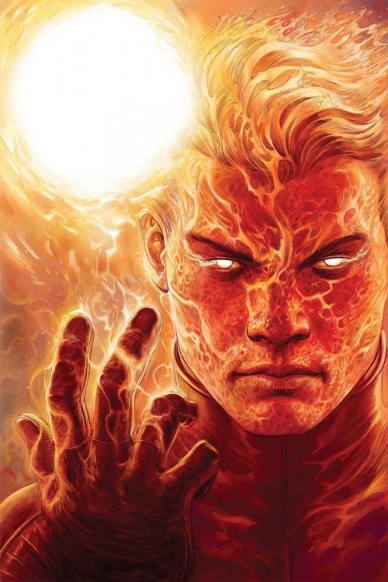 One of the hallmarks of James Robinson’s team books is the sense of family that always seems to pop up. The idea of the Invaders as brothers is what separates this book from just about every other team book on the shelves today (save for “Fantastic Four” which is, you know, an actual family). Of course, there is a slight problem here, in that Cap and Namor interact in other books without the camaraderie.

But that isn’t enough to make a scene about, because this book reads like such a breath of fresh air. Pugh’s art balances the iconic, Golden Age feel of these characters with a more modern style, but more than anything, he manages to stay true to each character in each and every panel. Namor’s hubris and majesty are constantly on display, as is Jim’s humanity, as is Bucky’s eye towards the shadows. When Jim “flames on,” Pugh has managed to give his appearance an update, while still being the more engulfing, fire-ish Torch we’ve always seen.

This is clearly Robinson’s love letter to classic Marvel and this issue, in particular, feels like a book out of time. Using Jim as the main narrator allows a different voice to slip in, and lets his overwhelmingly positive outlook really color the book. There isn’t a hint of cynicism in this issue, and coupled with a crazed Eternal, a WW2 flashback, and Pugh’s art, these 20 pages represent the most I’ve smiled reading a comic this week. 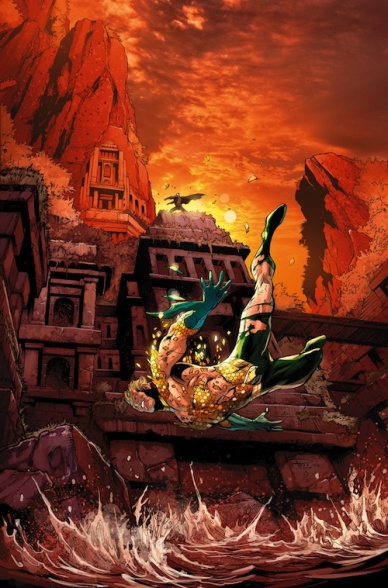 Jeff Parker’s “Aquaman,” thus far, has given Arthur a world to play in that isn’t quite as unique as where Diana lives in “Wonder Woman,” but it has begun to establish itself as a book with a particular feel and tone that isn’t really replicated elsewhere. I mentioned “Wonder Woman” here because there are some elements in this issue, mainly involving Hercules, that are reminiscent of her solo book. The theorist in me believes that this is perhaps a hint that Parker is the next writer of her series after the Azzarello/Chiang reign ends, but this could also just be Parker being attracted to what is clearly a great character and book right now.

Pelletier and Ramirez turn out to be a nice, simpatico pair here, as the penciller split doesn’t feel awkward or jarring, but rather, as natural as you could hope for. Overall, this issue has most of the elements that I would hope a Parker-written title would have, save one. All the other issues had a really clever, funny streak to it, and this issue just felt a little too serious in tone for who Parker tends to be, and a huge part of that is the continued presence of Atlantean politics. I really hoped that “Aquaman and the Others” would take the need for monthly updates from the Atlantean council away, but that clearly isn’t the case. This is a solid comic, on the precipice of being a great comic. 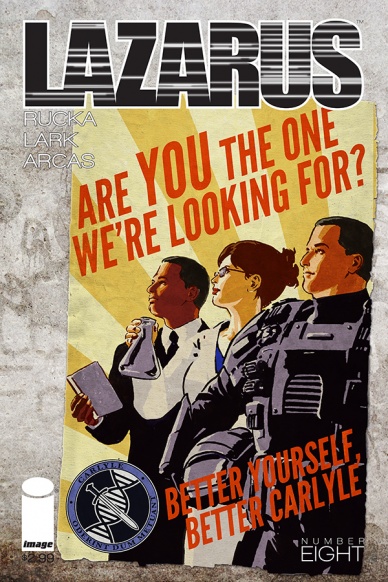 I don’t know about all of you, but I read letters columns. I think they’re often tremendously interesting, especially with a book like “Lazarus” which adds value to that area by putting story depth into the space by laying out families in this world like The Armitage Group. One of the things that stands out about the letters column in this book is how often people write in to lament that “nothing is happening”, and to me, that’s both obnoxious and indicative of readers who are simply missing the point of reading a book, and more specifically this one.

What Rucka and Lark (and other collaborators like Santi Arcas, Brian Level and Eric Trautmann) are doing on this book goes beyond “things happening”, they are quite literally building a world. When Marisol has a conversation with Forever’s father about whether she can beat her teacher or when Michael is fixing little girls dislocated elbows, it isn’t about moving a plot, it’s about establishing a world and characters that we can care about in this world that has been torn down by the powerful people who run it.

This issue and this arc have done a phenomenal job of both expanding on the world and in giving us an array of characters we can care about and be invested in to give those moments of “things happening” appropriate weight, and if that’s not what a person is looking for in a story, I’m not sure why they are reading.

Either way, Lark and Rucka continue to prove themselves as masters of their craft, as the scene where Michael fixes the little girl’s “nursemaid’s elbow” in particular is a one-page PHD level example of comic book storytelling. Lark and Arcas make this world feel very lived in, and I mean that in the most dire of ways given the state of the world, and Rucka fills the air with rich, intent driven dialogue. This is a book that is lean and effective, just like its protagonist, and I wouldn’t want it to be anything else.

Bonus points go to the continuing trend of including ads from the world of the book on the back cover. Love that touch.

Final Verdict: 9.0 – the world is building, and it continues to “Lift” the story (Heyo!) 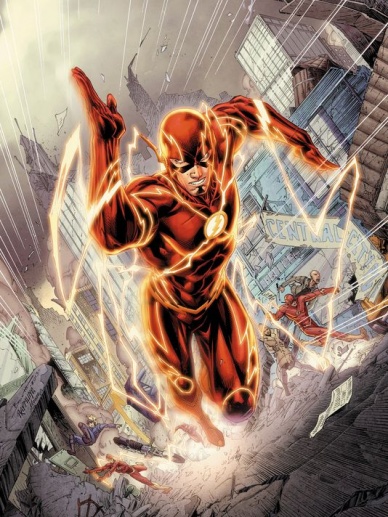 This is the debut issue of the new ongoing “The Flash” creative team, and they spend much of the issue establishing Barry Allen for new readers. While this isn’t the worst way to start off a run, as it shows us just how kind, justice-obsessed, and, well, late Barry tends to be, it also feels a little like stalling. The first few pages, along with the last few, tell an interesting story: what happens when the Flash isn’t there to help?

Instead of jumping right into the story, however, most of the issue revolves around Barry’s appointment with a work-ordered therapist, to discuss, ostensibly, the events of “Forever Evil.” There is a fun little sitcom gag where, whenever the therapist turns her back, Barry runs off and helps people, but beyond that, most of the book is just exposition that we really don’t need to enjoy the book.

Booth’s work here is about what you’d expect, which is kinetic and very 90’s styled, but suits the book better than his work elsewhere, due to Barry’s constant motion. Booth’s Barry seems to always have his head somewhere else, which is a pretty neat thing to establish in his first issue working on the character, but it is his work with the Flash, in costume, that is a little more troubling. For a book all about motion, Barry’s running seems very stiff and lacks grace. Booth does a nice job of drawing the world standing still around Barry’s blurry motion, but Barry himself looks like a mannequin at the Nike store, stuck in a generic running pose.

However, the book has established a hook in the initial appearances of Wally West – both times as a tragically deceased teenager. The last sequence almost has a Primer vibe, with Barry going back in time again and again to save Wally. Handled properly, this is a fun place to take Barry – and hopefully Booth’s rendering of his running improve enough to make the book satisfying visually, as well as plot-wise.

Final Verdict: 5.5 – Browse, but give another issue a try.