There is a lot to cover on Wednesdays. We should know, as collectively, we read an insane amount of comics. Even with a large review staff, it’s hard to get to everything. With that in mind, we’re kicking off Wrapping Wednesdays this week, providing micro reviews for some of what we didn’t review. It’s the perfect time too, as this week was frankly gigantic.

Let us know if you enjoy this in the comments, as this is strictly a trial run of this column. If enough of you enjoy it, we’ll carry it over on Fridays going forward. 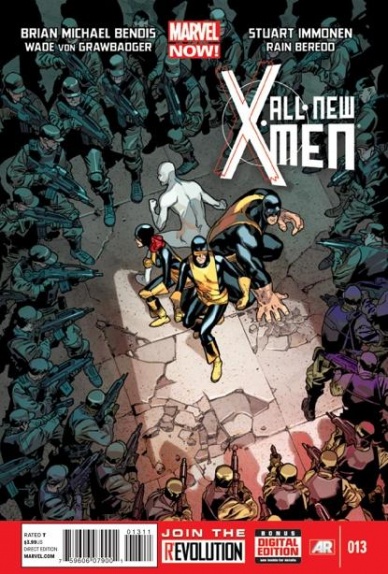 “All New X-Men” #13 opened with a big bang, leading the reader to believe this was going to be one heck of an issue. Sadly, despite some interesting development regarding Mystique’s sinister plan, the issue quickly fizzled into an abrupt cut-off without much grace. This was balanced out, though, by some choice dialogue, such as Kitty’s M-word rebuttal, and Stuart Immonen’s gorgeous artwork — though I have to admit, there were a few panels that were surprisingly vague for the usually on-point Immonen. 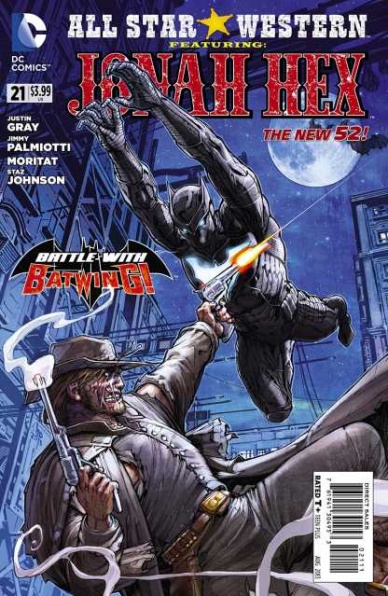 “All-Star Western” takes the Jonah Hex-Booster Gold buddy team-up far into the future of Gotham City. The book loses some of its grounding, but earns credit for being truly weird in a way that Jonah Hex hasn’t been since he time travelled back in the 80’s series. Some moments are awkward and strangely edgy, other moments are pure comic fun. 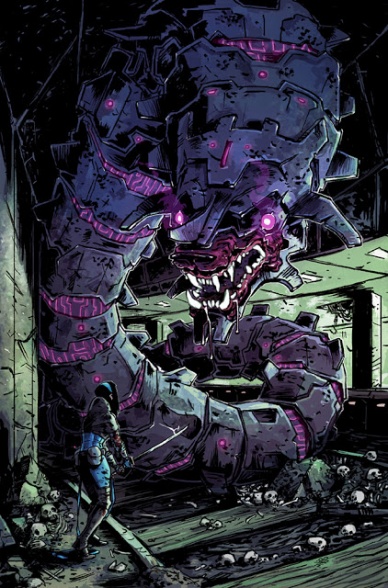 The gorgeous mix of sic-fi and fantasy continues in “Amala’s Blade” – a book with charm to spare. Issue #3 starts ratcheting up the danger for Amala, as she takes on large-scale monstrous threats of a mechanical variety. Though the visual humor is still strong, this issue is a little rougher around the edges, artistically, than its earlier installments.

Final Verdict: 7.9 – Buy for the sword, sorcery, and science fiction. 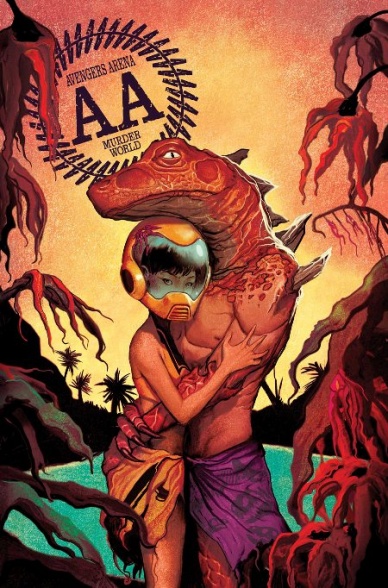 Coming off an issue where a lead (and one of the most beloved characters) died, it’d be understanding if Hopeless took us in a direction of mourning. Instead, he takes us to the beach for a little bit of shark hunting and a little fun in the sun. This issue is very character focused, center on Hazmat and Reptil and how they’re responding to their situation, and it very much underlines how well Hopeless understands these characters. Add in some excellent art from Burchielli – I really enjoyed how he handled Reptil vs. the Great Whites in the open – and this issue is one that keeps its forward momentum going while unifying some of the disparate parts of the book.

Final Verdict: 8.5 – A day in the sun is just what we needed 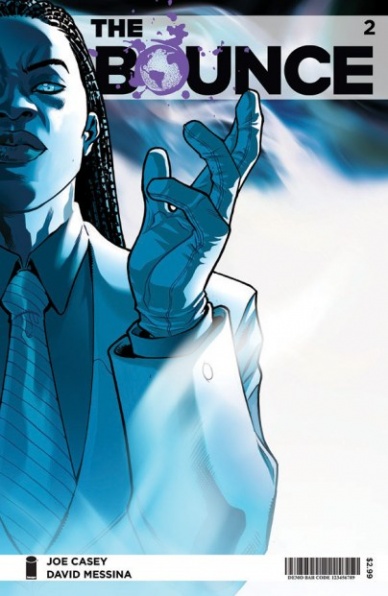 The Bounce #2 has all of the elements of a good book and is a good book. The problem is it could be a great book if it were able to break the been there done that chains that bind it. Slacker hero? Been there. Alternate realities? Seen it. Surprise reveal that the main heroes uptight roommate is a closet cross-dresser? Well, now that is new. Let’s see more of that. 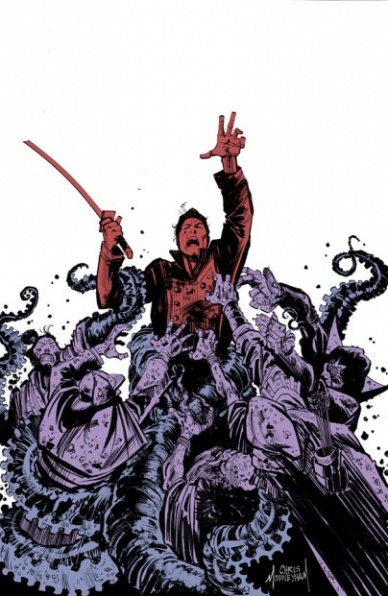 What happens when you combine mystical battles between two age old masters (featuring a dragon!) with the lead taking a vision quest through his own soul to claim the rights of his powers? An awesome comic, it turns out, as Barbiere and Mooneyham continue to craft one of the best comic minis of 2013. This is a very important issue, as Fabian Gray is at a point where he needs to find who he is and what he’s capable of, but the main plot needs to continue moving forward and the stakes need to be set for the finale. In other hands, it could be a struggle, but Barbiere deftly balances both plot threads and Mooneyham renders everything with the proper import (bonus points for that stunning samurai showdown panel). With just one issue to go, Gray’s fate hangs in the balance, but we know no matter what happens, it’s going to be a damn interesting read.

Final Verdict: 8.5 – a mini that is getting better and better, even from a great start 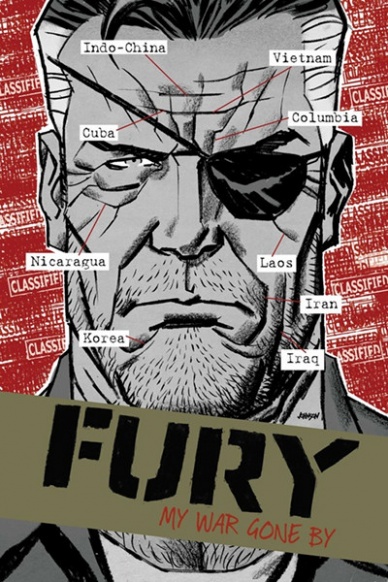 Strangely, this book is not read by anyone else at Multiversity, nor do I know anyone out of Multiversity who reads it. That is an absolute shame, as I am absolutely confident in saying this is one of the best comics of the past year. Ennis and Parlov tell a definitive Fury story over these 13 issues, and in this final one, they drop the final gut punch that is one of the most heartbreaking and truly poetic finales to a character arc I’ve ever seen in comics. Parlov’s art is so perfect for this book for the way his characters move and emote, and in this issue, the anguish and beauty (mostly in George Hatherley’s face as he looks at Shirley one last time) of the story really hinges on his work. Truly brilliant, top of the artform work here. Buy this book! 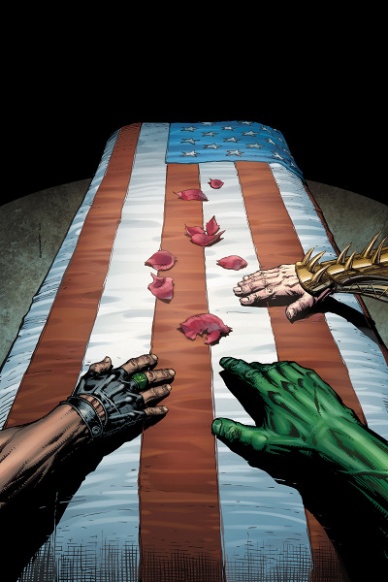 Justice League of America #5 – While not exactly the Citizen Kane of comics, Geoff Johns has created a fun title here that, more than anything else, resembles his early work on “Teen Titans” – a group of inexperienced heroes, tied together through circumstance, getting in over their head. Fill-in artist Brett Booth doesn’t add too much to the affair, but does a capable job here. The story may be a little trite, a little predictable, and a little on the nose, but it’s also a little fun. And in the New 52, you take fun where you can find it. Plus, Matt Kindt continues to craft compelling Martian Manhunter backup features.

Final Verdict: 6.0 – Browse, but perhaps pick up the trade if things keep going this way 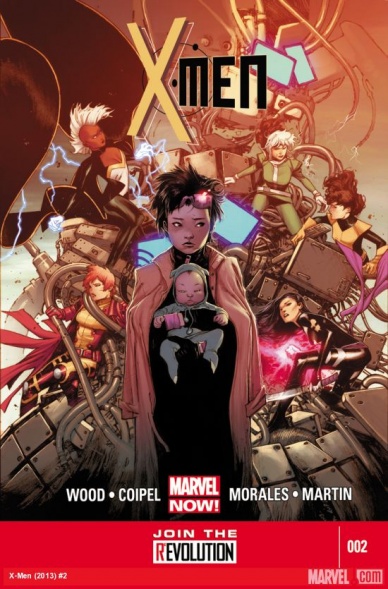 I’m so close to loving this book, but it just hasn’t gotten there yet for me. Wood is doing some quality character work – I enjoy the way he writes Kitty, in particular, and his John Sublime is strangely human – and Coipel is, shockingly, brilliant, but there’s something here that leaves me cold. I’m not sure what it is. Perhaps its the cloudy intentions of Arkea, the brand new villain who is the sister of Sublime, or the weird, undefined role of Jubilee and her baby, or maybe its the occasional panels that Coipel and colorist Laura Martin leave backgrounds to color flares, but for me this book is great in theory but not quite there in execution yet. I’m with them, I just want to love this book and feel like I’m still held slightly at a distance after two issues.