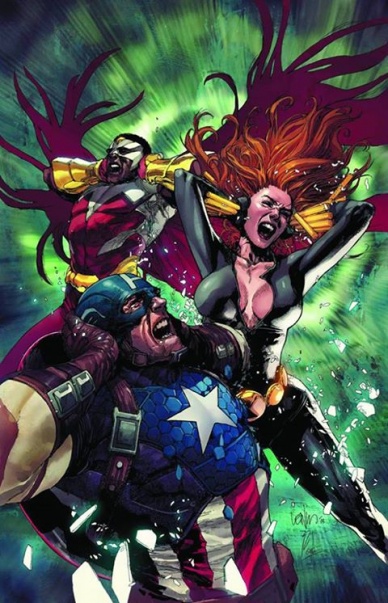 Nick Spencer blends in pretty seamlessly with Jonathan Hickman’s major “Avengers” event. 15 full issues in and the grand scope of what Hickman is trying to accomplish is still beguiling. The Avengers are all out in a massive effort of self-preservation, but who or what is behind it? Stefano Caselli does gorgeous work in bringing larger-than-life battles to the page. There’s a little bit of “get on with it” in this title right now, but this issue really does give you the sense that the layers are peeling back and it will pay off eventually. Yes, yes – everyone keeps saying that about Hickman’s “Avengers”, but it really does appear to be true. 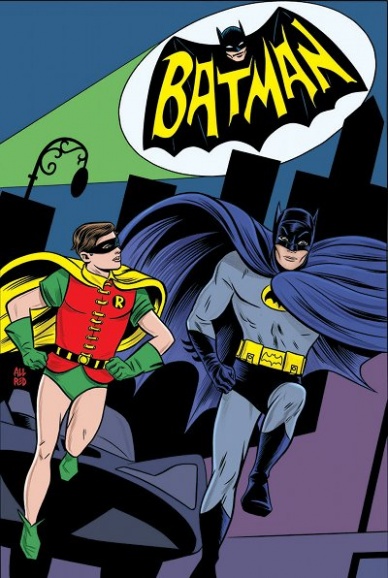 “Batman ’66” sees the camp factors get amped up for a classic conundrum courtesy of the Riddler. Fans of the classic show, obviously, will get a kick out of all the visual and verbal nods to the show, but even comic readers unfamiliar with the show will find respite from the darkness of Gotham in a completely valid take on the character that is as silly as they come. The Jonathan Case art is wholly fitting for the title and does lots of great little tricks that demand careful reading or re-reading. 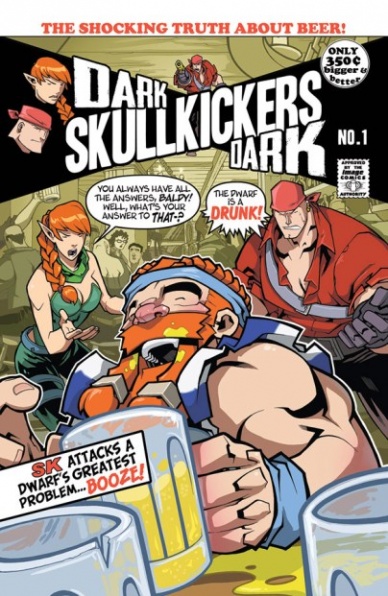 I like to think that I’m one of the more vocal Skullkickers fans, but I’ll be honest — this issue didn’t really do that much for me. As usual, Edwin Huang and Misty Coats — with assistance from Kevin Raganit, Ross A. Campbell, and Ludwig Olimba — absolutely dominated the visuals of the book, providing page after page of truly delightful-to-look-at comics. Unfortunately, this is probably the first “Skullkickers” issue that doesn’t flow smoothly. Hereto, “Skullkickers” has been more than just the jokes, with Jim Zub making very well structured stories, but this issue seemed very disconnected, sometimes from page to page, sometimes even from panel to panel. And, on top of that, there were few laughs to be had! That being said (Spoilers!), the return of Baldy and Shorty’s lookalikes promises some interesting stories to come. Let’s hope this issue was just a fluke. 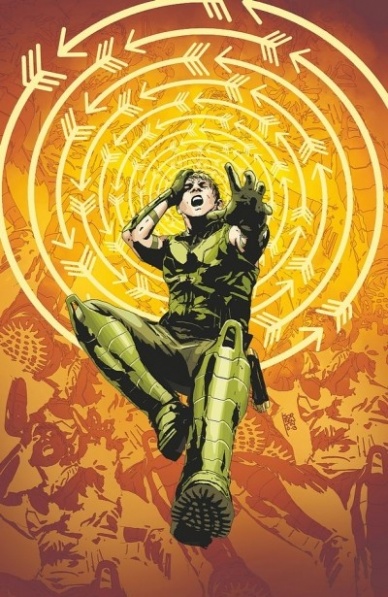 Jeff Lemire has been running Ollie Queen through a psychedelic gauntlet lately. Count Vertigo shows up to blow some minds. The results may end up as a comic book that is uneven and overly mysterious (and MacGuffin-y) from a plotting standpoint, but is an utterly beautiful use of an artist like Andrea Sorrentino, who shines in what is certainly his best issue on the title yet.

Final Verdict: 7.0 – An esoteric plot is better than a boring one 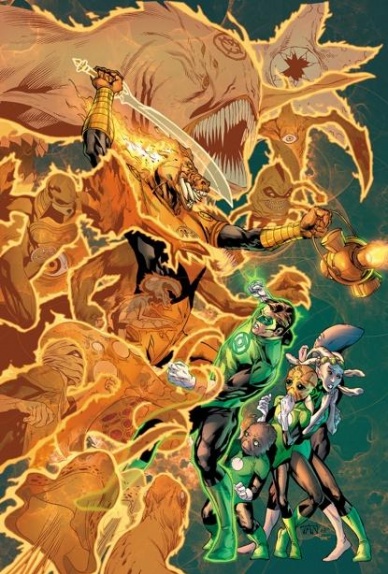 It is odd that this, the flagship Lantern title, is the one with the least sense of purpose of any of the titles, post-new creative teams. This issue moves the plot along a little bit, but it doesn’t come close to giving the book the sort of charge that “Red Lanterns” or “New Guardians” had in their first issues. The art is nice, and Venditti is certainly building to something, but a little sense of urgency would do wonders for this book thus far. The “rebuilding of the Corps” mission statement can make for fascinating comics, but thus far has fallen a little short. 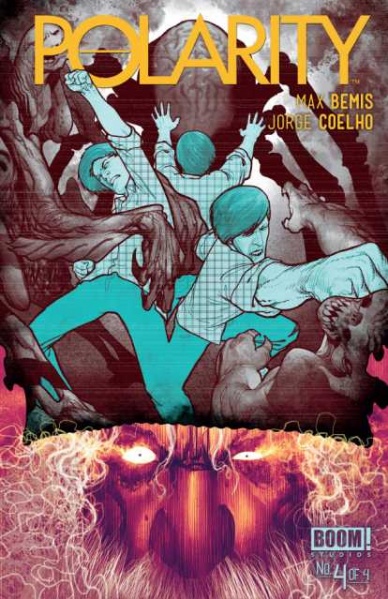 The finale of Max Bemis’ first comic series went the way that these semi-superhero tales usually do – that is to say that we spent much of the time with the inevitable show down between hero and villain. Though these were easily the least interesting sequences in a miniseries that was mostly about mental illness, coming to terms with oneself, and finding your place in the rigors of everyday life – they at least look pretty thanks to Coelho’s offbeat art and the gorgeous, muted colors of Felipe Sobriero. Before it’s all over, the issue finds its heart again. Let’s hope this isn’t the last comic book project Bemis has up his sleeve.

Final Verdict: 7.9 – A decent ending to a very pleasant miniseries. 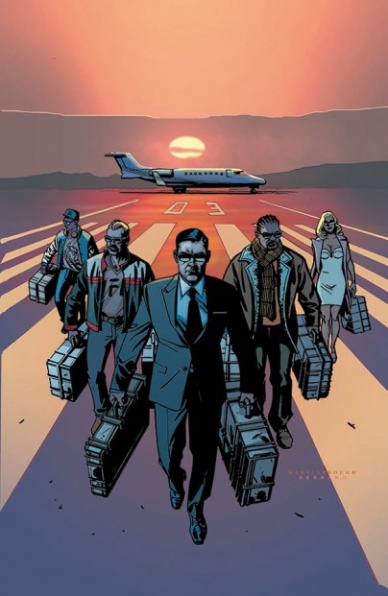 Thief of Thieves is a book that, for some reason, hasn’t garnered nearly the attention of other books with Kirkman’s name on them, even with people like Martinbrough, Diggle, Nick Spencer and James Asmus working on them. And to me, that’s a shame, because this book – while never truly great – is rock solid each and every month. This month’s issue finds Redmond and his crew lining things up for a big job in Venice, Agent Cohen hot on his trail, and Audrey is breaking down and spilling the beans, and it’s all well crafted by this arc’s writer Diggle. Great character moments, exceptional storytelling and cinematic spreads by Martinbrough highlight another strong issue for Skybound’s other Kirkman series. 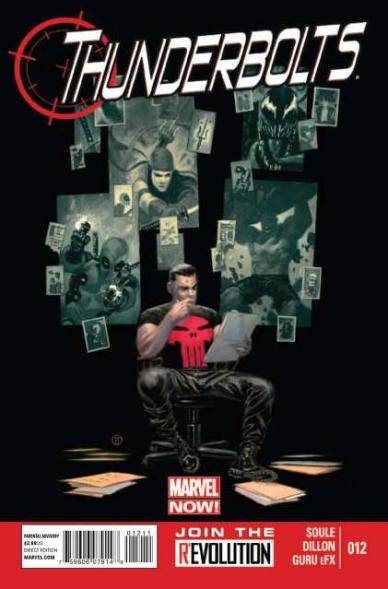 I have a confession to make: I really enjoyed Daniel Way and Steve Dillon’s (then Phil Noto’s) Thunderbolts. Is it a great comic? No, but I enjoyed it for its ridiculousness and its simplicity. It’s just a book that was looking to do its thing, and it did it well. Now, with Charles Soule taking over writing, I was hoping the ship would keep its course. Course kept, as this issue is pretty freaking badass. It follows up on the end of Way’s run, as Frank Castle is hunting Orestez Natchios through identity change after identity change. It’s a great story of Frank, as it shows just how dedicated to his murderous craft he really is. It’s a great character story, and one that Dillon – the artist of all-time great Punisher story “Welcome Back, Frank” – excels at. He’s a guy who is top notch when it comes to violence, and he really kills it here.

Biggest demerit to the book is simple: where the hell is it going? You could say this issue ended the first mega arc. What next, with the team effectively dismantled? It will be interesting to see, but man, I enjoy this. 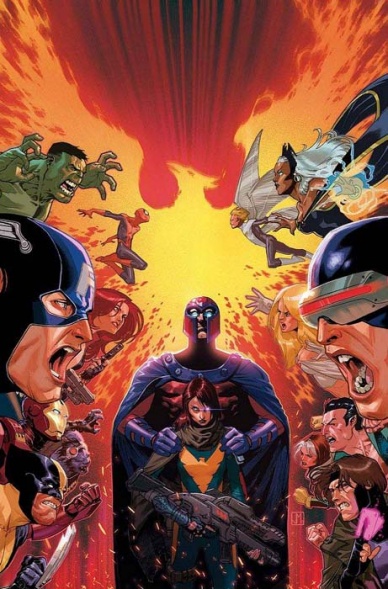 What If? AvX #1
Written by Jimmy Palmiotti
Illustrated by Jorge Molina
Review by: David Harper

The thing about What If? that makes it totally awesome is how it’s all about how what happens if one thing changes? What happens to the way a story plays out if, say, Wolverine’s adamantium wasn’t pulled out by Magneto in Fatal Attractions? What if the heroes didn’t die at the end of Onslaught? That’s the central problem of this new What If?, that is “What If? AvX.” It’s not a what if about a situation, but what if the whole event played out differently. The story is effectively the same from the start, but inexplicably things play out differently even though there is no difference between everything that leads up to it. While Molina’s art is perfectly fine (although there are some storytelling gaffes and confusing sequences), Palmiotti’s concept is flimsy, and effectively is just a new story in the exact same scenario instead of the standard What If? format.

As someone who loves What If?, generally, I can’t tell you how disappointing this comic is. Sure, it’d be perfectly fine as the first issue of “AvX,” but this? This is no “What If?”