The descendant of frontier badass Wyatt Earp has come back to dish out some kick ass of her own. Frontier kick-ass. Check out our review of “Wynonna Earp” #1, below. 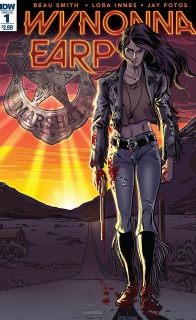 The US Marshals Black Badge division has been fighting back against supernatural threats for decades. But even the toughest werewolf, most bloodthirsty vampire, or grisliest zombie knows there’s one agent to avoid at all cost: Wynonna Earp. Descended from the legendary Wyatt Earp, Wynonna is dead set on bringing the unnatural to justice! Beau Smith returns with artist Lora Innes (The Dreamer) to bring readers a chilling, new Wynonna Earp adventure!

Full disclosure: I have never heard of “Wynonna Earp” until just now. I don’t know why Multiversity Comics keeps letting one of the only reviewers who wasn’t alive during the OJ Simpson trial write about revivals of 90’s properties, but here we are. “Wynonna Earp” #1, the new comic from Beau Smith and Lora Innes based on the comics from the 90’s and upcoming SyFy series, is all about an agent of the US Marshals’ Black Badge division. An agency formed by Teddy Roosevelt in the early twentieth century when he not only learned that organized crime was a thing, but so was paranormal organized crime. I don’t think you should be reading this review while you’re driving, but if you already are, then buckle the hell up.

“Wynonna Earp” #1 is crazy, but not in the same way that people describe stuff like Deadpool or Kung Fury as crazy. Not only is there a secret division of the US Marshals, they’re going after an organ trafficking ring run by a chupacabra. Their customers? Hillary Clinton and Donald Trump who are zombies, eating the brains of academics so they don’t slip into a full on zombie state. “Wynonna Earp” went full iZombie on the 2016 election. That moment isn’t a big reveal or anything, either. The chupacabra man, Mars Del Ray, is just chatting over the phone with The Donald like it’s nothing. That’s unreal. And kind of admirable.

All that said, this comic isn’t always as casual as someone nonchalantly selling brains to zombie candidates. There’s a lot of violence in “Wynonna Earp” that feels over the top, and not in a good way. Most of the comic’s art feels relatively grounded, with confrontations in bars, talks with the chief in the squad car, etc. It’s basically an episode of Law & Order. But once the monsters show up, it’s like somebody turned on the Bloody Mess perk in Fallout. Headshots lead to peoples’ entire heads exploding, It makes sense in an opening scene where Wynonna shoots a zombie with a shotgun at point blank range, but out of place in a diner shootout later on. There’s just a disconnection between the tone of the art and the story that, along with pretty static looking characters, becomes kind of distracting. I’m always a fan of violence in crime stories like this, but the style of the comic’s world doesn’t support the type of over the top violence found in “Wynonna Earp” #1.

As for the titular character herself… uh she’s kind of crazy? Everyone kind of is, with all of the awkward dialogue but Wynonna takes the cake in the diner scene. Del Ray calls up a minion of his to kill Wynonna. Earp shows up at the diner acting like she knows she’s about to get ambushed, walks up to the bar and orders a pitcher of milk. Just a whole pitcher. The assassin walks up to Wynonna and flirts with her which causes Wynonna to spit her first sip of milk into the woman’s face before saying the best line I’ve read all week: “I find that if you spit a mouthful of milk into someone’s face, you learn a lot about their personality.”

How the hell. First of all, Wynonna didn’t even know there was an assassin after her so she just spit milk into the face of a stranger who flirted with her right before she kicked her through a table. Falling through a table pisses off the assassin who reverts to Chupacabra form. Wynonna, delighted by the transformation, remarks that she’d never killed a “Chupacannibal” before which isn’t even a word I knew could happen. If Wynonna didn’t know that the woman approaching her was a monster of some kind, did she just beat her up for flirting with her? Did she spit fucking milk in her face for flirting her? Does she enter every diner like this? Is this the first time she attacked and spat onto a monster and not a flirtatious woman?

I don’t know, nor will I ever. What I do know is that “Wynonna Earp” is the kind of comic where heroes spit milk into strangers’ faces on their mission to keep Donald Trump and Hillary Clinton from purchasing brains off the black market so they won’t revert to their zombie forms on the campaign trail. Honestly, I’ve heard of worst premises. But the execution of “Wynonna Earp” doesn’t live up to its wild potential.

Final Verdict: 5.2 – There’s a lot to like in this book, I’m just not sure how much of that is intentional.