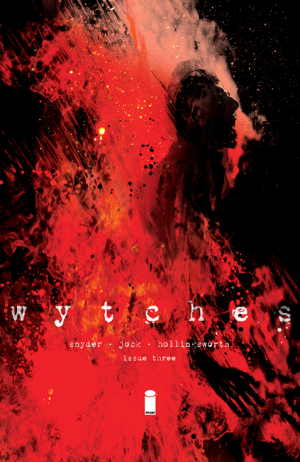 Snyder and Jock step on the brakes, and deliver a quiet and thoughtful issue of “Wytches”. 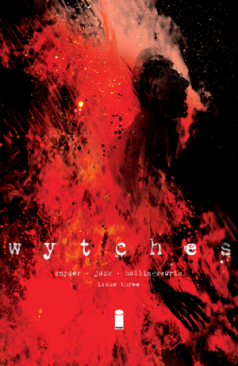 A parent’s worst nightmare: a beloved child lost in the woods. Behind the trees lurk horrors, and the brush conceals atrocity. No matter how desperate the search, understand that your prayers will fall on deaf ears. There is no escape from the Wytches.

“Wyches” really hit the ground running, and has covered a lot of distance in only two months. The character of Sailor and her traumatic experiences have been the driving force of the series so far, but now Scott Snyder and Jock have set their sights on expanding the series and the world of Litchfield, New Hampshire.

The first two issues of “Wytches” have dealt with the fictional things that we are afraid of: boogeyman in the closet, monsters hiding under the bed, demons just waiting to pull you into the darkness. In the latest installment, Scott Snyder has turned that model on its head and temporally leaves the monsters behind to focus on a real-life terror: the disappearance of a child. It is, without hyperbole, a parent’s worst nightmare. The reader has spent the past two issues getting to know Sailor and sympathizing with her plight, only to see her literally ripped away from her family. By switching the focus to the Rooks, and leaving Sailor’s whereabouts a mystery until the end, it provides us a glimpse into the frantic and tortured mind of her parents.

For those readers without children, it’s really impossible to fully grasp what the Rooks must be feeling as they comb the woods looking for their daughter, but Snyder grounds the event in harsh reality. We see the frustration and desperation in the actions of Charlie Rooks and his wife as the authorities try to downplay their fears. We know the truth behind Sailor’s disappearance, and so does Charlie Rooks, so the reader immediately latches on to the character. After establishing Sailor as the protagonists of the story, this was a very effective method on Snyder’s part to shake off the focus, and turn the story into more of an ensemble piece.

The pace of this issue is notably slowed down, and that will surely raise the ire of a few detractors. Snyder, however, appears to have made the deliberate choice to take a breather from the more supernatural aspect of the story to allow more the realistic fears of the Rooks to take centre stage. Nevertheless, there is still a fair amount of wytch-based horror to be found. Charlie receives of paralyzing visit from a mysterious being and later finds his friend encased in a tree, both nightmare inducing scenarios that have already become features of the world of the series. Despite the slower pace, Snyder is sure to include these elements to expand the world of the series, and set things up for the next chapter.

Jock and Matt Hollingsworth have quickly established themselves as a formidable artistic duo, and this issue allows them to show off a slightly more subdued style. Or at least as subdued as it gets in “Wytches”. They mash up their styles in a manner that creates a look that is contrasted and complimentary at the same time. Jock’s pencils can be very harsh and jagged, like scrapes on the page, while Hollingsworth layers softer colors on top. This gives the book an ethereal look as if we are seeing these events through a state of semi-consciousness, trapped between being awake and asleep. Hollingsworth fills the page with colorful auras and blotches that mimics those floaters you see in the corner of your eyes when your sleep. The problem is that there are moments when these blotches completely overpower the actual images on the page. Now, I’m all for challenging the reader, and avoiding the trap of passive consumption in comics, but when it starts to reach levels of sheer confusion, you start getting diminishing returns.

It’s interesting that the most realistically stylized thing in this issue is the menacing bald wytch-type thing that pays Charlie a mysterious visit. So far the creative team have kept the titular creatures off page, invoking the classic less-is-more model of visual storytelling. The visitation sequence proves that the choice to keep much of the wytch action off-screen was correct. Hearing Charlie describe the encounter earlier in the story is much more frightening then actually seeing it with our own eyes. Jock makes sure that the intruder is very creepy and menacing, but it doesn’t compare to the brief glimpses of a gnarled and clawed hand reaching out from the shadows. The scariest moment in Jaws is when the shark finally pops out of the water near the end, and hopefully the full reveal of the wytches themselves will be timed in such a way to have the same effect.

The third issue of “Wytches” is a marked departure from the previous installments, and it was a clear decision on the part of the creative team. Horror of any kind, even the supernatural, is most effective when it evokes universal emotions. Desperation, confusion, frustration. We can all relate to these feelings, and Scott Snyder effectively plays them up to give readers a glimpse into the terror that the Rooks must be experiencing. Jock and Matt Hollingsworth continue to prove that they are a dynamic team, but there are moments when their esoteric side threatens to take over. There is not a great deal of plot advancement, but instead the depth and breadth of “Wytches” and its characters gets a big increase.

Final Verdict: 7.9 – The pacing of the plot is greatly slowed down, but there is still plenty of terror and dread to be found in “Wytches”.