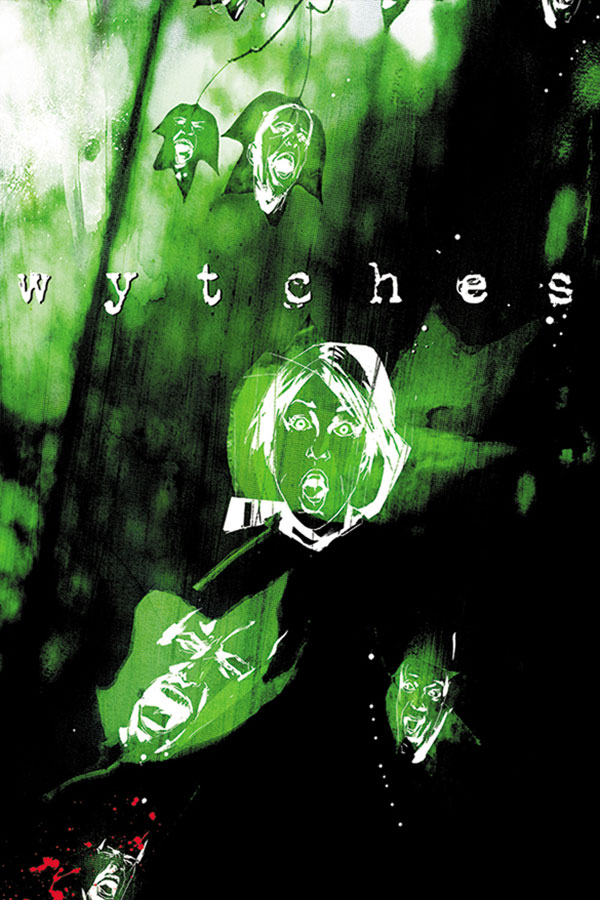 A father and daughter desperately try to escape from a wytches lair, only to discover the real horror that still awaits for them in the chilling “Wytches” #6. 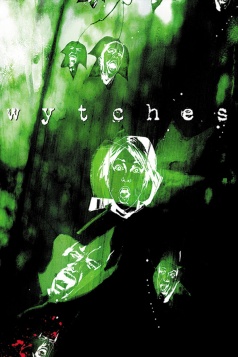 As Charlie struggles to save Sailor from the wytches grasp, the monsters’ true hold over the Rook family is revealed in this, the harrowing ending to the series’ first arc.

Horror monsters seem to love to go after families. From Poltergeist and Sinister to Rosemary’s Baby and The Amityville Horror, it has remained a consistently popular scenario for all kinds of scares and frights. The first arc of Scott Snyder and Jock’s “Wytches” has continued this tradition of families-in-peril, as readers have followed the Rook family as their lives become more and more entwined with the horrifying creatures that inhabit the nearby woods.

Readers last saw teenager Sailor and her father Charlie trapped deep underground in the lair of wytches. It seems like they are about to meet their fate as pledges, but Charlie is not going down without a fight. The pair barely make it back to the surface world, with monstrous creatures chomping at their heels. Their hope is doomed to be tragically short-lived, as they learn that not all monsters come from underground.

Scott Snyder clearly loves horror stories. When looking at the Mers of “The Wake”, the titular species of “American Vampire”, the Rot of “Swamp Thing”, and even the Joker, it seems like his talent might lie in crafting horrifying monsters that keep you up at night, but it’s not merely the creatures that make it hard to sleep. What Snyder really excels at is psychological terror. The moment when Charlie and Sailor burst out of the tree trunk and slip a little further away from the bloodthirsty wytches certainly provides an enormous sense of relief, but it’s really just Snyder toying with the emotions of the reader.

The true wytches lair is not just underground, but is really the whole entire town. They think that they are safe when they feel fresh air again, but this is just a false sense of security. The entire town soon turns against them, and reveals their murderous intentions. The lives that Charlie and Sailor have been leading fall apart around them, and the knowledge that everyone that they thought they could trust has actually been against them the whole time is just as horrifying as the wytches themselves. While gnashing teeth and piercing claws are viscerally horrifying, Snyder knows that the monsters that look just like you are the scariest ones of all.

(SPOILERS IN THIS PARAGRAPH) As with “The Wake”, his last independent series, Snyder throws a twist into the middle of the story. In superhero comics, betrayals and reveals happen all the time, and have the long term ramifications of a minor inconvenience, but here Snyder is perfectly free to show the emotional devastation that would come from one of the people you trust most in the entire world turning on you in your moment of need. Readers have seen Charlie repeatedly risk his life for his daughter, and would expect nothing less of Lucy, Sailor’s mother. The grasp of the wyches has even infected the Rook family, however, and Lucy reveals where her real loyalty lies. While it would be easy to turn her into an evil psychopathic lunatic, Snyder chooses to portray her as chillingly understandable. Lucy has grown up as part of this world, and has a lifetime of experience seeing the inevitable end that finds every pledge. She even tried to appease the creatures, and failed completely. In her world view there is simply no other way this could end. Lucy jumps immediately to the bargaining stage, and tries to spin this in a positive direction. The wytches have restored her legs, giving her a chance to return to her old life with her husband, who she presumably loves, where they can always have more children. From her point of view, Lucy is simply making the best out of bad situation.

Jock and Matt Hollingsworth have worked together to create unique visual tone for the series that has inspired great acclaim and some complaints from readers. Colorist Hollingsworth covers Jock’s pencils in a layer of sploshes, dots and bursts of colors. It’s beautiful and there are moments where it makes it slightly difficult to see the action. This is entirely on purpose, of course, and it gives every page a mysterious and decayed appearance. Charlie and Sailor have no clue what is going on most of the time, and have trouble seeing what is about to leap out at them from the darkness, and the art purposely recreates this experience for the reader.

The majority of the first few issues kept the wytches themselves in perpetual darkness, using the Jaws method to heighten the terror they inspire. With Charlie and Sailor’s journey into the underground layer last issue, they have finally been seen in their full, horrifying appearance. Jock, however, is not content to let the horde of newly revealed wytches be enough to scare the reader, but instead introduces a new type of uber-wytches to chase the characters down. Jock draws them as giant, feral looking beasts that seem far more animal than human. The regular wytches are creepy enough, but here Jock has created killing machines. His lines become less precise and more impressionistic around their claws and teeth, giving them the appearance that their sharp appendages are always grasping for their prey.

After the first half of the issue focuses on action scenes, the second half features possibly the biggest emotional scenes featured in the series to this point. No matter how crazy the world gets around them, Jock always makes sure that the characters expressions are effective and on-point. Sailor’s reaction to her betrayal is almost as horrifying as the act itself, while Charlie’s face becomes a wave of a million emotions as he struggles to comprehend the situation.

The first arc of “Wytches” ends with an issue that combines supernatural horror with emotional devastation. Scott Snyder crafts a well-paced story that lulls the reader into a false sense of security only to rip it away from them. Jock and Matt Hollingsworth continually elevate the artistic stakes, and create images that effectively convey the story and character moments, while making the reader a little frightened to turn to the page.

Final Verdict: 9.0 –The creative team hits all the right notes of a very creepy song.