Juliet said a rose by any other name would smell just as sweet, does that hold true for Laura Kinney and the moniker X-23? 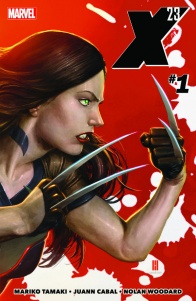 Written by Mariko Tamaki
Illustrated by Juann Cabal
Colored by Nolan Woodard
Lettered by Cory Petit
Cloned from a warrior, raised as a killer, Laura Kinney has gone through hell and come out the other side a hero. After a stint as the All-New Wolverine, she returns to her roots as X-23 to make sure no one ever has to go through the horrors she did. With her sister Gabby and their pet Jonathan in tow, X-23 forges her own destiny in this new series by Mariko Tamaki (HULK, HUNT FOR WOLVERINE: CLAWS OF A KILLER) and Juann Cabal (ALL-NEW WOLVERINE, ELEKTRA).

Let it be clear, “X-23” is not a good name for this book following the continuing adventures of Laura Kinney and her sister Gabby. It isn’t that the reversion is an unfathomable demotion with the return of the not so old man Logan on the horizon. That title both as text and paratext runs counter to the work Tom Taylor did in “All-New Wolverine,” where her rejection of that designation was the emotional climax of an arc. X-23 isn’t a call sign like Goose or Talon, it is a serial number, meant to dehumanize by her owners at Alchemax. For their part the creative team of Mariko Tamaki and artists Juann Cabal and Nolan Woodard, let those connotations hang in the background of this first issue as they begin telling a story about clones and how they assert their personhood.

Tying this issue together is the motif of birthdays and how clones choose to define them. The use of birthdays gives this issue a humanist lean, one that should hopefully make for conflicted emotions as the arc progresses. This exploration leads to one of the more novel groupings I’ve read as Tamaki puts Laura and Gabby with the Cuckoos. They are all clones, but their differing origins lead them to different conclusions on the matter. Gaby thinks it is an awesome idea, like any kid would about the promise of cake. The Cuckoos chose their own day based on a favored actor. Laura doesn’t really care. These decisions help to differentiate and assert their individuality in the face of their copied origins.

If this first issue is an indication, Mariko Tamaki is continuing her internal-character centric style from “Hulk”(or is it “She-Hulk”) while kicking things up a notch. The character centered nature of that prior series set itself apart, but it lacked in the SMASH! department. Tamaki, Cabal, and Woodard, spend the first half of this issue in an extended action sequence as Laura and Gabby take out some anonymous mercenary types. It seems more and more evil organizations are getting in the super solider and genetic modification game, and Logan’s DNA is a valuable commodity. Luckily, Laura and Gabby are there to stop the darker aspects of their families legacy from coming to light.

The action is quite effective in this sequence, Cabal does a good job of setting up panels to play with or against the previous images momentum. One consistent tool is using a series of vertical panels to slowly pan and get in close or emphasize distance traveled. Another tool Cabal uses is an off set a stack of three horizontal panels so that they read in a ‘Z’ motion to keep the felling of momentum from panel to panel as Laura baseball slides under her green foe and slices their Achilles tendon. The cleanliness of the action exposes some slight redundancies between words and pictures. Laura internally monologuing about how nonplussed she is about her upcoming birthday while jumping out of a building is great. Laura explaining how she is taking out these thugs for reasons is redundant. The opening pages told us all of this information visually. These are minor moments of friction in an otherwise good book.

Juann Cabal and Nolan Woodard shined in the action sequence like they did during ‘Orphans of X.’ The other half of the issue shows their character chops as they work through Tamaki’s small character moments and the book begins to tell something more than the standard superhero fair it started on. Together Cabal and Woodard create a softer Frank Quietly aesthetic, leading to extremely emotive facial designs. There is one panel, a close up of Gabby’s face as she looks up at Laura, that has just the right mix curiosity at the next mission and distraction from the pretzel she’s eating. Unsurprisingly, Gabby is the character given the most emotive material to work with that straddles the line between cartooned and realist. The art duos work is effective with Laura as well in subtler ways, she gets some nice side eye beats as the Stepford Cuckoos appear for a chat.

The art teams representation of the Cuckoos goes a long way in making them sympathetic antagonists for this arc. Cabal draws them with an emphasis on their triad, now with cool new cloaks. Their hive minded nature often leads to them being shown as aloof or like creepy demon children, but together there is a real sense of emotional bond between them. A bond that is necessary to buy as their anti-heroic schemes come to light. What they are doing is terrible, but it makes sense emotionally. The Cuckoos maybe the three in one, but Cabal gives enough personality to each Cuckoo so that when they’re alone with one another and their plan to become whole again is revealed those little cracks of individuality appear and hopefully setup more drama to come.

The individual highlights in a given panel work on their own, but like the action sequence, the page design is what makes these sequences work as a whole. In particular a double page diner scene, on the importance or lack thereof celebrating birthdays, between the sisters over some Daken served falafel. Cabal lays out the two pages in 13 panels with the majority of it being a two by twelve gird. Where the earlier spread and follow up page was an example of redundancy between the text and visuals, this spread is an example of them working in unison to enhance the drama. The conversation eventually grows heated as Gabby discovers Laura’s disinterest in her own birthday. As this gulf develops Cabal uses the paneling to emphasize the growing distance between them eventually ending on the duo separated by panel gutter. This macro presentation is supported also by some excellent body language, Laura’s use of her hands and Gabby’s ability to grow and shrink in relation to those jabs, as they bicker like family.

The name of the series is perplexing, but there is that adage about judging a book by its cover. On the inside “X-23” with Mariko Tamaki, Juann Cabal and Nolan Woodard deliver where it counts. Continuing to tell Laura’s story with a different emphasis from the one seen in “All-New Wovlering.”

Final Verdict: 8.0 – Awkward title aside, this is a strong start to the continuing adventures of Laura and Gabby as the creative team mine new areas of emphasis in the characters.